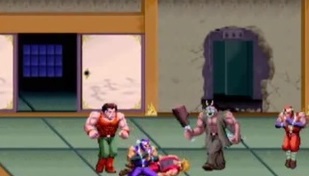 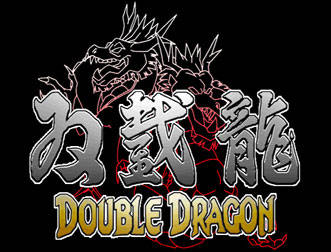 Since it was only released as a digital download for a console that was available exclusively in Brazil, there’s not much of a chance to play this iteration of Double Dragon anywhere else in the world. The only English site that ever published a full review of the game appears to be the Double Dragon Dojo. 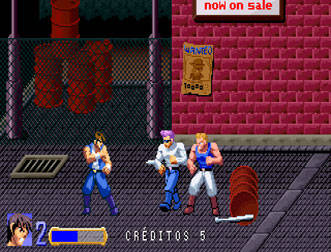 The game is yet another remake of the very first Double Dragon. It uses the expanded moveset from Double Dragon Advance, and similar (though not the same) character sprites, but retains little of that game’s extra stages, enemies or cutescenes, instead introducing its own set of additions. Aside from a range of completely new enemy sprites, there are three entirely new stages. After the familiar first two stages, the Lee brothers make their way along a destroyed highway, with a tubby little martial artist who mostly moves around via cartwheels awaits as the boss. A generic corridoor is protected by a woman swordfighter, who can spawn a set of angel wings as a special attack. Finally, there’s a dojo with ninjas, home to a large enemy with an oni mask and a club he can smash on the ground to cause building parts to drop from the ceiling.

Unfortunately, all the new stages are uneventful, while the familiar second stage is shortened and the forest and mountain area omitted entirely. The backgrounds also look rather drab and sometimes amateurish. The music sounds like a MIDI rendition of familiar tunes, but at least it’s a competent arrangement. 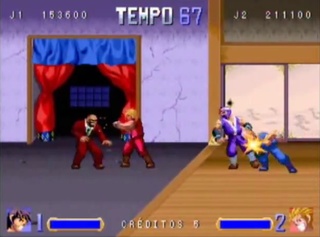 But the game’s major introductions are a faster pace and a more dynamic combo system, which enables the Lee brothers to launch their opponents into the air with an uppercut, juggle them for several hits and finally send them back to the ground with a head butt or jump kick.

Beating the game once unlocks an extra mode, where it’s possible to play through as the bad guys. At first only Williams and Roper are available, but all enemies can be unlocked eventually, all with their respective movesets. 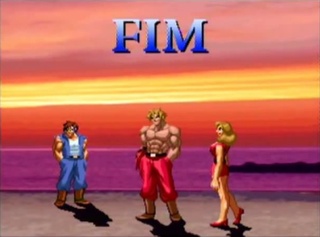 Screenshots are mostly grabbed from Rockmanb’s video playthrough on Youtube.