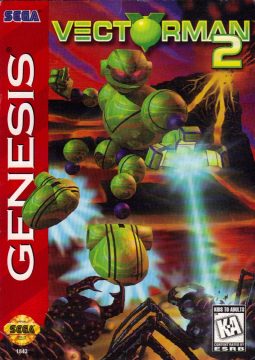 Sega of America’s story is one of the most interesting and troubled in the video game industry. After striking it rich with the Genesis and a slew of classic titles in the early 90s, the Western arm of Service Games quickly fell from grace soon after due to misunderstandings with the boys from Japan, a fierce competition and its own success, with the company resorting to licensing its 16-bit hardware’s production rights to Majesco and churning out budget re-releases of their old hits in order to stay afloat until the Dreamcast came along in 1999. Few new games were released for the Genesis in this period, and even fewer of them were notable additions to the console’s library, with Vectorman 2 sadly not falling in such a category despite its strong pedigree and promising start. 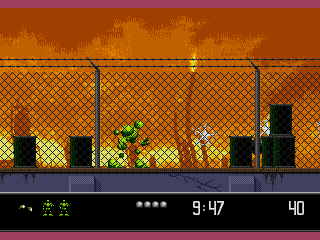 Plot-wise, Vectorman 2 can work either as a sequel or a prequel to the original, one that takes our eco-friendly robot hero to the darkest corners of the Earth in order to fight against an evil horde of mutated bugs and arachnids, effectively ditching its predecessor’s colorful futuristic setting in favor of a darker, more grounded and realistic tone.

Other than this, Vectorman 2 feels and plays much like the original with a few quirks of its own. The biggest difference between the two is in the way Morphs are handled: while the first game doled them out rather stingily and only through power-up containers (floating, spinning TVs in the original, bulbous organic “powersacks” in the sequel), in Vectorman 2 they are dropped by enemies whose offensive abilities the player can acquire, thus making them feel not as unique and/or varied as they were in the original. The morph-focused stages here are also more numerous, but they lack the unique top-down perspective and impressive graphical effects of their predecessors, making them feel more like bland, boring filler than anything else. 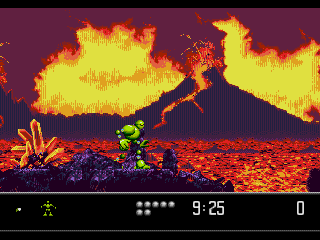 Sadly, bland and boring are the two words which best describe Vectorman 2‘s general level design, at least when compared to the original’s. Stages here are not only generic and unremarkable but also strangely claustrophobic, since most of the hidden pathways, invisible platforms and tough-to-reach secret spots that spiced up the original Vectorman‘s rather standard action-platforming are nowhere to be seen in the sequel, with the “open” and/or vertically oriented stages that the game presents being convoluted messes more often than not. Combine this with the fact that enemies are now much smaller and more annoying than they were before, and you have a brutally hard game that feels cheap even on the lowest difficulty level.

On the other hand, Vectorman 2‘s graphics are an interesting improvement over the original’s, with the multi-jointed, digitized sprites and awesome lighting effects that made its predecessor stand out from the competition looking better than ever here. This is especially notable on the swamp stages, where Vectorman’s laser blasts light up the dark environment around him, creating an impressive chiaro-escuro effect on his sprite, and on the fire stages, where the bright red lava glowing right below the player’s feet creates the impression of colored lighting, something that even Doom didn’t pull off in most high-end consoles and PCs of the time. Backgrounds are now much prettier and more diverse, with much more parallax scrolling and animation, and all bosses (except the fire one) are now huge background objects which show off some clever graphical trickery like the airplane in the first level of the original, thus making their battles play out much more interestingly and memorably than their predecessors’, although they all can be beaten very quickly with the right strategy.

Jon Holland has returned to compose the soundtrack, which is now much larger and more diverse in tone and style than the original’s, once again showing off what the GEMS driver (and the Genesis soundchip in general) can do when in the hands of a talented musician who knows its intricacies. The sound effects, on the other hand, are much more annoying than they were before (especially the Laser Beam’s, which is downright painful to listen to in headphones), and Vectorman himself is now much more talkative than he was in the original, having a deep-pitched, appropriately robotic voice instead of the “rad 90s dude” one he had in his previous adventure (and which players could only listen to if they paid attention and/or had very good ears). 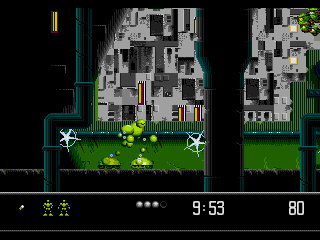 Included among the many never-seen-before bits of Sega history leaked by drx of hiddenpalace.org and Sonic Retro fame in 2008 was an early prototype version of Vectorman 2 which provides some interesting insight into the game’s seemingly rushed development. The first thing players will notice upon booting up the leaked ROM aren’t the clearly unfinished title and splash screens, but rather the fact that it’s clearly built over the original’s code, much like the Genesis Sonic games were successively built one on top of the other (except 3D Blast, for obvious reasons). This connection is best showcased by the inclusion of the entirety of the first Vectorman‘s soundtrack (plus several copies of each song) in the prototype’s options/level select menu, with the only track from the sequel present here being “Reclamation”, that plays in every single non-bonus stage in the proto and which has a glitchy/unfinished version simply titled “Field” on the sound test, as its title is already taken by a copy of the original’s Bunker track on the same menu. This prototype also features a whopping seven test levels and a slew of unfinished stages with varying degrees of completion, with the most interesting probably being the duo of levels titled Quicksilver Lake and Quicksilver Reservoir (which share the same in-game stage number and name, strangely enough) and Lava Falls, which would be classified as a barren, uninteresting test level if it wasn’t for the massive, seemingly pencil-drawn (and thus, scanned directly from a BlueSky artist’s sketchbook) volcano on its background. A later prototype, also leaked by drx in the same batch of ROM dumps, is much closer to the final game in terms of content, despite featuring an unique and rather creepy game over screen where a broken-down Vectorman hopelessly looks up to the light coming in from above in what appears to be a cave of some sort instead of the first prototype’s generic “YOU LOSE” screen or the final game’s fairly uninteresting game over animation. 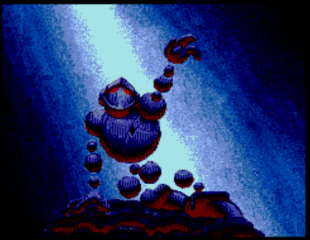 While Vectorman 2 isn’t as good as its predecessor (or most other platformers released late on the Genesis’ lifespan, for that matter), it’s still a good game and an impressive showcase of what the Genesis can do; one whose seemingly-rushed development sadly prevented it from becoming the Diddy Kong’s Quest killer that it was originally intended to be.

It seems that, even after the 16-bit era and the original Donkey Kong Country trilogy was over, BlueSky Studios wasn’t done with the Vectorman franchise yet. There are rumors floating around the internet that the San Francisco softhouse began development on a next-gen sequel to Vectorman 2 as soon as that game went gold in 1996, and these rumors are backed up by a Next Generation Magazine report from the same year and a big batch of concept art intended for the game’s design document leaked online by former BlueSky/Neverhood Inc. artist Ellis Goodson almost a decade later.

Looking through the concept art, it can be deducted that the sequel (which was to be titled either Vectorman 3 or Vectorman Ultra or a combination of both, according to various sources) was going to feature an art style closer to that of the original game, while also implementing some of the more organic motifs from Vectorman 2, and that it was going to feature traditional side-scrolling stages alongside 3D (or possibly 2.5D) levels.

Sadly, Vectorman 3 never came to be due to unknown reasons, although its cancellation is probably related to the slew of problems Sega was facing on the West during the late Genesis and Saturn eras.

Even after BlueSky Software’s demise in 2001, Sega teamed up with Pseudo Interactive (the developers behind the XBOX/PS2/GameCube cult classic Cel Damage) at the height of the PlayStation 2’s popularity in one last attempt to bring Vectorman back to life, one that would take the form of a free-roaming third-person-shooter set to be released around 2004.

Despite prototype footage of the game and playtester reports promising non-stop action-platforming with huge, fully destructible environments, an impressive physics engine, amazing enemy AI and a brand new take on the series as a whole (including new designs for everything a new storyline), the project didn’t go past beta stage due to complaints about it feeling like a Halo ripoff, which were founded mostly on the protagonist’s more militaristic and mech-like new design.

The only remnants of this project are a batch of screenshots provided by IGN, some early alpha footage and a trailer which shows off Vectorman’s new loadout (which includes both a jetpack AND a Just Cause 2-esque grappling hook) and the effects that it would have on the environment, along with a brief snippet of the planned dark-techno soundtrack, which manages to sound both brand-new and close to the original games’ style at the same time, much like the cancelled title as a whole.