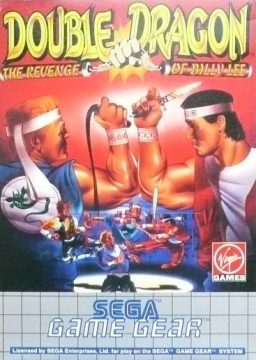 Technōs must have negotiated some very lax deals with its overseas licensees, as is evident by the many bastard children their IPs left around the world. In a fashion similar to Ocean’s Renegade sequels on European home computers, Virgin Games, by virtue of being the European publisher for earlier Double Dragon versions, ended up in the position of creating an entirely new game bearing the Double Dragon name for Sega’s Game Gear. The Revenge of Billy Lee reuses the cover art from the first NES game, but the product inside has nothing in common with it. It also recycles the plot point of Billy’s brother Jimmy being abducted in order to get around the lack of a two-player mode, but here it is the main focus of the story, without so much as a mention of Marion/Marian.

The visual design of Virgin’s effort is actually worthy of the Double Dragon name. The shading clearly denotes it as a Western-developed game, but the pixel art boasts many neat little details and a largely consistent style throughout. While it lacks the dystopian future feel that was only really dominant in Double Dragon II, the stages comprise many series mainstays, including city slums, a stroll around the countryside and even a subway ride like in Double Dragon II for the Game Boy, except here the train is riddled with advertisements for other Virgin titles and you even get to fight on top of the train. The harbor area is new, but fits in well with the rest of the scenery.

The enemies comprise the usual range of thugs and martial artists, where special mention is owed to the punk gals who attack with burning spray cans. Especially the bosses and sub-bosses stand out with cool looks, like a long-haired blond rocker with slashed jeans, a pair of amazons in spandex suits with dazzling hair (one of which hangs from the ceiling throwing bombs while the other fights Billy directly), or the Texas Chainsaw Massacrereject, who might also have been inspired by the second Game Boy game. Someone on staff must have been a huge fan of the band Skid Row – not only is the first stage named after them with several graffitis or labels making references, but the first boss essentially is Bastian Bach, the band’s vocalist at the time.

Unfortunately, the game doesn’t even remotely play as decent as it looks. One of the Game Gear’s two main buttons triggers a standard attack combo, but the other is an awkward hopping attack that turns into a floor swipe when pressed together with “down”, but a jump when pressed simultaneously with any other direction. The standard attacks are utterly unsuited to attack opponents without taking retaliation hits, while the jump attacks have you flinging back and forth across the screen without much control. The opponents are just unfair, and it’s a major challenge to even beat three or four with one life gauge, but every stage has dozens of them. Single opponents have far too much health, too, which is best demonstrated by the bikers – like in Double Dragon 3, you’re supposed to jump kick them off their bikes, but here it takes seven or eight hits, making the whole affair feel more like a wade through molasses than a badass takedown.

The only parts where the odds are at least somewhat close to reasonable are the few instances where you’re granted a weapon. Billy doesn’t only use bats to keep his foes at bay – he also readily picks up guns and cold-bloodedly shoots the thugs down, completely going against the martial arts spirit of the series. But since the enemies also use all kinds of weapons against him, not doing so would be suicide. Unfortunately, at about the halfway point the game completely forgets that it was letting you have weapons, so you’re pretty much lost for the finale.

Despite first appearances, The Revenge of Billy Lee is a horrible, borderline unplayable mess, the bottom of the barrel as far as Double Dragon titles go. Only the most tenacious players who aren’t ashamed of abusing only the cheapest and safest maneuvers repeatedly against the far too long waves of enemies will ever face the weirdly eldritch final boss.