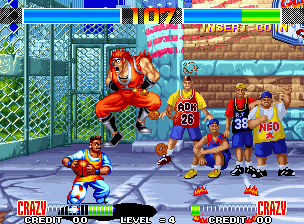 Even though the fighting game genre peaked in popularity in 1992, it probably had its highest level of proliferation in 1994. There were seemingly endless releases of fighters for the arcades and SNES that year, and even Capcom finally branched out beyond their Street Fighter series with the original Darkstalkers game. SNK was busier than anybody, and had already established several successful fighting game franchises like Fatal Fury, Art of Fighting, and Samurai Shodown. Their biggest series ever, King of Fighters, was about to make its debut as well. They also had a relatively popular series called World Heroes, developed by Alpha Denshi (more commonly known as ADK) was basically a second party to, and former internal division, of SNK. Confident in ADK’s track record, they released yet another original fighting game from them that year called Tsuukai Gangan Kohshinkyoku in Japan, or Aggressors of Dark Kombat in America – the latter title’s acronym also being the name of its developer. Strangely, the Japanese title translates as “Thrilling Intense March,” which is probably the most awesomely nonsensical name for a video game ever.

Joe is a badass street fighter from Kanto who has traveled to Kansai looking for opponents. Years later, he would make a cameo in Neo Geo Battle Coliseum.

Goh is a thug from Kansai who is waiting for Joe to arrive so he can kick his ass. He’s supposedly trying to take over Japan, which is just completely ridiculous.

Lee is a Korean born martial artist living in Japan, where he works for a school. He gets involved with all of these other characters after Leonhalt causes problems at the school where he works, and he sets out to kick his ass.

Kisarah is a schoolgirl who is chasing after Joe looking for a date. She’s a playable character in Neo Geo Battle Coliseum, and also appears in SNK vs. Capcom: Card Fighters DS.

A Canadian wrestler who is attempting to create his own wrestling league. He has come to Japan looking for people to join him. He also appears in SNK vs. Capcom: Card Fighters DS.

Bobby is a little kid who’s determined to be a professional basketball player, so he travels the globe hoping to be recruited. In the most insane character ending in fighting game history, he actually makes it to the NBA. Also, where the hell are this kid’s parents?

Leonhalt is a street fighter from Germany who came to Japan to become the greatest fighter of them all. He’s supposedly a refugee, but the game doesn’t do anything to explain what exactly he’s taking refuge from.

Fuuma is that ninja guy from World Heroes. He made it to 1994 when he got lost while traveling through time. Makes no sense to me either. He lacks most of his moves from World Heroes, but gains an original move that allows him to teleport. 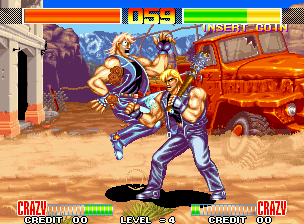 Both SNK and ADK developed fighting games always had some kind of novelty to make them stand out from the crowd – like plane switching in Fatal Fury, huge characters and great graphics in Art of Fighting, weapons in Samurai Shodown, or wacky characters and death matches in World Heroes. Aggressors of Dark Kombat went even further by taking the basic gameplay of fighters and combining it with elements of beat-em-ups. Given the thematic similarities that exist between the two genres, and the popularity that they both shared in the early 1990s, it was probably only a matter of time before somebody took a shot at combining the two. The result of their experimentation is one of the most original fighting games ever made.

As original as the game is, its controls setup is pretty simple. Basic attacks are executed in a similar manner to Art of Fighting 2, where you quickly tap A or B for a light punch or kick, and hold the button for a strong punch or kick. There are a few other elements that are similar to standard fighters, like the ability to dash forward or backward. Doing so requires only a single tap in any direction though, which can make the controls slightly inconsistent depending on the quality of the joystick. You have a few specials for each character, and, as would be expected, blocking is performed by pushing away on the joystick. Otherwise, Aggressors of Dark Kombat is VERY different from your standard fighting game.

First off the health bars are extremely long for a fighting game, consisting of three layers. While the match ends after just a single “round,” attacking your opponent will let you regain health (similar to some wrestling games) up to the maximum level of the current layer your health has been depleted to. In a nice nod to cheesy eighties martial arts movies, each background has two BGMs, with the music becoming more more “intense” after the first layer of one’s stamina is beaten out of them. 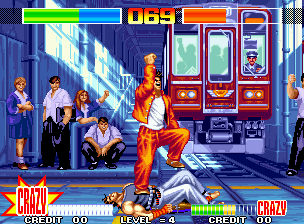 The playing field in Aggressors of Dark Kombat is structured like a beat-em-up or wrestling game, so you can’t jump by pushing the joystick up, and there’s no way to crouch, at all. Instead, the joystick is strictly for moving your character around, and jumping is performed by pushing C. Despite Neo Geo machines having four buttons, ADK didn’t assign any action to the D button.

The strangest element to the gameplay is the grapple system, which is kind of similar to wrestling games. To perform a grapple, approach your opponent and push the joystick towards them while hitting A and B at once. After initiating a grapple, you can perform a throw by pushing either attack button and/or holding the joystick in any of a few directions. It’s also possible to reverse a hold by pushing the A or B button at the exact right time.

Attacking your opponent will build up the “Crazy Meter” at the bottom of the screen, and when it maxes out you can preform a Crazy move (GANGAN move in Japan) – if you connect with it, then you automatically win the fight. This causes a little blood, but only in the Japanese version.

Its beat-em-up elements go beyond just having a jump button and a beat-em-up-style playing field. There are also weapons lying around on the ground. These can take the form of molotov cocktails, baseball bats with barbed-wire on them, swords, or shovels. Baseball bats, swords, and shovels are standard melee weapons, and molotov cocktails will leave fire for a few seconds after they explode that can burn either character. Weapons are generally available when a level begins, but they can also be hurled onto the playing field by spectators, or found in destroyed bits of terrain – just like how you would find weapons in Final Fight, or most other beat-em-ups. Another technique taken from this genre is the ability to perform vertical dashes in either direction by double tapping up or down on the joystick, a la Streets of Rage 3. 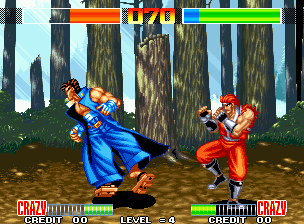 As far as its presentation goes, the characters aren’t fantastically designed, but several of its backgrounds are well animated, and have an impressive amount of action in them even compared to more recent fighters. Its spectators have a great deal of character, as if they were animated separately, rather than as just part of a crowd. For example, a few of them will even get up and pace around on their own. Keep in mind that characters in the background of fighters in the early to mid-1990s rarely did anything other than loop through a few frames, so it’s pretty cool to see so much attention put into these kinds of details. Most of the spectators are very active, and will spend their time hooting and hollering, and cheering on the combatants, which enhances the street brawl feel of the fights. However, not every background is as busy as its better designed stages are – a couple of them are just things like a forest or a desert, and are somewhat bland. Its music is sufficient, but falls short when compared to the soundtracks for many other games made on the hardware.

There’s also a bit of humor that comes from the win and loss quotes, the match up specific intro quotes, and when characters get burnt by molotov cocktails and hop around with their ass on fire. Interestingly, in the ending for each combatant the game’s entire cast is shown in SD form, with the character that you finished the game with in the middle of the group riding Leonhalt’s pet tiger. Lastly, characters will begin to sweat after they have been fighting for a while. I’m not even talking about normal sweating – I mean it pours off of them in huge drops, and sprays all over the place when they get knocked down.

Most fighting games are all about highly trained martial arts masters throwing fireballs, electrocuting each other, and performing all kinds of other crazy magical attacks – all fighting together in a well organized international tournament, or as part of an elaborate plot that determines the fate of the land. For the most part, Aggressors of Dark Kombat totally avoids these conventions – there are still plenty of moves that would be impossible to perform in reality, but, excluding each character’s GANGAN move, the fireballs and insane flashiness that is to be expected from the genre is almost completely absent. It seems that its developers were instead going for a simple street brawl feel to the fights, and it achieves that fairly well. Its characters are mostly just amateur street fighters getting into street fights, and there really isn’t any grand scheme to its events. Combined with rather nonsensical presentation, it all comes off kind of like a fighting game equivalent of a campy B-movie. This lends the game a great deal of charm, and has contributed greatly to Aggressors of Dark Kombat building up something of a cult following for itself over the years.

The biggest problem, however, comes from the grapple system. Executing a grapple is relatively reliable, but the timing for escaping a hold is far too specific for it to be consistently doable. After a few opponents, the CPU will be pulling of grapples one after another with impeccable timing, and there won’t really be much of anything that you can do about it. The CPU’s distance judgment is also way too good, so they’ll eventually start grappling whenever they’re in range, before you’ll be able to perform a grapple yourself. Yes, you can just avoid the technique if you prefer, but the game is so grapple oriented that you really do have to be able to execute throws consistantly to be successful. However, the CPU’s ability to both initiate and escape a grapple is way better than yours could ever be, and the game ends up being needlessly difficult as a result.

Aggressors of Dark Kombat isn’t particularly good, either, but it’s definitely worth trying, if only for a change of pace. Just try to keep in mind when you begin playing it that it has to be approached on its own terms – if you try to play it like a standard fighting game then you’ll get completely annihilated. Practice a little with the grappling system, and look for a FAQ at GameFAQs to learn your character’s moveset, and you’ll get much more out of the game.

Aggressors of Dark Combat appeared on SNK Playmore’s ADK Tamashii compilation for the PS2 in December 2008, which was initially only released in Japan, but was released worldwide for the PS4 as a downloadable title. It has ugly filtering though, and suffers from input lag.