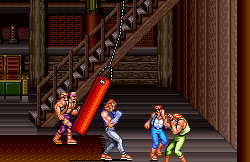 After the far-out and mediocre Double Dragon 3, Super Double Dragon marks a return to form for the series. Developed exclusively for the SNES, it is basically a reboot reinterpreting the plot of the first game, except Marian is now a cop who was training martial arts at the Lee brothers’ dojo before vanishing during an investigation of the Shadow Warriors. Instead of supernatural world traveling adventures, it’s back to simply beating up hoodlums in the hoods of Not New York. 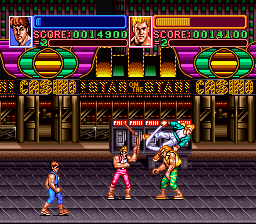 The gameplay has returned to a methodical, slow-paced combat system with no running. In addition to their standard arsenal, the heroes can finally take a defensive stance to block incoming blows, which even enables them to grab their opponent’s arm for some immediate retaliation. The controls are very flexible and responsive, allowing for cool maneuvers like a backwards kick in the middle of a jump or holding approaching enemies at bay with your feet while holding on to a grabbed enemy. 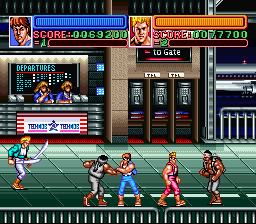 There are no more complex button combinations for advanced moves, but instead the game introduces a special meter that can be charged with the shoulder buttons. When charging it just a little, you can unleash a strong backhanded blow or a roundhouse jump kick. With the meter more than half full, either attack button executes a flying spin kick across the screen (think Ryu and Ken’s Hurricane Kick in Street Fighter). Charging it to the max doesn’t activate a special move but makes the heroes stronger for a few seconds so they can knock down enemies with a single punch. It takes quite a while to charge the meter and it starts decreasing rapidly once the button is released, so it’s not always easy to make use of its strongest features. 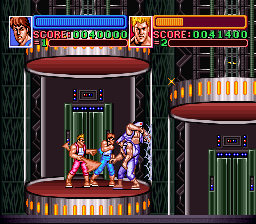 Weapons are back in full force and as mighty as ever. Unfortunately you never get the double Chinese swords wielded by one of the standard enemies, so melee weapons are limited to nunchucks and staffs, but the gangsters come at the heroes with a variety of throwing weapons, from the familiar knives, barrels and pipe bombs to a boomerang that even returns to its owner. The knives still deal an unfair amount of damage when they hit you, but as usual they can be intercepted in midair. Barrels can be kicked around again to resolve crowded scenes, for which there’s now a special low leg move, performed by pressing down together with the kick button. In the Game of Death style tower dojo of stage 3, the punching balls and bags can even be used as cool environmental weapons when there are attackers approaching from the opposite side.

With seven stages, Super Double Dragon is almost twice as long as previous games in the series. Several parts are reminiscent of the first Double Dragon, but especially the first half has a few cool new locations, including a casino, an airport where you fight the boss on the runway, or a ride on the top of a truck. 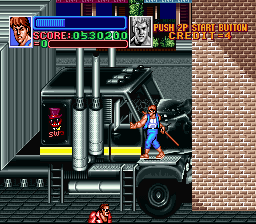 But with the extended length comes also the first problem of the game: It still has only four basic enemy types you keep fighting throughout the entire game, and Billy’s palette swap Jeff hilariously/embarrassingly makes a return among them. As usual, the bosses join their ranks almost immediately after their first appearance, but most of them are just bigger thugs with none of the personality Abobo or Burnov displayed. Even the leader of the Shadow Warriors is just a big muscular guy like the Westerners Bruce Lee or Jackie Chan would fight at the end of their movies. Only two bosses stand out from the crowd: the Chinese kung fu masters who can grab the Lee brothers by the legs when they try to attack them with kicks, and a fat guy who looks like Krusty the Clown without makeup and can roll into a ball to fly across the screen like Blanka from Street Fighter.

The genre-typical lack of variety aside, Super Double Dragon is almost a great game – which makes it all the more frustrating how unfinished it is. Technōs had originally planned to include a lot of dialog and cutscenes. Apparently the game had to be rushed to the market for some reason or another, and this entire aspect of the game was axed, leaving not even as little as the impactful two-second introduction of the original arcade game. According to co-designer Muneki Ebinuma, the final boss was supposed to be an old friend of Billy and Jimmy. After the fight it would have been revealed that he was being controlled by a mysterious shadow all along, which of course would have been the true final boss, fought inside a burning building. The flame graphics for this and some of the character portraits for text boxes still remain in the ROM. If it weren’t for the manual and a short scrolling text at the end, it wouldn’t even appear like the game was supposed to have a story at all. 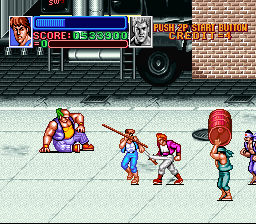 But even without knowing any behind-the-scenes info many cuts and omissions are glaringly obvious just by looking at the game. In the first stage the heroes ride a glass elevator with huge cracks at one side, which were obviously meant to burst as attackers jump in, but they never do. The final stage is the most incomplete – at one point you can do wall jumps in thin air and there’s a platform with gaps at the sides where anyone tossed over the edge would fall down, but there’s just a regular invisible floor at that position. Aside from the gym installations, there are hardly any interesting traps, either.

Additionally, the entire game runs only at 30 frames per second. It’s not stuttering as badly as Double Dragon 3 and prevents the heavy slowdown of the original arcade Double Dragon or many other early SNES action games, but the animations always look a little choppy because of it. 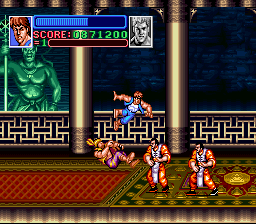 The audio department also suffers a lot from the lack of polish. The sound effects lack any impact, and there are a lot of weird glitches. Sometimes the final blow in a combo will be quieter than the previous hits, even though it is supposed to be the stronger finisher. Sound effects also jump between the two stereo channels with no rhyme or reason. There’s not even separate boss music when facing the final foes of each stage, further diminishing their already not too impressive presence. The most baffling part is that several compositions missing from the game, including a boss theme, are actually in the ROM as well, but just were never scripted into the game.

Similar to Double Dragon 3 in arcades, the Japanese version, known as Return of Double Dragon, fixes a few smaller issues. The US version has a really boring title theme, but Return replaces it with the classic Double Dragon theme (which later accompanies the final encounter like in the original Double Dragon), whereas in Super Double Dragon it is only playing hidden away in a stage in the middle of the game, where its placement feels completely arbitrary. Also added is an options menu with a sound test that includes some of the unused music. 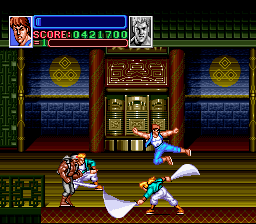 The Japanese version does not fix any of the game’s other issues, but at least the menu allows choosing the number of credits and extra lives. The standard difficulty also underwent a little bit of rebalancing, especially nerfing the knives. Most of it is just subtle tweaking, but the biggest change involves the boss fight in the third stage: in Super Double Dragon, the Lee brothes face a pair of twin martial arts masters one by one, whereas in Return of Double Dragon they have to be fought together. The final stage is also stretched out a bit, leading to another corridor with some stairs going up and down and a new boss room.