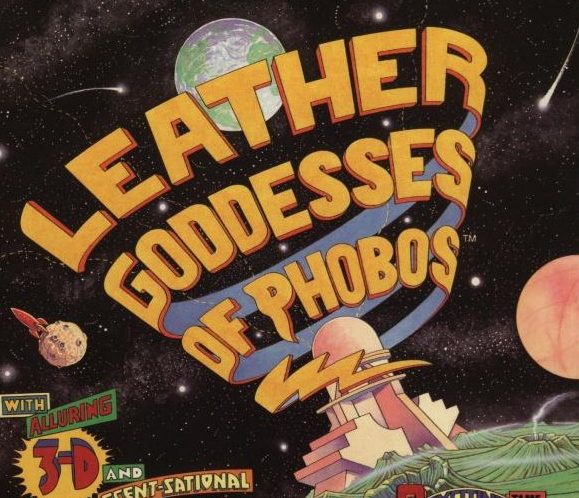 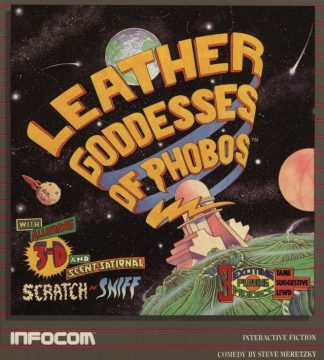 One of Infocom’s most popular text adventures, Leather Goddesses of Phobos (often shortened as LGOP) began as a joke title that eventually morphed into its own game, and just happens to be one of the company’s funniest. As an innocent earthling in a small bar in Upper Sandusky, Ohio in 1938, you are abducted by the (apparently) evil Leather Goddesses of Phobos, who wish to take over the Earth and use it as their own pleasure dome. Despite this being a not-so-bad fate, you are tasked with stopping them.

The game is unique in that if offers the ability to play as a male or female. However, your gender is not explicitly chosen, but is rather determined for you depending on which bathroom you enter at the beginning of the game. The differences between playing as a male or female are minimal, as the choice mostly changes a bit of dialogue and determines the gender of certain other characters – your companion, Trent or Tiffany, will be the same sex as the player, while the various potential sexual conquests will always be the opposite gender. A modern view would criticize this for forcing heterosexuality, but the fact that it ever tries to accommodate female gamers at all already puts it several steps ahead of the adventure game pack. 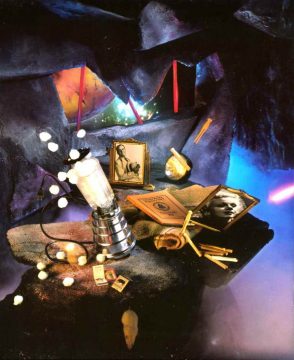 Your ultimate goal is to construct a Super-Duper Anti-Leather Goddesses of Phobos Attack Machine, a concoction haphazardly advised by your partner, but naturally, they don’t have any of the necessary tools. These include a rubber hose, a picture of Douglas Fairbanks (or Jean Harlow), some cotton balls, a blender, an eighty-two degree angle, a headlight from a 1933 Ford, a white mouse, and a Cleveland phone book. After escaping from prison with your partner, your quest involves exploring the jungles of Venus, the canals of Mars, and the alleys of Cleveland to find each of these incredibly arbitrary artifacts.

Connecting each of these disparate locations are black circles, which act as portals between the areas. As such, the game isn’t entirely linear, and allows you to explore Meretzky’s bizarre world before the final confrontation against the Goddesses. There are a few possible dead-end situations, and while the black holes are technically one-way, you can keep exploring and finding new ones, which will eventually loop you back to a previous location. The worst of the puzzles is a maze which, despite being entirely mapped out with a document enclosed in the packaging, requires that you take specific actions every few turns or else some baddie will screw you over.

The packaging includes a comic book dubbed The Adventures of Lane Mastodon: Lane Battles the Shameless Leather Goddesses, a kitschy look at the battles against the Leather Goddesses in the distant year of 1988. The original release has this comic in 3D and includes a pair of 3D glasses. It’s a fun little read, and also provides a few necessary hints to beat the game. However, it might give the impression that the actual game is one huge Buck Rogers parody, when it really isn’t. There are at least a few references to goofy ’50s sci-fi, like a situation involving a mad scientist sticking you in the body of a gorilla, but it’s much more of a random screwball sci-fi comedy than anything else.

In one of the castles on Mars, you learn of the horribly tragic story of King Mitre – similar to King Midas, except when he touches of people, they turn into forty-five degree angles. Throughout the course of the game, your companion will die in increasingly ridiculous manners, only to show up unscratched shortly thereafter with brief, increasingly far-fetched stories behind his/her continued existence. One of the items you get is a machine called a “Tee Remover,” which removes the “T”s from any item you have. (For fun, try turning the rabbit into a rabbi.) Much of the text is written with the wit typical of Infocom (and famed implementer Steve Meretkzy in particular), either in amusingly understated ways (“You feel uneasy as the mad scientist locks the door behind you and dissolves the key in a vat of acid.”) or incredibly silly ones (upon returning an opponent’s sword after knocking it out of their hands: “As Thorbala accepts the sword, she realizes that such a gesture is the final proof that you are the good guy, and therefore she hasn’t got a chance of winning. Being a practical person, Thorbala saves both of you a lot of time and aggravation by goring herself on her own blade.”)

But the most novel aspect is the way LGOP treats its more “mature” elements. There are three different levels of raciness – Tame, Suggestive and Lewd. The manual equates these to the movie ratings G, PG, and R, but given the lack of pictures, even the Lewd level isn’t all that explicit, although the writing is substantially better than Sierra’s Softporn Adventure. But it’s worth it to save the game before any randy encounters, then reload and switch to Tame mode, just to see how the game handles them. During your first run-in with a harem, instead of letting you get down and dirty in a paragraph of relatively ribald prose, it provokes you into having a discussion with your potential partner about the merits of Jules Verne. The parser will occasionally feign ignorance, innocently proclaiming that it “doesn’t know the F-word” if you try anything. Given all of the warnings in the intro text about potentially offending the Moral Majority, it’s not nearly as randy as it wants to be, at least by modern standards, but it is pretty damn funny. This same basic idea was also implemented in Legend Entertainment’s Spellcasting series, also designed and written by Meretzky

A number of other gimmicks round out the feature list. In addition to the comic, the box also includes a scratch and sniff card – at various portions of the game, it’ll prompt you to take it out and give a whiff. These smells are thankfully not too offensive, as they include pizza, chocolate, perfume, garlic, and, of course, leather. LGOP does use the same Boss Key function as Leisure Suit Larry, which will bring up a screen that looks like Cornerstone, Infocom’s database software. Of course, the data elements look slightly suspicious upon close examination, like inflatable milkmen and peanut butter spatulas. And in a move which was undoubtedly designed to infuriate text adventure veterans, each task gives a randomized amount of points, and the game continually changes the maximum score, refusing to give the player any real sense of numerical progress.

It’s an innovative, silly and weird little game, and while its closing moments promised a sequel, it didn’t show up for another six years, and disappointed more or less everyone.