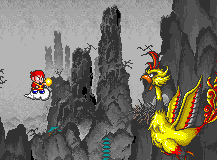 For the most part, there is little remarkable about Chuuka Taisen, which translates to “Great Wizard of the Middle Kingdom”, but more often known by its localized name Cloud Master. It’s a sidescrolling shooter from the late ‘80s, pretty much like any other sidescrolling shooter from the late ‘80s, which was developed by Hot-B and published by Taito. Its big draw is that it takes place in ancient China, as you control a Monkey King-style character named Michael Chen who flies on a cloud, shooting down enemies like flying ramen bowls, stylized Buddhas, evil pig heads, and slightly racist caricatures of Chinese people. 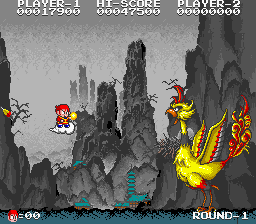 At any rate, Chuuka Taisen is a tough little game. Your standard shots are pretty weak, and even after collecting a few power-ups – which are sparsely distributed through each stage – you feel a bit underpowered. After killing certain foes, you’ll uncover a shop entrance, which allows you to pick one of several subweapons. (Amusingly, each level has a different shopkeeper – one of them has a bowl of ramen for a head.) These includes bombs, multiple directional shots, flame wheels, and other such inventive shots. Although you can only choose from four weapons at a time, they change with each shop, so there’s a pretty decent variety. They’re still pretty weak, but they’re much more versatile than your regular weapon. The secondary weapons have unlimited ammo, at least until you die. Dying also takes you back to a checkpoint earlier in the level.

Classics like R-Type and Gradius have similar checkpoint structures, but they both have one major aspect that Cloud Master doesn’t – quality level design. Cloud Master features the same background repeated over and over and over, without any variation in the landscape, and only the various waves of enemies to differentiate one area of the level from the next. Compared to some other shooters, it’s not too ferociously difficult, but it quickly grows tiresome. The only really impressive graphics are the huge, colorful bosses – ranging from a ferocious Chinese warlord to a cool sunglasses-wearing Buddha – although they’re barely animated. 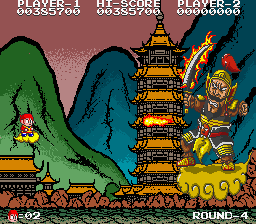 There are only five levels in Cloud Master, making this a quick and dirty game. By all accounts it’s a pretty mediocre title, yet for some strange reason, it seems to have been ported to almost every major console at the time. Most gamers outside of Japan are probably most familiar with the Sega Master System version, which was ported by Hot-B and only released in North America and Europe. It was also released on the Famicom, ported by a company called Disco. Both are competent ports, although the Master System version has slight graphical edge. 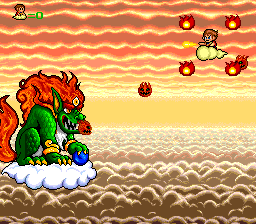 The PC Engine version, dubbed Gokuraku! Chuuka Taisen, is actually a slightly enhanced port. The graphics have been redrawn and actually look a little bit better than the arcade game. There’s a small intro cinema, although the segments with the wizard between levels have been removed, and there’s only one shopkeeper throughout the game. The levels are mostly similar, but have been altered slightly in certain cases – for example, in the second level, you go into an underground cavern halfway through the stage. Most importantly, you can now press the I button to turn around and attack enemies coming from the left side of the screen. The boss fights are all completely new, and force you to take advantage of this ability. 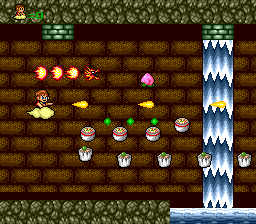 The MSX2 version, distributed on disks, is pretty similar to the Master System version, since it was also ported by Hot-B, although the color palette is different. However, the scrolling is choppy, and some of the enemies are missing. The X68000 version, ported by Sharp, is basically arcade perfect, although it’s a bit easier, and has some slightly improved music.

Even though it received nearly half a dozen ports, Cloud Master never saw a real sequel. Yet, in 2007 a small publisher called Starfish bought the rights from Taito and produced a remake for the Wii. (Starfish are also the folks behind Heavenly Guardian – the remnants of what used to be KiKi KaiKai 2 – and the DS port of Devilish, another questionable remake.) It was released in Japan as Shin Chuuka Taisen: Michael to Meimei no Bouken (“Michael and Meimei’s Adventure”), and published in North American by UFO under the name The Monkey King: The Legend Begins. 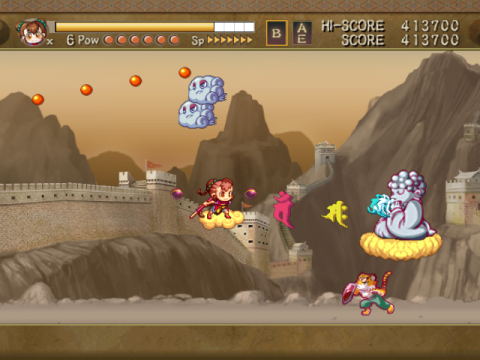 The biggest change is obviously the graphics – the main characters now explicitly resemble monkeys, and the requisite Story Mode has them babbling with each other, conversing with villains, and the usual throwaway stuff. All of the graphics are now high res (for standard def TVs) 2D. The spritework itself isn’t too bad, and some of the bosses look alright – especially the final foe – but they’re once again barely animated at all, and it comes off as kind of cheap. The backgrounds, on the other hand, are appalling. The original arcade game was kinda dull, but at least it was bright. Everything here looks severely washed out – for a game that’s supposed to be colorful and light-hearted, instead it looks drab and depressing. And they’re still just as repetitive as in the twenty year old arcade game.

The game itself is pretty much the same as the original arcade release. You’re supposed to play with the Wii Remote turned on its side – the big gimmick is that you can move the controller and tilt the screen, making it scroll faster or slower, depending on the direction. It makes the stages a little less dull, since the action can be made to move along at a faster pace, or slowed down to catch power-ups, but there’s really little benefit in speeding through a level. 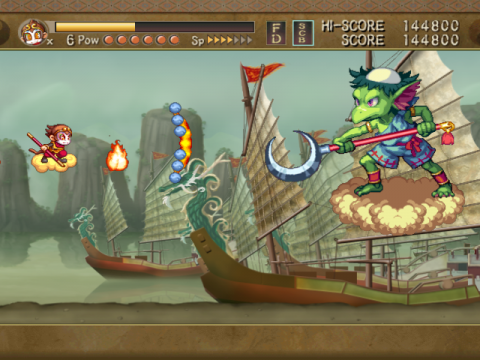 You still start off in an extremely weak state, and need to power up to get anywhere, with one major problem – you’re extremely slow. The original game featured speed-up items, but your default speed was quick enough that you didn’t need them. Here, you need to gather at least three of them to reach an acceptable speed. Additionally, the game is much easier – you have a life bar and can take several hits, plus you resurrect automatically when you die. You’re sent back to the beginning of the level when you run out of lives, but still, what was originally a difficult game is now easy and insubstantial, even on the hardest setting.

Most of the levels are the same, with the addition of one totally new level which takes place in Hell. Here, you refight the old bosses, then take on a new final enemy. After this, you need to go through all of the stages in reverse, flying from right to left. It is an interesting twist, but it’s really not enough to save the game. 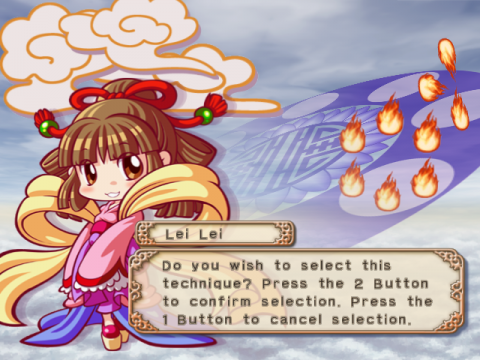 It’s still baffling how this even got made to begin with, considering it’s a mediocre remake of an already mediocre game. The Japanese version is almost understandable – potentially it could sell on nostalgic name value, as “long in the tooth” classic gamers may remember the name and pick it up. The bright cover artwork might also fool buyers into thinking it’s a kids game. On the other hand, no one outside of Japan has particularly fond memories of Cloud Master – you can’t even make the correlation easily due to the title change – and the cover art and localized name are incredibly generic. 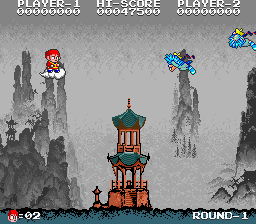 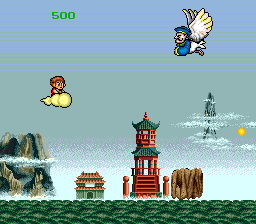 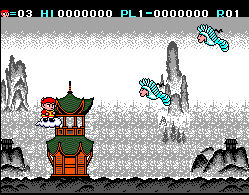 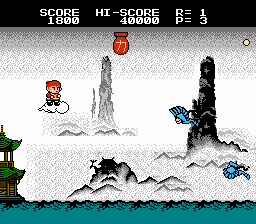 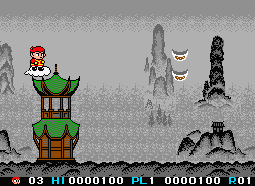 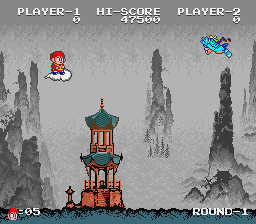 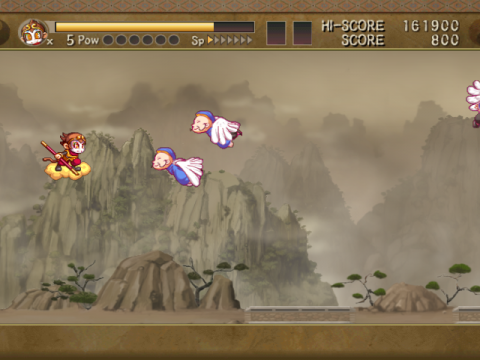 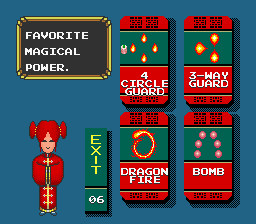 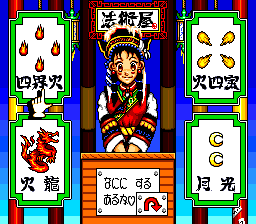