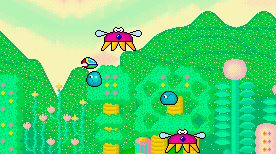 Sega’s Fantasy Zone, designed by Yuji Ishii (Flicky, Teddy Boy, Spatter), released in 1986 for the Sega System 16 board, is heavily inspired by Eugene Jarvis’ Defender, although it provides a unique Japanese take on the formula, one which not only refines the controls and mechanics, but adds a thick layer of overtly pastel cuteness. 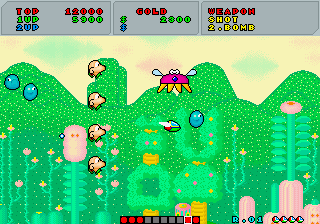 The hero of the Fantasy Zone series is Opa-Opa, a rotund egg-shaped ship that appears to be sentient. He has a pair of wings for flying, and sprouts feet when necessary. Opa-Opa’s design shares a lot with Konami’s TwinBee, and both series helped define the subgenre affectionately known as the “cute-em-up“.

Unlike many side-scrolling shooters with auto-scrolling, Opa-Opa can fly in any direction, and the stages loop horizontally. The goal is to fly back and forth destroying all the enemy generators. Once you do, you’ll fight some huge boss character, then move on to the next stage. There are eight levels in total, each with adorably cutesy names: Plaleaf, Tabas, La Dune, Dolimicca, Polaria, Mockstar, Pocarius, and Salfar. The final stage is a boss rush, which culminates in the battle against the final enemy. 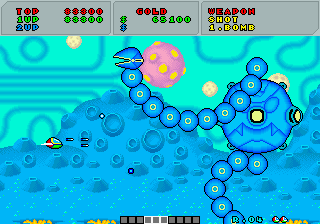 The controls are initially a bit tricky to get the hang of, since your ship has a sense of inertia and continues to move even after you take your hand off the joystick. The camera often has trouble keeping up, making it difficult to see what’s in front of you. Once you get over this initial hurdle, Fantasy Zone becomes an absolute blast to play. 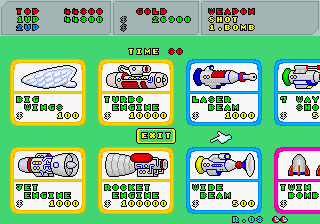 Rather than simply collecting power-ups like most shooters, Fantasy Zone lets you buy them. Opa-Opa initially only has a simple twin gun and bombs, which are lobbed at a low arc. Every bad guy drops coins when defeated, which can be used at a shop, accessed by flying into a large red balloon. Inside, you can purchase wings and engines (speed ups), an assortment of lasers and spread guns, more powerful bombs, and even extra lives.

The primary weapons have time limits, after which they disappear, while certain bombs, like the 16-ton weights, can only be used a single time. However, the special bombs are activated with the regular bomb button, so they replace other bombs until it’s used. You’ll also lose all of your equipped items when you die, which is a huge pain when fighting bosses, since you can’t re-equip yourself after perishing, leaving you underpowered. 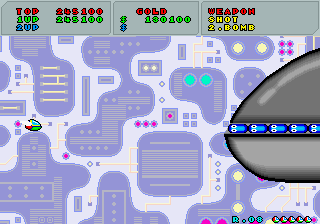 There’s a lot of economic strategy that comes into this. You can buy the fastest engine so you can swipe up all of the coins dropped by bosses, but doing so will often make the boss battle more difficult, since your super fast speed makes it hard to dodge with precision the many projectiles spewed out. It’s actually a good idea to buy multiple weapons – once you run out of one, a little “Select“ balloon will pop out, allowing you to switch to another weapon. It’s also handy for a breather, since the later stages can become filled with enemies and their numerous projectiles.

Furthermore, each time you buy something, the price of the item increases for the next time. This means you can either blow your money on weapons all throughout the game to make everything easier, or save up your cash for the final stages, in case you need it to buy extra lives. You’ll want to do this, because there’s no way to continue. 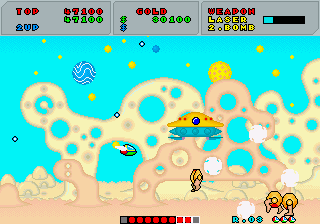 Beyond its unique mechanics, Fantasy Zone creates one of the most beautiful game worlds ever known. Its levels are filled with green meadows, shining rainbows, bright waterfalls, and enemies with big goofy grins that only seem slightly annoyed when you pelt them out of existence with your laser guns. Its huge boss characters possess their own strange looks and personalities. The first boss is a giant block of wood that vomits leaves; the second can only be described as a frowning yellow gourd, surrounded by orbs, which pops out deadly sprouts from its top. Later enemies include a legion of deadly snowmen and a maliciously grinning brick which disassembles and reassembles itself around the screen. At the end, the final enemy, a gigantic ship similar to Opa-Opa, is revealed to be his father, a strangely tragic twist in the otherwise impossibly peppy game world. 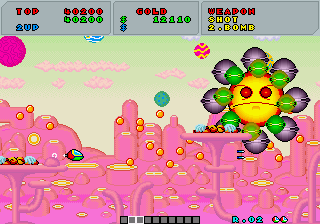 The music, reflecting the colorful visuals, is a selection of warm, bouncy tracks with a distinctive Latin flavor. Aesthetically, it’s almost impossible to play Fantasy Zone without feeling a sense of incredible happiness, which ironically contrasts against its rather high difficulty.

Fantasy Zone was quite popular in Japan, though never quite garnered the same amount of respect overseas, with its bright colors perhaps being too off-putting. The regional versions are practically identical – the intro and ending text is in English in both releases – though the overseas release has a different arrangement of the song “Hot Snow“.

The Master System port can’t quite match the arcade graphics, since it can only handle 32 colors, rather than the 256 colors of the arcade version. The parallax background scrolling is gone, as is the in-game radar, plus the music is converted poorly. And yet, it captures the gameplay fairly well. Some of the bosses were too much for the machine to handle; two of them are changed completely, including the gigantic fish and evil turtle. The background also disappears for each boss encounter. There are only six enemy generators in each level, instead of 10 like in the arcade version, plus they no longer change color to reflect their health.

There are two Fantasy Zone adaptations for the Nintendo 8-bit systems. The Japanese Famicom version, ported by Sunsoft, is comparative to the Master System version, and still succeeds in looking decent despite being limited to 16 colors, plus it even manages to keep the radar. 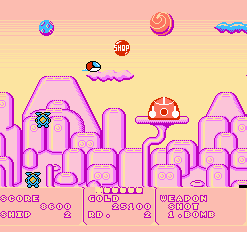 A few years later, Tengen released their own version for the Nintendo Entertainment System. This version has completely different graphics to the Famicom game and not only looks substantially worse, but has funky controls and lots of flickering. The version on the TurboGrafx-16 comes the closest to the arcade, but the parallax scrolling is also absent, and the music is really quite bad. 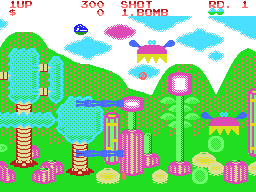 There were also a few computer ports in Japan. The MSX home computer version has terrible graphics and unbearably choppy scrolling. The Sharp MZ version is even cruder, with colored squares and triangles used as graphics, though it’s cool in an abstract art kind of way. 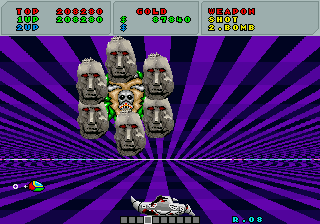 The X68000 version, released in 1989 by Dempa, is practically arcade perfect, along with a few bonuses. There’s a totally new, hidden level based on Space Harrier called Dragon Land. 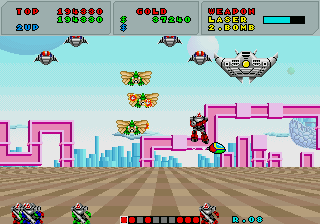 To reach it, you need to break the radar down into numbers. Starting at the right side, count 1, 2, 3, etc. In each level, the first pod you need to destroy corresponds to that numbered pod on the radar. For the first level, you have to destroy the #1 pod first, second level destroy the #2 pod first, etc. Instead of just dropping a regular coin, they’ll drop a letter. If you collect all seven, it’ll spell out HARRIER. When you beat the seventh stage, you’ll be taken to Dragon Land. There’s also a hidden options screen (hit the “touroku” key), which lets you set an “Arrange“ soundtrack exclusive to this version.

The first console arcade perfect port was for the Sega Saturn, released only in Japan under the Sega Ages label. It includes the original soundtrack as redbook audio, in addition to a vocal song (along with a karaoke mode), and a replay mode with an expert playthrough. There are also hidden options, including the ability to continue. 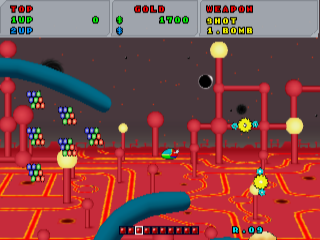 The PlayStation 2 version of Fantasy Zone, released in 2003 as part of the initial run of the Sega Ages 2500 budget line (as Vol. 3), is fairly decent. Opa-Opa, the enemies and the bosses are polygonal models, while the backgrounds are still flat 2D albeit with some effects to make them seem 3D. The style faithfully emulates the 2D original, but the ugly interlacing artifacts diminish the appeal. Thankfully, the game plays almost perfectly regardless. 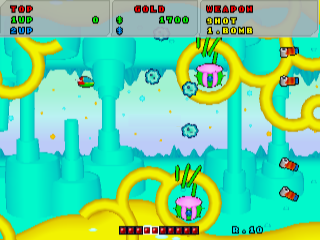 The music tracks are straight from the arcade game. In addition to a fairly faithful “Arcade Mode“, there’s also an “Original Mode“. This includes fancy camera pans at the beginning of each level to show off the polygonal models, as well as new post-boss bonus stages, where the view switches to a behind-the-back perspective. Here, the boss explodes and vomits out bonus coins, which you try to collect. Each scene lasts 30 seconds though, so they quickly grow tiresome. 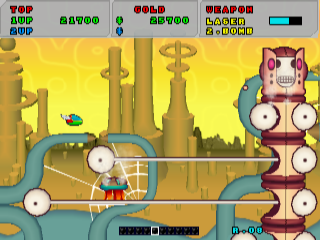 By far the most interesting addition is the “Challenge Mode“. This lets you play individual stages at your leisure, but allows you to keep any additional money to buy an assortment of bonus goodies, many of which affect the “Original Mode“. These unlockables include a variety of super-powered weapons like the Wild Beam and 14-Way Shot, the ability to continue from the stage where you died, an option to enable rapid fire, another to disable shop inflation, a Barrier like in Super Fantasy Zone and, most excitedly, four brand new stages: Dawndusk, Apochal, Cavian and Depooble. These all contain new enemies, new bosses, and new music, in a style consistent with the original arcade version. Unlocking these stages is mandatory if you want to get the good ending – if you play through the game normally you’re treated to a real bummer of a finale. 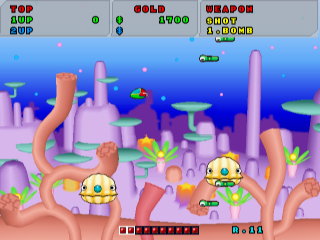 Fantasy Zone Complete Collection, released for the PlayStation 2 in 2008 includes perfect ports of the original arcade version and the SMS port. As an added bonus, it includes a game called Fantasy Zone Neo Classic It’s an enhanced version of the Famicom port, but with slightly different (and better) graphics, different music synth, and some altered enemy patterns. The arcade version is also featured as an unlockable on Sonic’s Ultimate Genesis Collection for the PS3 and X360. 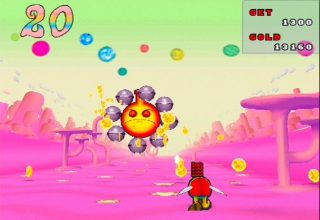 The 3DS version, called 3D Fantasy Zone: Opa-Opa Brothers, includes impressive 3D effects. There is a level select and coins can be carried over to subsequent games. The extra bosses from the SMS version have been added, and there is an arrow to indicate the vertical positioning of the bases. 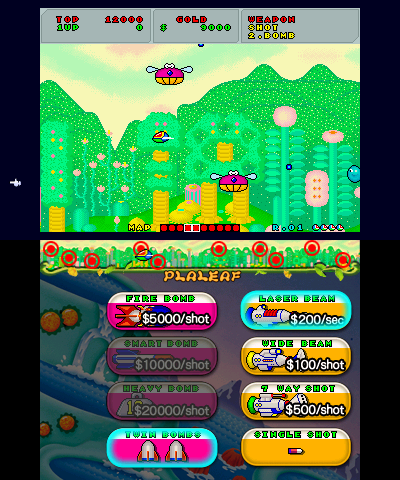 There is a new “Upa-Upa Mode” where you play as Opa-Opa’s brother. Here, you can switch between weapons with the touch screen, although each shot will deplete coins, and the final boss is their mother rather than their father, with a slightly different, more comical ending where she scolds him for wasting so much money. It also has a new music track for the first stage. Plus, the retail Sega 3D Classics Collection includes a hidden port of the SMS game, with added 3D, a radar, and a new FM OST (the original port only had PSG). 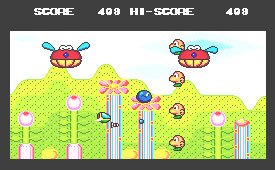 Fantasy Zone was also a hidden game in Arnold Palmer’s Tournament Golf for the Genesis. After hitting the ball 100 times on the first hole without landing on the green, input a secret code, and you’ll get to play a level of Fantasy Zone. The screen is cramped, and it’s only a single stage, but it’s a nifty diversion if you’re bored of golf.

For a long time, Opa-Opa was an official mascot for Sega. He showed up in the anime Zillion and ended up in the SMS game as a power-up item. He also makes an appearance in Alex Kidd: The Lost Stars as one of the treasured items you pursue, as well as a Mag (a flying robot helper) in Phantasy Star Online. The Fantasy Zone theme song, “Opa Opa“, is featured in the Dreamcast version of Sega’s maraca shaking rhythm game, Samba de Amigo, and as a cheer song in the soccer game Virtua Striker 4. He even makes a cameo appearance in Sonic Riders, and is a character in Sonic & Sega All Stars Racing. He is a downloadable character for the racing minigame in Sonic Adventure 2 and appears as a caddy in the Japanese PC game Sega Splash Golf. 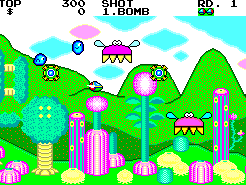 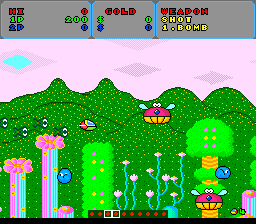 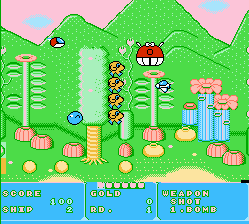 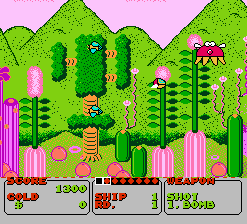 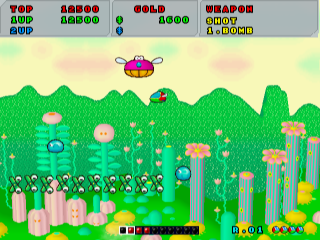 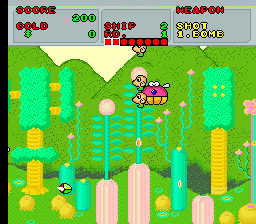 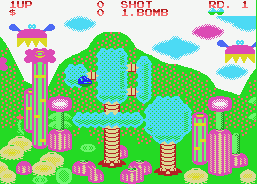