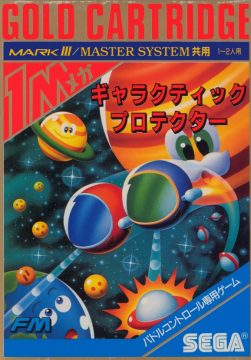 Galactic Protector is another spin-off that has little to do with Fantasy Zone, but features  Opa-Opa in the starring role. 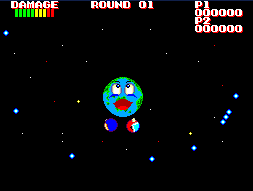 Your task is to spin around the planet in the middle of the screen, firing at the pieces of debris that come floating across the screen. It’s a tough job, but two players can play as once, with the second player taking on the role of Opa-Opa’s blue colored brother Upa-Upa. 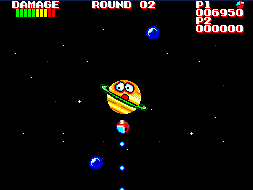 Your ships can only take one hit before being destroyed, but you need to make sure to protect the planet too. It can only take so many hits before blowing up, which instantly ends the game. The most amusing aspect is the range of facial expressions on the planets, which express emotions from “jolly“ to “angry“ to “extremely worried“. 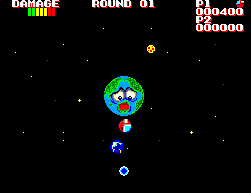 It’s a bit simplistic, and some additional weapons would’ve greatly added to the variety. It’s also pretty difficult, especially in single-player mode, so expect to see Earth blown up over and over again. It’s also very light on content. Even though there are 25 stages, there are only three different planet graphics. The shattered wreckage of Opa-Opa on the Game Over screen is also quite depressing, though the picture of him enjoying a tropical vacation at the victory finale almost negates this dark image. 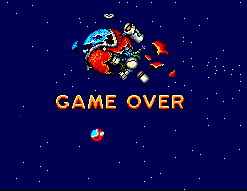 This game was only released in Japan and requires the use of the analog paddle controller. Some believe that this was meant to be released overseas under the name Cube Zone, given that the description on some Sega sales fliers seems to match the description of this game, but no other solid evidence has been found. Perhaps, like Woody Pop, it was planned but canceled when Sega decided not to release the paddle controller outside of Japan. 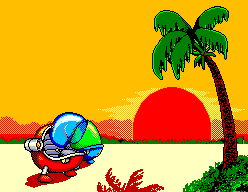 Other than hunting down the extremely rare paddle controller and buying a Mark III, the best way to play it is on the Fantasy Zone Complete Collection for the PS2. However, the analog control is still pretty fidgety and not quite the same thing.