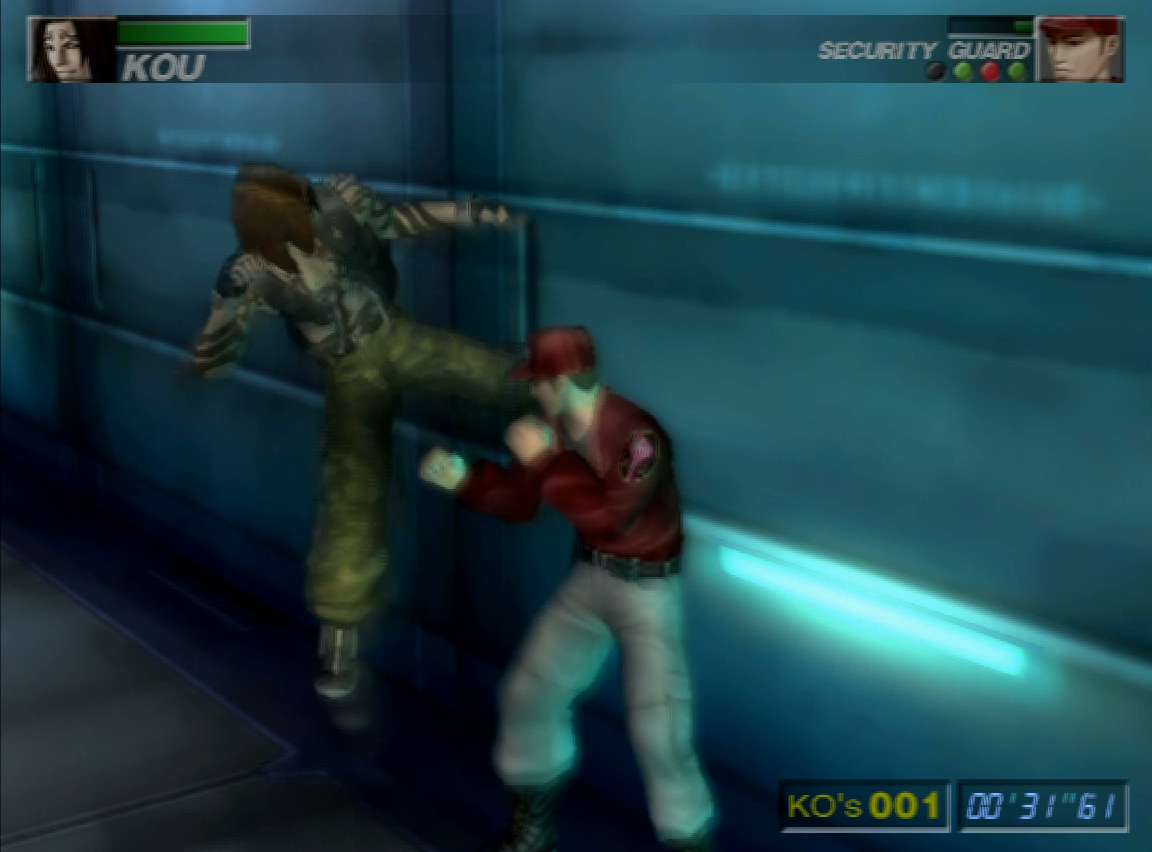 During the late 90s, Square was on top of the gaming world. With their unmatched RPG output, they quickly worked their way into the hearts of gamers with groundbreaking titles like Final Fantasy VII, so people were obviously eager to see what they would do with the next-gen Playstation 2. The Bouncer made a good showing at Tokyo Game Show in 1999, wowing people with its incredible visuals and promises of forward-thinking ideas like destructible environments and massive street brawls. But the illusion wasn’t to last; once the game was finally released in 2000 (2001 for North America and Europe), peoples’ hopes and dreams came crashing down as the game was met with mediocre reviews and broke its lofty promises. While The Bouncer isn’t a game most people care to remember, it’s still worthy of some recognition, if only as proof that even the greatest of titans can still fail.

The Bouncer was backed by some truly incredible talent, enough to make just about any development team jealous. The game was developed by Dream Factory, the studio responsible for oddball takes on fighting games such as Tobal No. 1 and Ehrgeiz, so they were a natural fit for The Bouncer’s curious blend of beat-em-up gameplay with light RPG elements and a cinematic presentation. The game was directed by Takashi Tokita (director of Chrono Trigger and Parasite Eve) and Seiichi Ishi, the lead designer on Virtua Fighter. The producer was Shinji Hashimoto and the character designs were done by the polarizing Tetsuya Nomura, both of whom would go on to create one of Square’s biggest franchises, Kingdom Hearts. 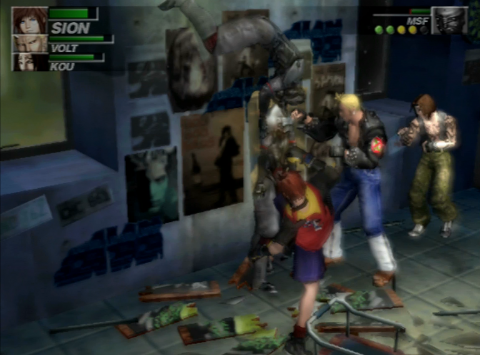 Square was known for its exceptional storytelling at the time, so one could have expected The Bouncer’s plot to be suitably strong, even though beat-em-ups aren’t known for their stories. However, it ends up being poorly paced with far more cutscenes than gameplay and having curiously similar problems to the ones that would affect Final Fantasy XIII nine years later. The story revolves around three bouncers who work for a club called “Fate” and their mission to rescue their friend, Dominique, from a megacorporation known as the Mikado Group. 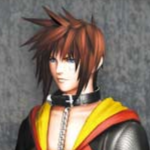 A young bouncer who keeps his distance from most people due to past trauma. Much like Snow from Final Fantasy XIII, he’s fixated on being the hero to the point where almost every line he has involves shouting Dominique’s name. He’s the most balanced fighter of the three and is the mostly directly involved with the story, making him a good first choice. 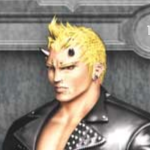 An imposing but quiet bouncer who was formerly a bodyguard for the Mikado Group’s previous CEO and has connections to Echidna, a member of the Mikado Group. He fits into the slow but powerful archetype, able to take hits better than the other two bouncers while dishing out strong punches and throws. 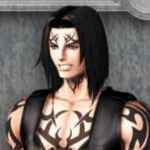 As the sassy loudmouth of the group, Kou serves as a contrast to the brashness and seriousness of his coworkers. He doesn’t have much of a connection to the events at hand, but his quick, kick-oriented fighting style is certainly effective. 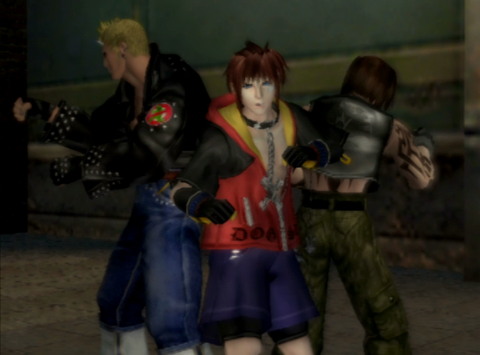 One of the key ideas of The Bouncer is the “Active Character Selection” system, which allows players to select one of the three bouncers to use for each battle and alters the game’s plot based on their choices. Each character has several exclusive cutscenes and the game is only movie length, so you’re encouraged to complete it at least three times to see everything. However, this means that the initial playthrough leaves the player with several unanswered questions and a story that feels rushed. Some characters will come and go without any real explanation and only one of the three protagonists gets a chance to shine, since trying to use the system as intended by swapping between characters will only make the story more disjointed. Just like Final Fantasy XIII, the story is needlessly told through multiple sources – each character’s past is explained to the player via loading screens throughout the game. The problem is that the load times for the game are pretty fast, so it’s entirely possible to miss out on valuable backstory with no way to reference it outside of replaying the entire game again.

Battles in The Bouncer take place in relatively large 3D arenas and typically pit the three heroes against several opponents. You have access to a decent number of moves, including kicks, punches, and grabs that hit at varying heights based on the button used. The Dualshock 2’s pressure sensitive buttons are also put to use here, allowing each button to be used for multiple moves based on how hard the button is pressed. You earn experience points for each KO (KOs by allies give you nothing!) to use on stat boosts and new skills in between fights, which sounds compelling in theory but is marred by the character selection system. Experience is only earned by the character you play as and there’s no way to grind for experience, so the best move is to stick to one character the entire time. There’s also nowhere near enough time to unlock all the skills in one run, so the system feels wasted on the game’s insistence on being a literal playable movie.

Despite the number of moves you have, you can often win by button mashing or repeatedly using a move that the enemy has a hard time guarding against. Bosses tend to be a spike in difficulty, but having AI companions makes things easier, since they can be used as decoys to guarantee hits against a distracted enemy. The Bouncer is an exceptionally repetitive game, with most fights being against the same generic security guards with the same battle theme playing over and over. The only attempts at variety tend to be more annoying than anything, such as a lengthy escort mission where you have to protect Dominique and a sequence as Sion where you have to aimlessly run around the Mikado Group headquarters until you find your destination. 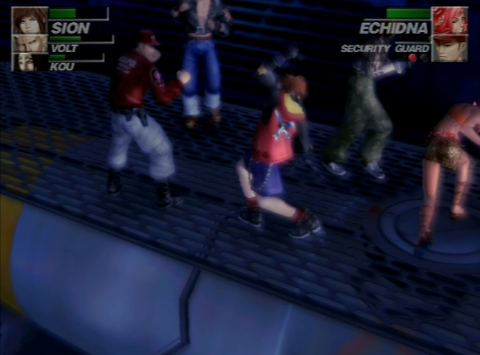 Once you’ve finished the story mode, there’s two other modes you can try if you still want more. Survival mode pits you against ten increasingly difficult waves of enemies with no opportunity to heal, and the Battle Royal mode allows up to four players to duke it out. Neither mode is particularly compelling, but being able to unlock characters from the story for use in the Battle Royal mode, each of whom have unique movesets, is an appreciated bonus.

Presentation is the factor that originally got The Bouncer noticed, and the final product certainly doesn’t disappoint. The game utilizes ambient and contextual lighting along with dynamic camerawork to really nail a cinematic look that feels fairly modern even today. Filters are utilized where appropriate, such as an eye-catching film grain that’s used during a flashback scene. The character designs, regardless of how you feel about Tetsuya Nomura’s style, are undeniably striking and each character feels impressively detailed and unique. These artistic choices, however, are dampened by some bizarre decisions elsewhere. Exaggerated ragdoll physics are incorporated for all characters during battle, so the game ends up looking ridiculous at times when a single punch can send someone flying into the stratosphere. The music for the game fails to stand out or invoke emotions from the player (aside from a very cheesy vocal theme used for the credits), so the fact that The Bouncer was the first game on the Playstation 2 to support surround sound almost feels like a waste. Environments are consistently bland, mostly taking place in a rundown city or a futuristic looking building. Aside from the collection of posters hung up on the walls of “Fate”, the environments lack detail and are comprised mostly of repetitive textures and limited colors, making them all blend together. The voice acting is mediocre as well, with most characters either sounding too subdued or shouting melodramatically with a lack of nuance or regard for the scene’s context. 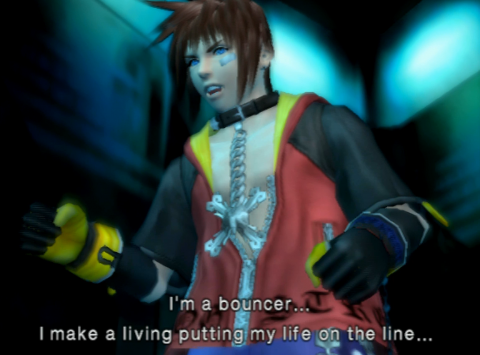 While The Bouncer will likely never return, Tetsuya Nomura still seems to have a soft spot for it. The design of Sion is remarkably similar to the one that he would use for Sora, the protagonist of Kingdom Hearts. Both characters have nearly identical spiky hair, similar facial features, and a shared fashion sense involving a hoodie mixed with various chains and large boots. Sion’s “Dog Street” branded clothing would also be used as inspiration for the character of Pence in Kingdom Hearts II, who wears a jersey with the very same branding. Though not at all related, Square Enix would go on to publish a surprisingly similar game called The Quiet Man in 2018 that also attempted to merge cinematic storytelling with beat-em-up gameplay. The Quiet Man was received even more poorly than The Bouncer and is considered a laughingstock among gamers who know of it, so it leaves one to wonder if cinematic, story driven beat-em-ups just aren’t meant to be.