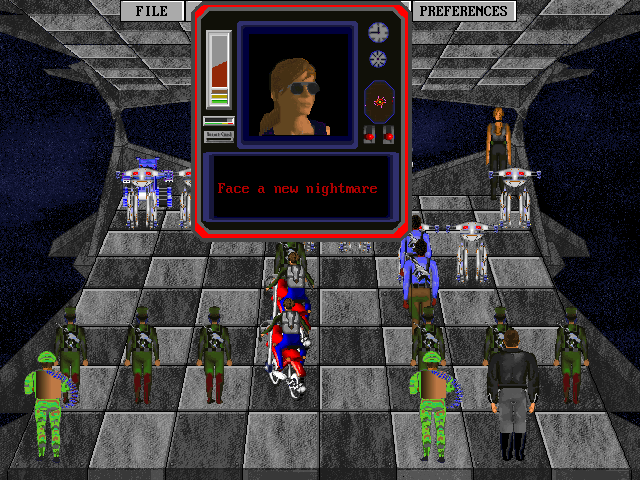 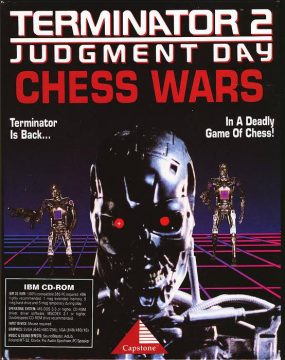 When Battle Chess first saw release in 1988, it served as a rather serviceable chess game, with the gimmick that the pieces on the board were actual characters, such as the king and queen being, well, an actual king and queen. This also meant that when one piece captured another, a short, unique animation would play out where the captured piece would be dispatched in some goofy manner. It made a pretty serviceable chess game, but much like any game where the effort clearly went into watching goofy animations, they’d eventually get boring to watch, sooner or later. Despite this, though, the “genre” dragged on for a surprisingly long time. There were two sequels to Battle Chess, and other companies followed the formula. One of the more well known successors would have to be Star Wars Chess, which was basically Battle Chess with Star Wars heroes and villains.

So enters Capstone Software, publisher of a myriad of terrible licensed games for home computers. Among other games like Homey D. Clown and Operation Body Count, they brought this effort to the table. Out of the many, many games released for the Terminator 2 license, this is probably the oddest of them all. After all, even Star Wars has the slightest connection to chess, since there was that one holochess game they played in the original trilogy. With Terminator, however? The only leap of logic leading to a chess game there is a quick and easy cash-in. 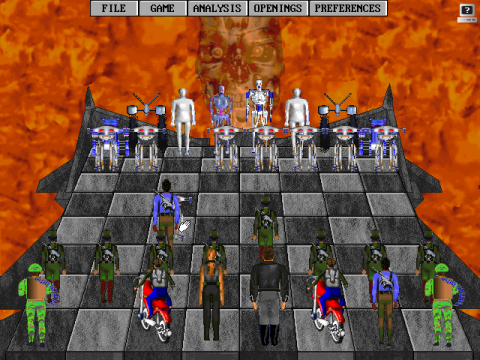 In this particular rendition, the human resistance goes on the board along with Skynet’s forces. The humans get the T-800 and Sara Conner as king in queen, along with a bunch of generic humans and, strangely, two John Connors. Skynet, on the other hand, gets a bunch of different Terminator models, including two of the lumpiest T-1000s you’ve ever seen, and other robots like Hunter Killers. Unfortunately, a lot of the pieces can look so similar at times that it becomes very easy to forget which sprite belongs to each piece, which is especially common when you’re looking at Skynet’s pieces. Although, it’s not any better on the human’s side, since somebody decided that John Connor should be the bishop.

As far as chess games go, it’s serviceable. There’s nothing obviously broken about it, although it’s definitely not going to be as complicated, as say, any of the Chessmaster games of the era. About the biggest issue with playing the game itself is that the wait for the computer to make its move can end up becoming incredibly annoying for a while, although that’s hardly an issue in this particular game. Given the perspective of the board, as well as how big the piece sprites are, it’s also a pretty common occurrence that some of your pieces will block the view of some of the moves you can make. This happened in Battle Chess, to be fair, but at least that game had a 2D board you could look at for a better view.

The underlying chess engine is pretty average over all, neither particularly broken or that exciting, even for the sorts who get really into the sort of features chess games offer. That just leaves the game to be judged on its animations, and sadly, this game proves to be a massive disappointment on that end. Games like Star Wars chess offered an entirely unique animation for each combination of captures, so you got to see things like C-3PO accidentally kill Darth Vader. Here, though, every piece does the same animation on every piece, so if Sara Conner shoots a Hunter-Killer and makes it blow up, it’ll be the same exact animation she uses on the T-1000. In fact, there’s honestly an incredibly low number of animations that aren’t some variation on “X shoots Y, Y falls over/explodes”, no matter which side makes the capture. The biggest exception would be the T-1000 turning into a tornado and making the humans explode so hard their blood hits the screen, which is about as much fun as the game ever has.

It’s also not an especially pretty game, with gratitious amounts of early 90’s CGI all over the place. When you get into the capture scenes, the humans tend to be incredibly grainy and indistinct, while Skynet’s forces tend to create explosions that look like they came straight off a clip art CD. There’s at least a decent variety of different board types, some of which actually look kind of cool, but there’s only two music tracks that play throughout the game, both of which tend to get annoying very quickly.

It’s such a wasted opportunity, though, because games like these only have a replay value as long as the number of unique animations there are. There’s just absolutely no fun had with the entire concept. The concept of Terminatorchess is dumb enough as it is, why not go all the way? Why not make John Connor use his Atari Portfolio to hack the enemy T-800s into doing a disco dance, or literally anything? To be fair, Terminator’s not the cheeriest of franchises, but when you make your action movie franchise into a chess game, you lose the right to take things so seriously. About the only comedy to be found is unintentional, like the way T-800 exoskeletons will taunt you in the wimpiest voice a killer cyborg could possibly have.

Overall, Chess Wars is pretty much a disappointment all around, and the most interesting thing about it is what drove somebody to think that Terminator and chess would somehow go well together. If you want a chess game, there’s so many better games from the same period, both in terms of actually playing the game, or the goofy animations. If you want to watch humans kill robots, or possibly vice versa, in outlandish and silly ways, you’re going to leave disappointed on that front, too.