Sega’s Power Drift is a go-kart racing game, and one of many arcade titles to use Sega’s Super Scaler technology to emulate 3D effects through the use of 2D sprites. Like many of these games, it was directed by Yu Suzuki, and it’s powered by the Sega Y Board, which also ran G-Loc, Galaxy Force and Rail Chase. What sets Power Drift apart from the pack is the way it uses those sprites. OutRun – and most other arcade racing games – used flat shaded colors to simulate scrolling on the road. Power Drift, on the other hand, comprises all of its track layouts with flat bitmaps, which makes it look like you’re driving over a series of Lincoln Logs. 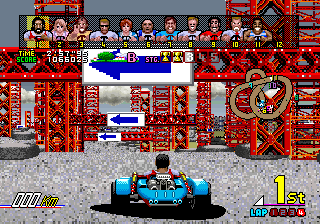 While initially this seems a bit silly, this design decision allowed for greater freedom when designing the tracks – they each feel like mini roller coasters, with sharp inclines, dives, curves, and occasionally even jumps. There aren’t any guard rails on the courses either, making it extremely easy to fall off the ledges and crash into the ground. And compared to most other similar games, which only stuck the camera right behind you, Power Drift introduces each course with a fly-by, spins around wildly whenever you go out of control, and even offers a rear view camera when you hit the Start button. The whole screen also tilts left and right as you steer, which adds to vaguely dizzying experience. Like most games of this type, it’s fascinating to see how Sega tried to emulate a wholly 3D space using strictly 2D technology. Like many of Sega’s other games, certain cabinets were sit down models with hydraulics that tilt the player left and right up to 20 degrees.

There are twenty five tracks in total, divided into five sets of five. Each track is quite short and requires four laps to complete. If you manage to place high enough in the given set of tracks, you get to play a bonus track, where your car rather trippily morphs into either the motorcycle from Hang-On or the jet from After Burner. There are some neat touches though, like the billboards that are actually advertisements for some real life business, including Coca-Cola, the Chicago radio station WLAK 94, the Australian real estate company Max Christmas, and the Los Angeles-based Victory Furniture. The music is upbeat and catchy, with one song for each of the five courses, and many of them are a few minutes long. Most tracks are excellent, but unfortunately they tend to get drowned out by all of the tire squealing and other sound effects. 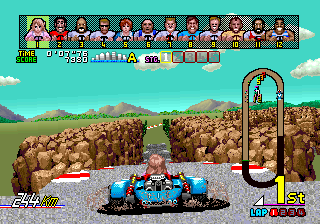 While impressive to a certain degree, Power Drift isn’t quite a classic, and really hasn’t aged quite as well as other Yu Suzuki titles, especially OutRun. The speed is a bit too fast, the controls are a bit too touchy, and the action is a bit too chaotic, especially with all of the disjointed terrain sprites flying around. Plus, each race is comprised of a dozen drivers, each categorized with a unique, super deformed face (with artistry based off American comics, according to the Japanese flyer) at the top of the screen, which makes the races feel remarkably crowded. It’s far too easy to spin out of control and roll off the track, which admittedly looks cool, but of course also ensures you won’t place highly enough to win. There’s also technically no “drifting” in the game, at least in how it’s been defined in modern racing games.

There was a networked release of Power Drift which allowed up to eight cabinets to be linked together. Known as Power Drift: Tsuushin Taisen (“Network Versus Battle”), it also includes a handful of changes. In the regular game you need to place in the top three ranking to continue. The requirements change in this version, depending on which level you’re on – the first stage is considered “practice” so you’re guaranteed to go to the second level, but the second requires that you place in the top 6, and then the requirements become more stringent. The courses are a bit different, but the bonus courses are gone. This is also the only version that lets you pick automatic or manual transmissions. Distribution was scarce, since it was released long after the original arcade release, and as it’s unemulated, it’s not yet playable in any form. 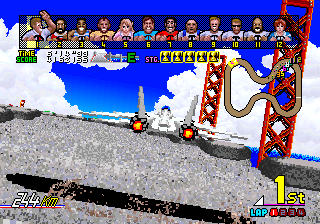 Although Power Drift is largely unknown in America, it has a fairly decent reputation in Europe due to the quality of the home computer ports. None of them are particularly faithful to the arcade version, in that most of the fancy graphical tricks from the arcade version are totally missing. The roads are simply gray or colorless (though they do slope up and down), the screen doesn’t tilt, the rear-view option is gone and most of the details on the side of the road are missing. The most well regarded version is the Commodore 64 release, which runs quite fast and even keeps most of the roadside decorations, including the tunnels. It also has some excellent music, though only one song is used during gameplay. The Amstrad, MSX and ZX Spectrum versions are essentially identical outside of their color schemes, though they’re all much slower and more visually sparse. These versions do, however, let you pick your driver. The IBM PC version is displayed in VGA so it’s the most colorful, and it runs very smoothly, but the amount of detail on the courses is even less than the Amstrad version, making the courses appear incredibly barren, plus the coloring of the road makes it look like static. 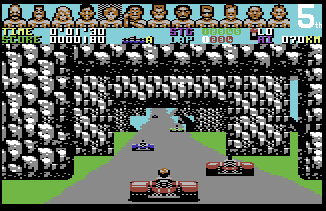 The Amiga and Atari ST versions look to be the closet to the arcade version, as it tries to replicate the scaled sprite look of the arcade. While it’s not nearly as smooth – like many arcade-to-Genesis ports, it seems to use sprites of different sizes, rather than actually scaling them – this allows for mostly accurate courses, and even has the camera panning/rotating intro. However, the gaps between the road blocks are more evident, which makes things confusing, plus it’s incredibly choppy and rather glitchy. Compared to the Commodore 64 version, the music is terrible too. It’s ambitious, but not fantastic.

Curiously, while most of the other Super Scaler games got ported to various Sega platforms, the company largely neglected Power Drift. Dempa was going to port the game to the Mega Drive, which was eventually changed to the Mega CD, but the project was ultimately canceled. The only released console port around the time of release was for the PC Engine, ported by Copya System and published by Asmik Ace. The PC Engine could also not scale sprites, so it uses an effect similar to the Amiga version. However, in general it’s smoother and much more playable. This comes at the expense of plenty of flicker, plus there are only six racers at once, rather than twelve. You can also choose your character (the only version that shows their names in game) as well the color of your buggy. It’s also missing quite a bit of content, with only a single set of courses with nine levels, with the tenth being the hidden After Burner jet stage.

The two best ports were released for the Saturn and Dreamcast. The Saturn version, like many of the other Sega Ages arcade conversions, was ported by Phant and published in 1996. It’s an excellent port and includes a Grand Prix mode, as well as the option for arranged or arcade music. The only downfall is that the game only runs at 30 frames per second rather than 60. The Dreamcast version was included as a compilation disc featured in the Yu Suzuki Game Works Vol. 1 book, released in 2001. Other games on the disc include After Burner II, Super Hang-On, OutRun and Space Harrier. It’s a straight port of the arcade version, so it lacks the extra tournament mode and arranged music. Its visuals are also upscaled and filtered, but it does run at a smooth 60 FPS. 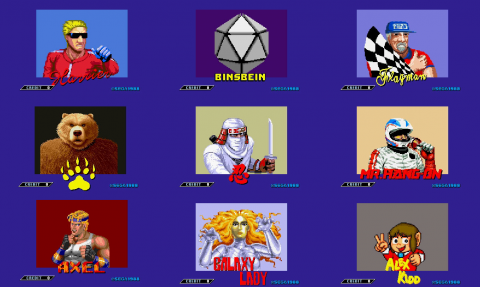 The 3DS version includes the widescreen and 3D visuals. It’s only on the Sega 3D Classics Collection retail pack in America and Europe, though the eShop version, released only in Japan, includes a bonus mode with music and riders from other Sega games, including Space Harrier, Fantasy Zone, Streets of Rage, Altered Beast, Alex Kidd and others. 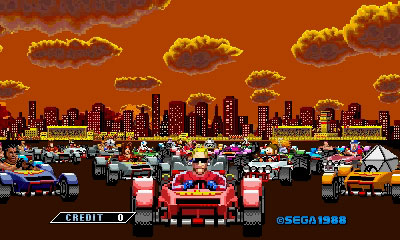 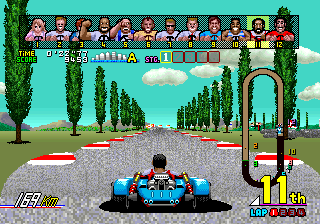 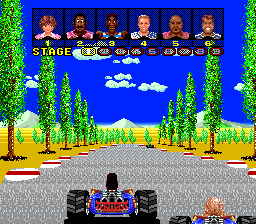 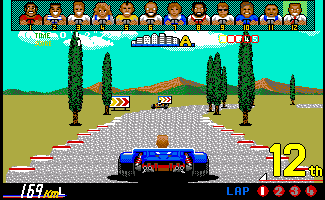 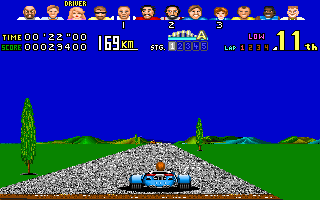