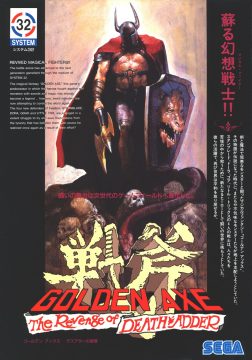 Golden Axe: The Revenge of Death Adder is undoubtedly the pinnacle of the series. Released in 1992 in the arcades for Sega’s System 32 hardware, it improves on the original in every way, but apparently was so good they didn’t even try to port it, which is truly disappointing. 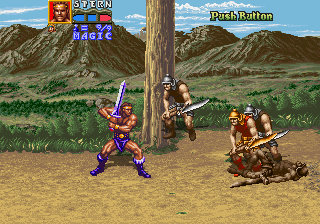 The story is typical: Death Adder has been revived, and he’s again trying to enslave the world. However, there are four completely new playable characters this time, allowing up to four people to play together simultaneously, depending on the type of cabinet.

Stern Blade is essentially an Ax Battler clone, who has fire magic that incinerates foes. Little Trix is an imp with a trident. He uses some sort of plant magic that makes trees grow. This is awesome because it causes apples to fall to the ground that refill your life if you collect them. 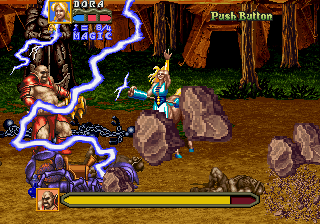 Dora is a female centaur who uses earth magic, and has the lowest magic cost in the game. Her attacks are faster than everyone else’s too, except for Trix, while doing almost as much damage as Stern Blade. She’s probably the best character to use if you’re playing through the game by yourself. Finally, Dora  somehow grows human legs for the purpose of riding beasts and pulling switches.

Goah is a giant who is ridden by Gilius Thunderhead. Gilius wields the magic of death and entropy. Together they form the most powerful character, both in strength and magic, which more than makes up for their low speed. 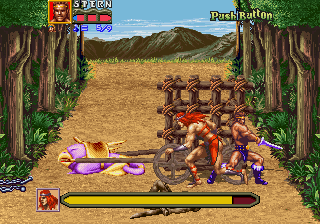 You can now switch characters when you continue, which is a very welcome addition. There are tons of new enemies too, which include tribal men, giant squids, Grim Reaper type enemies, death knights, and ogres. The graphics and artwork are fantastic, and completely blow any other arcade competitors out of the water. The characters are huge, and everything is much more detailed, due to the System 32 hardware. There are gorgeous waterfalls, giant mushroom forests, even some scaling effects in certain segments of the game.

There are plenty of cool animations for characters being slain, staggered, and knocked away, which gives the game a lot of personality. The best is how when fighting tree men, a well-timed heavy strike will cause them to immediately shatter, their splinters flying into the screen. 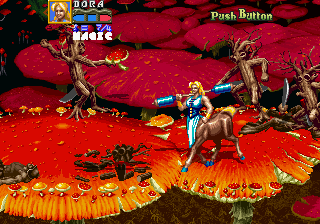 There are quite a few changes since the previous games. First of all there are branching paths, which increases the replay value. There’s also a diverse variety of rideable creatures which all control a little bit differently. The two highlights are a giant mantis that snaps an enemy’s neck as a finisher, and an undead dragon that’s stunningly animated.  There’s another giant mantis that breaths fire, and a scorpion that creates an arc of electricity with its claws.

One cool factor is that you can use mini catapults and ballistae, which can be mounted on your rideable creatures and fired while moving. You can also destroy projectiles when they are fired at you. Magic works differently in this game, as instead of having different levels, you have just one awesome spell that uses a pre-set number of potions. However, you can collect many more potions than this cap. When certain character use their magic, it cuts to an extremely ruthless close-up of the faces of your enemies being incinerated or turned to stone. 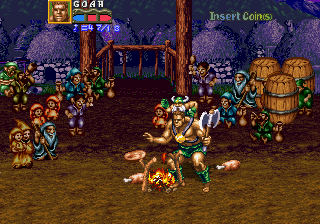 The basic fighting mechanics are the same with a few original additions, such as a new kick attack which stuns characters. The awesome running jump followed by a downwards stab attack returns, except this time it can be done even while riding a beast. There are also crates to smash that reveal power-ups, and switches that can be used to free captured slaves.

The hit detection has also improved a great deal. Enemies seem to deal a lot more damage though, and can stun you with almost every hit. This can be frustrating, but thankfully the game lets you continue as many times as you want, as long as you keep pumping in the credits. 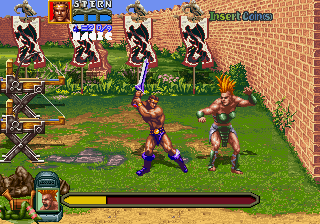 The music is composed by Masanori Takeuchi and Tomoyuki Kawamura and is yet again inspired by the Conan movies. Still, despite the higher sound quality, the overall soundtrack lacks the punch of the original.

The game’s only flaw is that it’s just too damn long. There are only a handful of bosses that you fight over and over again, and while their palette changes each time, they’re not even all that different from each other. They all utilize the same pattern, though each has a unique move to differentiate it from the others. There’s one boss type that’s especially interesting, an armored scarecrow with a scythe, but even his act gets old after a while. 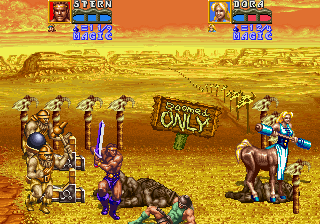 Regardless, this is still one of the best arcade beat-em-ups made, and certainly shows Sega at the top of their game. It’s extremely unfortunate that Golden Axe: The Revenge of Death Adder has never been ported outside of arcades and thus largely forgotten.

There are some minor regional changes. The Japanese version is shorter, since you skip over the path not taken when they branch, but you need to play all levels in the English version. There are also some balance changes in regards to lives and energy. 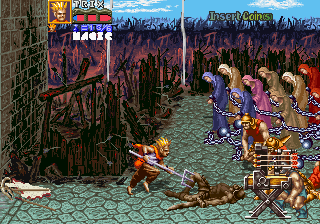