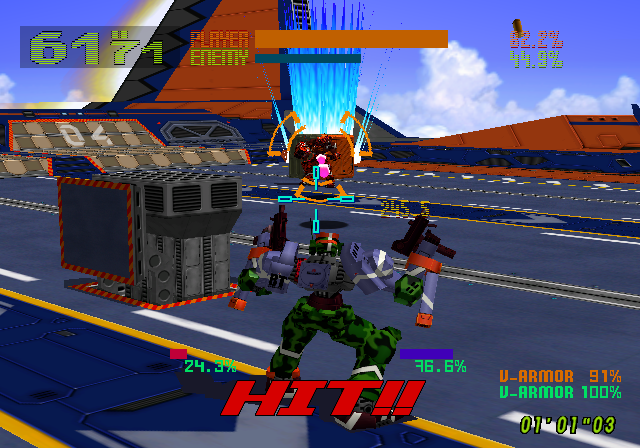 The series received its second sequel three years after the first installment, which again originated in the arcades. Virtual On: Oratorio Tangram (affectionately dubbed “VOOT” by fans) doesn’t change many game elements, but it does add more Virtuaroids, bringing the total roster of VR’s to twelve (thirteen with the unlockable Ajim). Several of the old mechas return, and some of the new ones are simply redesigns of VRs found in the first game.

In addition to the standard twin controls, Oratorio Tangram incorporates a turbo feature for your VR’s weapons that allows you to make stronger attacks. The downside to these is that your VR has to be standing still, limiting your evasive capabilities. Other new gameplay additions include air dashes, “watari dashes”, turbo weapons, a new defense system called “V. Armor” and completely redesigned close combat. The “watari dashes” (called “vertical dashes” in the American instruction booklet) allow your VR, with proper timing, to change directions in the middle of a dash, allowing counterattacks or wider ranges of fire. The V. Armor system was implemented to allow heavier VR’s to have a chance against faster, more mobile VR’s. It functions like a guard meter that repels shots at long range the farther away they are (somewhat like Street Fighter Alpha 3‘s projectile system). It starts at 100%, and over the course of the fight, decreases, making the mech more vulnerable. 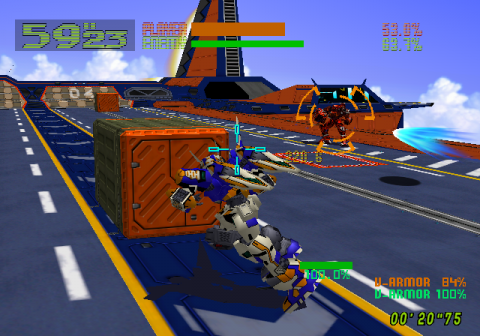 The graphics are excellent. Oratorio Tangram still looks great after all these years, thanks to the powerful Model 3 hardware, making it a contender for the likes of Shenmue and Virtua Fighter 3. The models are less jaggy, the colors more vibrant, and the lighting effects are fantastic. The stages are fairly simple, but it only contributes to the simplistic charm. Many Dreamcast games have a pretty rabid following among many gamers, and with titles like Oratorio Tangram, it’s not hard to see why. Obviously a commendable improvement over the original, it has an addictive catch in its gameplay that is undeniable. It’s even more varied than before, having everything from an airport level to a brightly lit futuristic stage (that does an excellent job at showing off the engine’s lighting capabilities). The VR’s color schemes are also just as entrancing and depict the same aura of personality when you first saw them in the original game. It really makes you ponder how much work Sega put into the game during development, and it shows. Naturally, the soundtrack is spectacular. It’s typical Virtual On fare, and there are over 70 tracks total in the game, with about 30 each for the stages you play under the opposing companies (RNA and DNA).

The CPU is extremely challenging, too. On later levels, it really works to make you sweat (or swear) as enemy VRs duck in and out, shooting at just the moment you’ve leapt into the air to regain lock-on, using cover to defend against your beam weaponry and having the reflexes of a god when you engage them in close range combat. 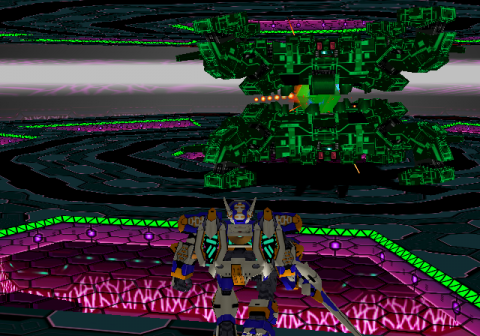 Naturally, a port of this package-of-awesomeness was to be expected. The Dreamcast ports for Japan and America were released in 1999 and 2000, with the Western versions published by Activision rather than Sega. These home versions had the standard modes such as survival, replay mode (for saving your favorite fights), training (absolutely needed to get a grip on the game’s mechanics) and the usual single-player and two-player modes. The solo mode takes you through the warring of two giant corporations named DNA and RNA as they wage war with its army of VR’s against the wonked out security systems of a lunar moon base. You take the role of a pilot in an attempt to stop it. It’s not particularly engaging, but keeps your attention enough to get past the idea it was simply implemented to justify your bot battles. It’s serviceable, though, and fun for testing your mettle against the god-like reflexes of the computer, but the real draw is the awesome two player mode. You can either set your screens to be vertical or horizontal, although vertical seems to have an advantage in allowing the camera to follow you better in aerial combat. As fun as facing off against the computer is, it’s never the same as an unpredictable human opponent on your skill level. Virtual On was practically made for human on human combat, and the player’s countering against each other’s attacks, movements and using the strengths of different VR’s feels just like the classic Street Fighter II tournaments held in arcades so long ago – fun, competitive, and left you yearning to have a rematch.

Despite its great gameplay and generally good reviews, Oratorio Tangram didn’t gain an especially wide following in the States. The Dreamcast port never quite gained status like other DC titles such as Soul Calibur or Virtua Fighter. If there are any glaring faults in VOOT, though, it was the control scheme. The standard Dreamcast controller setup only allowed you a few preset commands to use with, and unlike the arcade joysticks, none of them are particularly satisfying. Oratorio Tangram was a game that you needed to be comfortable with the controls, and most players weren’t willing to shell out the mucho dinero needed for the dual arcade sticks, which were even harder to come by than the Saturn version. Online play was also totally removed from the American version.

There are a handful of unlockables and treats in the game, such as the unlockable Ajim, who would challenge you if you won against the CPU with too many timeouts. He’s incredibly powerful, having cube lasers that will obliterate your VR in seconds. He’s usable after his defeat by changing the Dreamcast’s internal clock to the date of Halloween (part of a promotional secret implemented by Activision – the Japanese version is somewhat different.) Other things were slight customization options that allowed you to change your VR’s in a variety of colors. It’s not as in depth as Armored Core, but it was something. Finally, you can access different versions of Oratorio Tangram released. 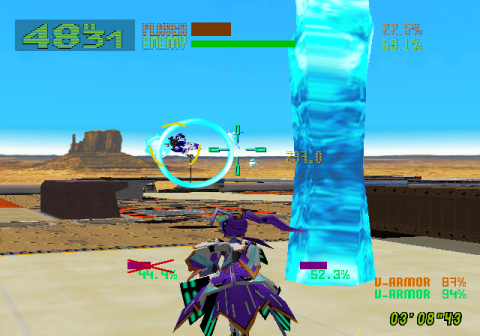 The Dreamcast version is considered version 5.45, which was slightly revised from the initial release and changes the gameplay balance. After completing the game with every mech, you unlock version 5.2, the first arcade version, which features an alternate version of the public port stage that looks pretty cool. The game speed is a bit more sluggish in version 5.2, and VR’s like the Apharmd.S are weaksauce, while the Raiden is vastly overpowered. There was also a third version, version 5.44, which is the upgrade to ver.5.2, but isn’t available on the Dreamcast port. Finally, there’s a version 5.66 (dubbed Virtual On: Oratorio Tangram: 2000 Edition), which includes three new VR’s (mostly just new variations on the Arpharmd, Grys-Vox and Temjin), four new stages, and improved character balance. These bonuses were found in a rare bonus disc for the Dreamcast released only in Japan.

In 2009, Sega released Oratorio Tangram for the Xbox 360 as a digital download on the Xbox Live Arcade. In addition to the gorgeous high-res graphics and widescreen display, it’s the 5.66 Edition, the first time this one was officially released outside of Japan. There’s an option that allows for a more traditional control scheme, allowing mech movement with the left stick and camera movement with the right stick, which makes playing a bit easier for newbies. The original controls are still present, but the 360 sticks just aren’t sensitive enough to pull off some of the more advanced manuevers. Hori released special twin sticks in Japan that retail for over $300.

For those wondering about the strange title: an “oratorio” is a musical piece featuring choir voices which usually tells a religious story, and a “tangram” is a type of Chinese puzzle, which also happens to be the name of the last boss. Altogether, that makes Virtual On: Oratorio Tangram one of the most nonsensical titles in all of video gaming.