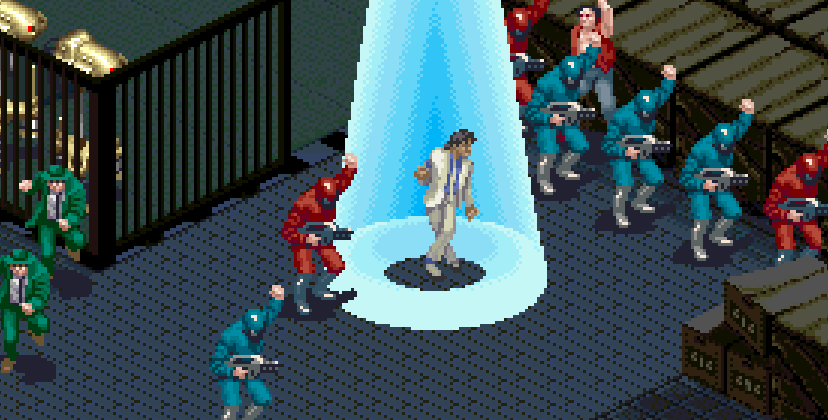 The arcade version of Michael Jackson’s Moonwalker was developed in tandem with the Genesis version, but not only was it by a completely different team, but it’s also an entirely different game. Rather than a side-scrolling platformer, it’s a weird, isometric, run-and-gun/beat-em-up hybrid, capitalizing on the style of game that was popular in arcades at the time. It was developed for the System 18 board.

The premise is identical, and most of the level themes are, too, though some of them are in a different order – the game starts off in the cavern, for example, and the nightclub is only one part of a greater “Arcade Quarter” stage. Progress through the levels is linear though, with the screen automatically scrolling until it reaches certain stopping points, requiring you to kill all of the enemies to advance. There are also more boss battles, usually Mr. Big riding in some kind of robotic contraption. There’s no equivalent for the final level taking place in outer space, though.

Michael no longer attacks with sparkles, but instead zaps enemies with an electrical force, which can be charged by holding down the fire button. You can still lure foes into dance numbers, although these don’t drain your lifebar anymore, and instead their stock can be replenished by rescuing kids. When you find Bubbles the Chimp, you’ll turn into a robot and can temporarily zap enemies with missiles and lasers. This version also features three-player simultaneous play, with each player represented by Michael in differently colored suits (red and white for player two, and black and red for player three). 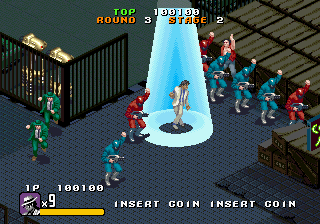 Much of the soundtrack is the same as the Genesis version, and the quality of the instrumentation is approximately the same. The only major difference is that the “dance” music is a short, digitized sample rather than a chiptune rendition.

There’s lots of unintentional hilarity here, too. Comic book panels display at the beginning of each stage, along with a map of the area with all of the hostages. These scenes show a portrait of Michael doing his trademark “WOOO!”, apparently to intimidate Mr. Big, as if he was some kind of dog howling against his enemy. The robot transformation is abnormally creepy, with Michael growing into a huge, pixelated monstrosity, morphing into metal, then shrinking down to standard size. When you reach the boss battle in the Graveyard, Mr. Big taunts with a voiced speech sample proclaiming “I love you Michael…to DEATH!” One of the later enemies is a mech with a gigantic phallus between its legs – it attacks by thrusting, which it does repeatedly when you use your dance moves. Also, due to some unfortunate color choices, it appears that certain enemies are wearing jackets but absolutely no pants.

The arcade Moonwalker is undoubtedly the best looking version of the game, with some pretty crisp visuals. It’s definitely worth playing, though due to the nature of being a quarter-muncher, it’s really not quite as good as the Genesis game.