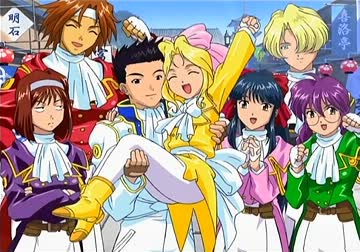 The first Sakura Taisen anime was Ōka Kenran (桜華絢爛), “Cherry Blossom Magnificence”, released between December 1997 and July 1998. It’s a four-episode OVA; episodes 1-3 tell of the Flower Troupe before the events of the first Sakura Taisen, including how Sakura and Sumire joined the Kagekidan. Episode 4 is a side-story that takes place during Sakura Taisen.

Next was Gōka Kenran (轟華絢爛), “Rumbling Flower Magnificence”, released between December 1999 and December 2000. It’s another OVA, which takes place after Sakura Taisen 2 and consists of six self-contained episodes of Ohgami reminiscing on his experiences in Tokyo with the Kagekidan. Each memory is triggered by some memento he comes across as he packs his things to leave for Paris (in anticipation of ST3).

A 25-episode anime series ran on broadcast TV from April to September 2000. It was based on the story of the first game, but included some unique new scenes and shied away from the heroine-specific relationship subplots that are so often problematic in anime adaptations of games that let the player choose a romance path.

The original two OVA series and the TV series in particular are interesting because they became popular among non-Japanese fans thanks to ADV Films picking them up for localization. So it’s not uncommon to find Sakura Taisen fans who have never played the video games themselves, or even who never knew that there were video games! The fantastic late-90s animation, voices, music, and storytelling made the Sakura Taisen animes eminently enjoyable whether you had played the games or not. 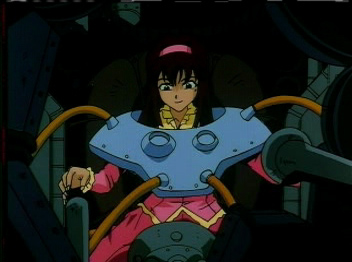 Sakura Taisen Katsudō Shashin (活動写真), “Moving Picture”, is a high-budget theatrical anime production that came out in December 2001. It takes place between Sakura Taisen 3 and 4, and introduces the character of Ratchet Altair, the leader of the New York Kagekidan who would return in STV. The plot is a somewhat bizarre story of a sinister American corporation that is trying to replace the Kagekidan with its own self-piloting robots for profit.

Su-Mi-Re is a one-off OAV episode that commemorates the retirement of Sumire’s voice actress, Michie Tomizawa. It was released in December 2002. The story takes place after ST4, and involves Sumire discovering that because her spiritual powers are declining, she needs to retire from the Kagekidan.

Sakura Taisen: École de Paris and Sakura Taisen: Le Nouveau Paris are each 3-episode OVAs, released between March 2003 and March 2005. They tell side stories about the relationships between characters during Sakura Taisen 3, such as how Glycine and Erica met, or how Lobelia was convinced to join the Paris Kagekidan, or how Hanabi has to hide her participation in the Kagekidan from her father.

Sakura Taisen: New York New York is a 6-episode OVA, released between April and August 2007, that takes place after the events of Sakura Taisen V. It tells side stories about the characters of the New York Kagekidan that were originally intended to be included in the game proper as adventure chapters.

The Sakura Taisen manga has been going since February 2003, with story written by Ōji Hiroi himself and art by Ikku Masa (who does a fine job with his inheritance from Fujishima and Matsubara). The plot is based mainly on the storyline of the original game, but with a melange of elements from other Sakura Taisen properties added in: Kayama from Sakura Taisen 2, characters from the stage shows, mechanical designs from Atsuki Chishio Ni, and so on. Nine volumes came out in the original series, released on Koudansha’s Magazine ZKC label. A second series that continues the story, with three volumes so far, is being released on the KC Deluxe label. Over the years, the comic has run in the manga publication that mutated from Monthy Shōnen Magazine Z, to Magazine Îno, to Monthly Shōnen Magazine+.

Probably the most bizarre development in the Sakura Taisen franchise is the girls’ comic Sakura Taisen Kanadegumi (サクラ大戦奏組), which started in 2011. A collaboration with the long-running popular girls’ manga magazine Hana to Yume, it reverses the classic Sakura Taisen trope by putting a female protagonist in a troupe full of charming and attractive men. The story is that the heroine Neko Miyabi came to Tokyo in order to join the Hanagumi as a performer, but ended up assigned to the Kanadegumi, the orchestra group. Of course, it turns out that the orchestra is also a secret combat troupe for battling demons. The limited edition of the first volume of the manga came with a short anime DVD. Starting November 2012, Kanadegumi stage performances are being held much in the same vein as the traditional Sakura Taisen live shows. 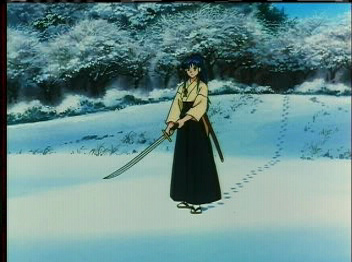 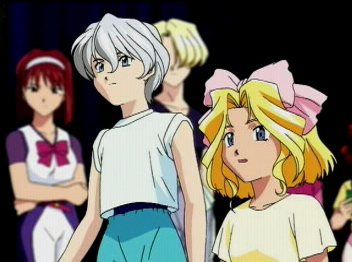 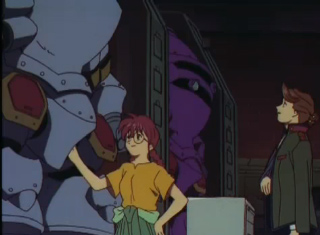 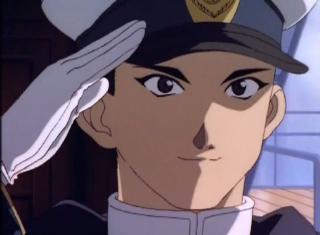 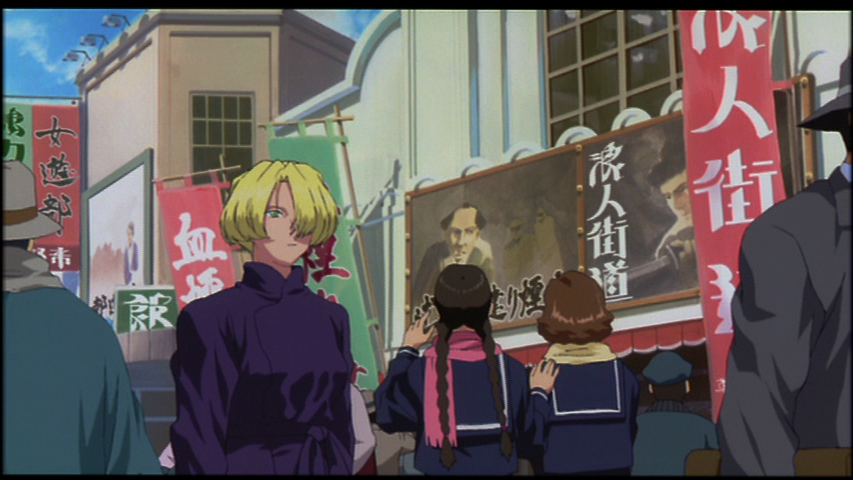 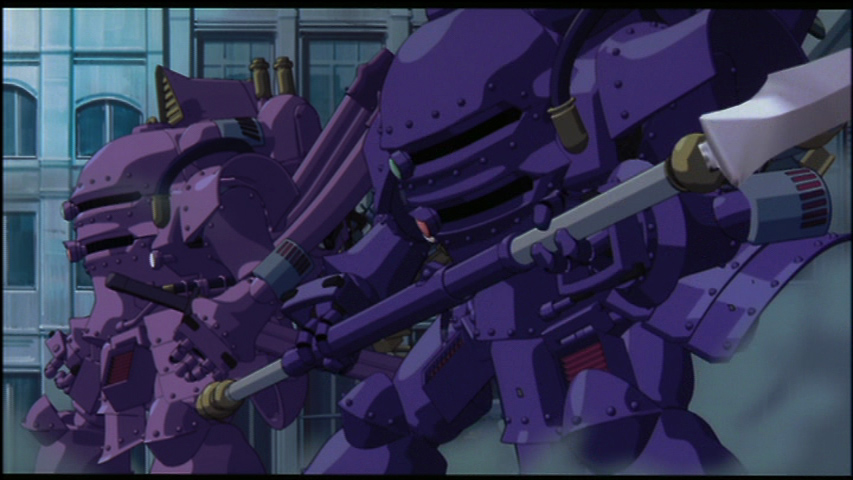 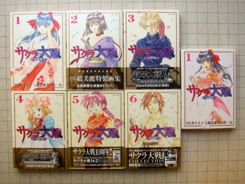 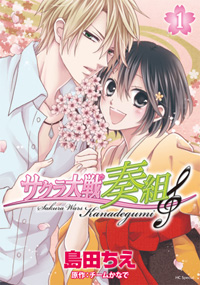 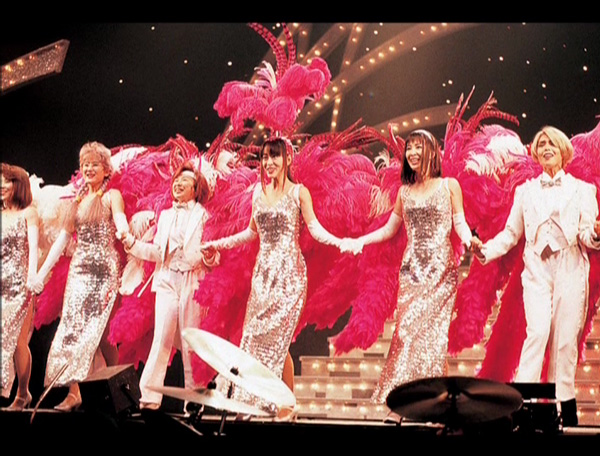 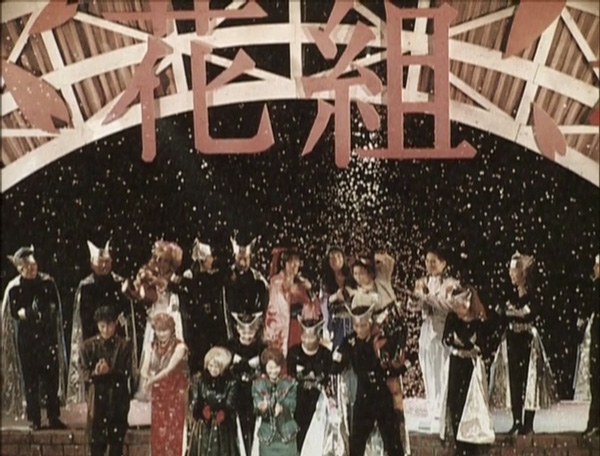 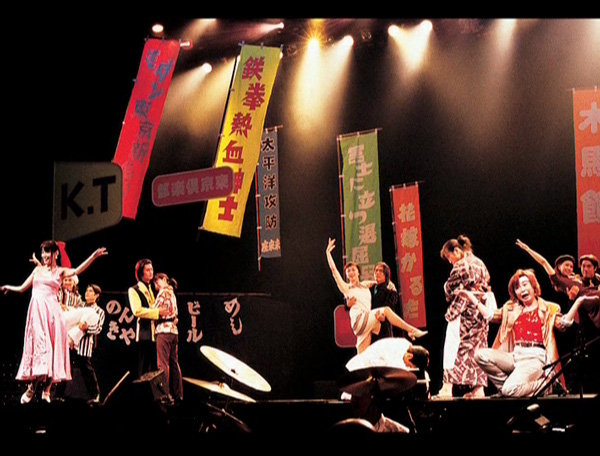 The semi-annual Sakura Taisen stage shows grew to be as big of a part of the franchise as the games, anime, and manga. If there was any doubt about how seriously the fandom took their idolization of the actresses, consider the hubbub surrounding the retirement of Michie Tomizawa, the voice of Sumire, in 2002. A special, melodramatic farewell stage show was assembled to be her final performance, and a special Sumire-focused anime episode was produced and released to DVD. Sakura Taisen heroines cannot just retire without a fanfare!

The music of Sakura Taisen is, of course, legendary. The slightest clip of incidental music from an inconsequential scene is known to immediately turn a true fan misty, let alone a full-on vocal piece. The absurd, 8-disc Sakura Taisen Complete Song Box from 2002 is the quick way to get ahold of most of it (RPGFan has a lovely review). There’s even a more trimmed-down 120-song set, including Sakura Taisen V tracks, on iTunes for a mere $70.

For a decade, a dedicated Sakura Taisen shop and cafe, the Taishō Romandō, operated daily in Ikebukuro, Tokyo. It was crammed full of Sakura Taisen merchandise, organized by heroine. It featured human-sized statues of the characters and Kōbu. The staff wore Sakura Taisen cosplay, and apprehensively declined being photographed. At the cafe, a small menu of tenuously character-themed sweets and drinks were available. In the back was a shelf loaded with dozens of guestbooks, every page filled with messages and drawings from fans around the country and around the world. 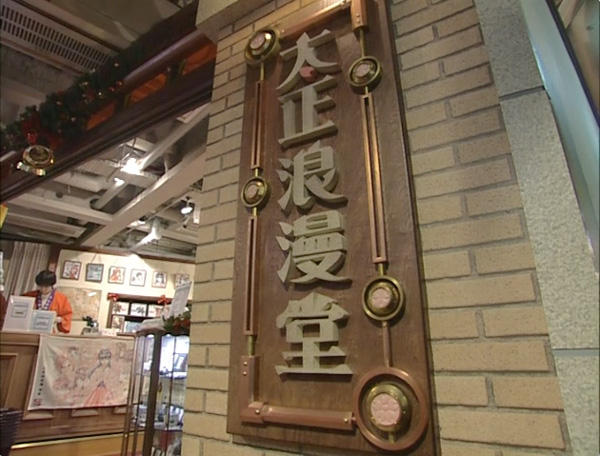 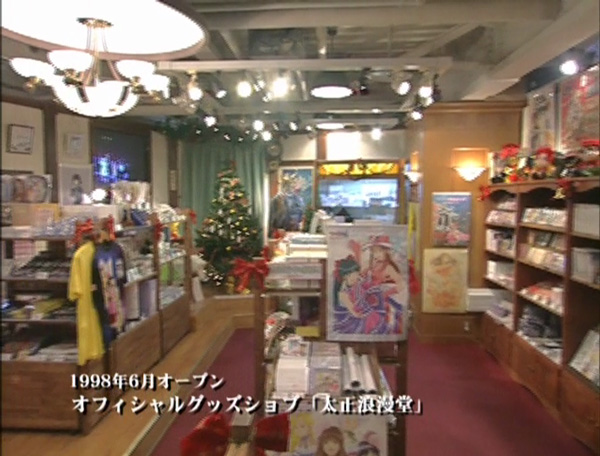 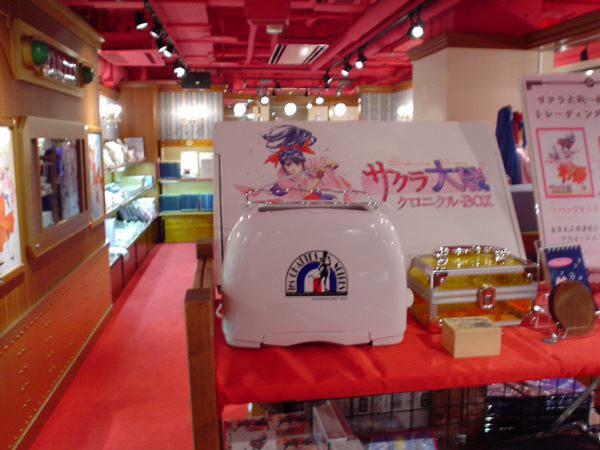 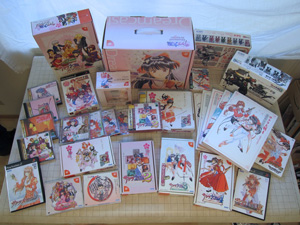 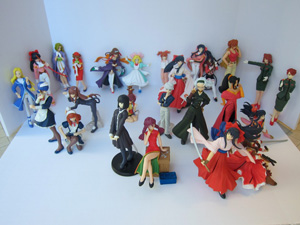 Other series have since successfully blended dating elements into a more standard RPG framework. Thousand Arms, released by Atlus in 1998 for PlayStation, took a less pure-hearted approach, but combined dating and RPG mechanics in a steampunk world. Langrisser 3, another tactical RPG, introduced a Sakura Taisen-like system in which you can develop trust with members of the female cast, culminating in a romance.

Later games added their own RPG/dating hybrid experiences, notably the Ar tonelico series and recent installments of the Persona series. Ar tonelico intersperses visual novel chapters with the RPG sections, with your trust level directly affecting your combat performance, creating a remarkably Sakura Taisenesque experience. Its focus on music and the heroines’ roles as singers suggest a direct influence. Persona 3 and 4 weave the relationship management more directly into the flow of the story, but also include time management like a traditional dating sim and like Sakura Taisen‘s night patrol sections.

The closest thing you are likely to see to a Sakura Taisen 6 is Valkyria Chronicles. Much of the Sakura Taisen team remaining at Sega, headed up by Ryutarō Nonaka and Shuntarō Tanaka, worked on it. It shows: an alternate-history world with wildly unrealistic machinery powered by miraculous technology. Gridless, pseudorealtime tactical combat. A heavy emphasis on developing relationships outside of battle, and how those relationships come into play on the battlefield. Of course, Valkyria Chronicles doesn’t have any of the dating-sim relationship or time management of ST; all of the character development happens on a rail. Conversely, Sakura Taisen doesn’t have detailed roster management, training, and equipment upgrading mechanics. But the overall feel of the games is similar: semi- to fully-campy wartime drama with a sentimental bent.

The Project S documentary DVD that came with the LE of Atsuki Chishio Ni is invaluable for fans interested in the history of the series.

Kayama’s translation guides are a way for non-Japanese-speakers to join in the enjoyment.