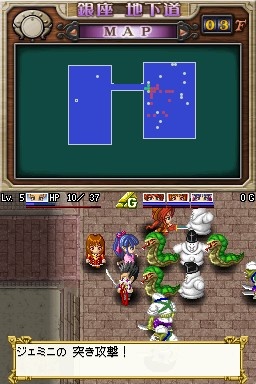 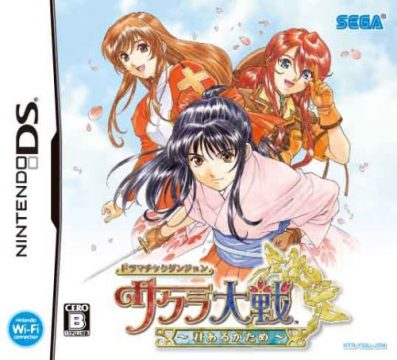 Released in March of 2008, 4 years after the last Sakura Taisen title, this odd return to the series almost seems like a genuine attempt to rekindle the Sakura Taisen legacy in a new genre. Sega advertised Dramatic Dungeon as if it was a completely original and new genre and franchise, though it’s clearly just Shiren the Wanderer mechanics plus Sakura Taisen storytelling. If you’re familiar with Shiren or the Mystery Dungeon series as a whole you’ll recognize much of it in this game: random, “Roguelike” dungeons populated by ever-increasing crowds of baddies and ever-mounting hoards of treasure. It has a fast-paced take on turn-based combat. Input is for the most part like an action RPG, but entities on the screen take exactly one action for each of your actions, so you can make things move as quickly or as slowly as you like. Your companions act automatically, attacking monsters, collecting treasure, and disarming traps, among other things. Interspersed with the dungeon crawling are very brief traditional Sakura Taisen adventure scenes, complete with LIPS dialogues. There’s a multiplayer mode, in which you can race friends to the deepest level of a dungeon, while casting spells to hinder their progress. Development was done by Neverland Company, a long-running studio with some well-known titles to their name: Estpolis/Lufia, the Shining Force titles on PS2, Rune Factory, and even Shiren the Wanderer Gaiden on Dreamcast, which makes sense considering the Shiren similarities here.

Dramatic Dungeon spends an unusually brief amount of time on storyline for a Sakura Taisen game. It takes place after the events of Sakura Taisen V in the year Taishō 18, which would equate to 1929 (in reality, the Taishō period ended at year 15 and gave way to the Shouwa period). Yoneda has retired, promoting Ohgami to commander of the Teigeki. During a performance of The Maid of Orleans by Tchaikovsky, Joan of Arc herself appears; she ends up being the villain of the game. A calamitous event somehow transforms the entire city into a monster-infested labyrinth, and incapacitates the Kōbu. The members of the Teigeki have no choice but to delve into the dungeon and investigate. Eventually it is revealed that Paris and New York have suffered similar fates. As the game goes on you move on to playing as Shinjirō, and ultimately you can recruit a party of your choice from the entire cast of 18 heroines.

The real surprise about this game is that it really isn’t half bad. Once you get over the oddness of dungeon crawling with your favorite Sakura Taisen characters, it’s actually just a quite fun Roguelike with a lot of sentimental value. The combat feels fun, especially when team-up attacks start going off and your teammates are calling out their catch phrases. The character portraits are recycled, but the new pixel sprites and environments are charming. Unfortunately the story scenes are not voiced, save for a very few key lines. If you were in the mood for a dungeon crawl anyway, it might as well be with the ST cast, interspersed with night rounds at the theater just like old times.