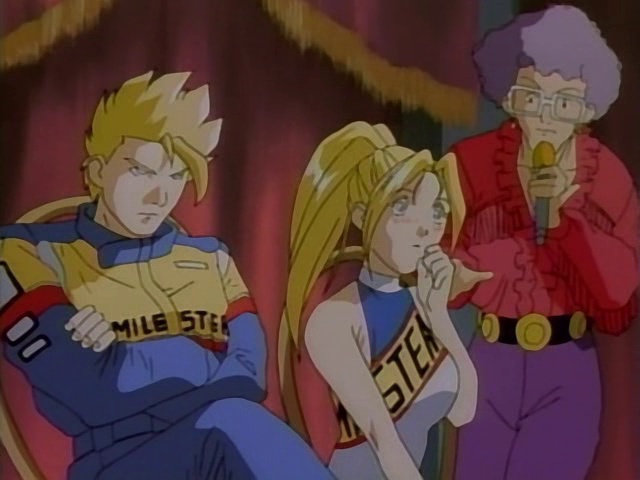 As one of Japan’s hottest fighting game franchises, Virtua Fighter of course had to be made into an animated series, which comes as a prequel to the games. After winning his first fighting tournament, Akira Yuki has been scolded by his grandfather and mentor for losing sight of the true martial arts spirit. (This manifests in him losing the ability to see the stars of the Big Dipper in broad daylight. No, really.) So he goes to America to find enlightenment, where else? While shaking things up in the local China town of New Hollywood (all cities are New here for some reason), he comes across Pai Chan, who is chased by the martial arts school of Koenkan and their effeminate leader Yuan, because their master in Hong Kong is dead-set on marrying her against her will. 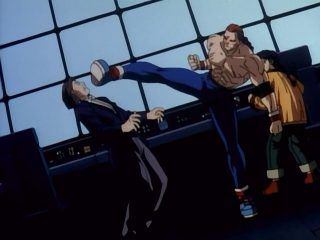 Eventually Akira and Pai meet Sarah and Jacky Bryant, whose corrupt racing sponsor also happens to work for Koenkan. The four team up and travel to New Las Vegas, where Jacky takes part in a race trying to win a new sponsor. But his car is sabotaged by Kage-Maru, who has been hired by the mad scientist Eva Durix to kidnap Sarah. Eva of course wants to use Sarah to create the Perfect Soldier by making her fight against Dural prototype droids. 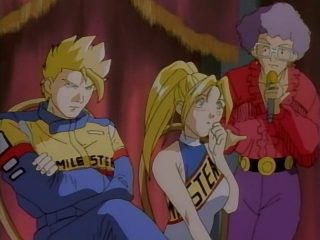 After the remaining trio finds out Sarah’s location in a research facility near New Salt Lake City that’s tied to Koenkan, it is revealed that Pai’s father Lau Chan is the actual head of the triad-like Koenkan (hardly a surprise for fans of the games) and his second in command Ryu Kaorun is the one who tries to force Pai into marriage to take over the organization, thus all major plot threads are tied together. The heroes storm the research facility – not without more hassle with Koenkan and a run-in with local law enforcement in a small Texas village along the way – and smash all the droids, but Eva has them arrested for trespassing after collecting all the fight data she needs for her little project. Sarah in the meantime is taken to Great New York (having two “New” in one name was apparently reserved for Futurama) to the – once again overly effeminate – boy wonder and overall leader of the US branches of Koenkan, Gates.

An illegal wrestling match with Wolf in an underground casino and one terribly ham-fisted moral about friendship later, Akira ends up missing in action, while Jackie and Pai continue the hunt to Europe, where Eva continues her experimenting in a castle at the Rhine. Of course run into the local Koenkan thugs before long, lead by the twin sisters Isabel and Eliza Hower, who fight with sais, steel needles and bladed fans, and are easily the series’ most interesting original characters from the martial arts movie standpoint. Akira in the meantime is taken on a boat to France by Jeffry McWild, to cue an episode where the two fight a weapon-manufacturing paramilitary group that wants to force Jeffry to sell his island, whose knife-wielding colonel oddly resembles a melange of Final Fight‘s El Gado and Rolento. On his search to earn money for food, he meets Lion Rafale, who wants Akira to help him to escape from the grip of his father, who of course is also in cahoots with Koenkan. 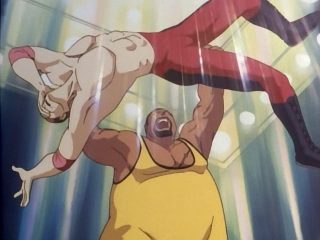 We also see Kage-Maru again, who switches sides and tries to free Sarah, but she has been brainwashed into an emotionless fighting machine, so she attacks him and returns to Eva. Pretty much everyone ends up captured by Koenkan, and all these barely related threads tie together in the Dutch town Gravenhage (an old alternative name for Den Haag), where the once again united heroes beat up the Howers, solve Lion’s daddy issues with some words of encouragement, and then follow Eva and Sarah to Germany. Doing what a ninja does, Kage-Maru finds out that Sarah is controlled through her earrings, and together with Jacky manages to restore her identity. But the evil Ryu also shows up to take matters into his own hands, just in time so Pai can take over as the kidnapped girl again and let herself get deported to Hong Kong.

The final character from Virtua Fighter 2, Shun Di is introduced, who stops a marksman hired by Ryu from assassinating Lau Chan in some Chinese woods. Then he proceeds to prevent Lau from killing a tiger with his bare hands(!) and schools him about compassion. He also tells him that Ryu is after him. This revelation triggers a series of flashbacks with Lau adopting and training his second-in-command as a child.

While Pai gets brainwashed and prepared for the wedding, Akira, Sarah and Jackie follow to Hong Kong by plane, but more distractions await in the form of the Hower twins and their squad of “Fighter Amazons,” Yuan’s younger brother waiting at the airport and other Koenkan thugs on the shuttle bus to the city, where the villains finally pull guns on them, for the first time in the series – tune in a totally silly Virtua Cop reference where they get comically shot. But of course in “reality” they manage to escape just in time to see the bus crash and burn, only to find out that practically the whole city is Koenkan, including the police. 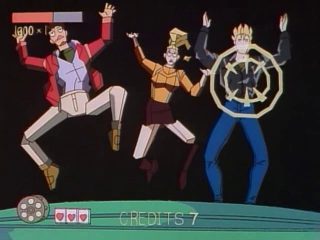 After one-and-a-half episodes worth of nearly nonstop fighting and chase scenes, the wedding is crashed on all levels as Eva betrays Ryu and lifts Pai’s brainwash, Akira and Jacky fly in through the stained glass church window in a stolen police car, and Lau shows up to enact judgement on his insubordinate disciple. All the major players get together for the big showdown, where Ryu is defeated, Master Shun Di reveals Lau’s dark secret, the Chans’ family matters are re- an Koeankan is dissolved, and Eva unleashes Dural for the final battle.

In general, the series isn’t too faithful to its – admittedly scant – source material, at least as far as characterizations are concerned, and favors lots of the typical generic anime slapstick mannerisms instead. Sure, since the games are very sketchy on their story line, the anime creators had to come up with a lot of stuff to fill in the blanks, but transforming the stoic perfectionist Akira into a goofy slow thinker and an eating machine always on the search for more food, is just silly. Oh, and his second dominant character trait is to always end up accidentally groping the women. Hilarity ensues! 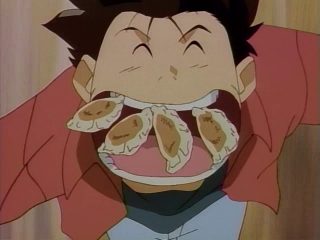 The ladies aren’t treated too well by the writers, either, and are pushed further into typical girl roles. Sure, in the fight scenes they kick just as much ass as anyone else, but they end up getting kidnapped all the time for the male heroes to rescue them, especially as Jacky is turned into an overly protective brother. Sarah also gets a cutesy pet companion, a squirrel named Alexander. Pai is a choleric tomboy, with a horribly (intentionally) annoying tomboy voice in the English dub, while it’s a typically high-pitched girly voice in the Japanese original. She always gets into fights with Akira, and before you know it, a really weird love triangle between Akira, Pai and Sarah is formed – until Stockholm Syndrome makes the latter fall for Kage-Maru. The first character whose naked butt you’re going to see in a shower scene is Kage-Maru, though, so at least the show is equal opportunities with the distribution of eye candy. Anyway, all these characters are better off than Wolf and Jeffry, who only get one-off cameos in the entire series. 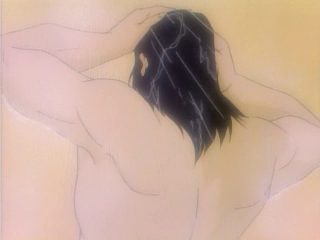 Fortunately, there are plenty of fight scenes in between all that slapstick, and for a mid-90s animate series, they are well done. The animations range from decent to unmoving cells sliding over “speed stripes” backgrounds, but the choreography is good, and the characters have their trademark moves. The fights are not exempt from the more funny anime tropes: Whenever someone does a particularly effective special move, the image freezes in a nice artsy shot, the Chinese characters for the move’s name appear on screen (like in Shenmue) and an overly excited commentator (in Japanese voiced by Shigeru Chiba) describes the move. The same commentator also narrates the wrap-up of the previous episode, with the same excitement for the most mundane events. Also, before every major fight with a strong enemy, Akira goes through the same animation, binding his headband and getting into his stance while reciting his terribly cheesy slogan:

One should never harm others, nor themselves in the face of anger.
My creed, this is the guideline I live by, and it is the law of my masters!
However, it doesn’t apply to scum like you, who have no discipline. Come on!

On the other hand, the series does get surprisingly grim and violent, and frequently defeated Koenkan fighters are murdered by their superiors for their failures. In the introductory fight in an illegal wrestling arena, one of the contestant stabs his opponent in the eyes, upon which a blood splatter splashes over a black background, and he keeps holding his eyes until the winner stomps him to death. The scene is quite disturbing – especially if you just recently watched Django Unchained, where a very similar chain of events is acted out much more graphically. 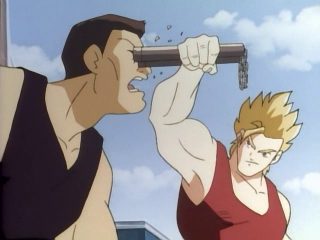 The original series actually has a second season with 11 more episodes after the original 24, where the heroes travel to Japan and Eva returns with Gold Dural, but sadly that was never made available in English. It does have its own separate story ark, however, so there is at least some sense of conclusion in the final English episode.

Yu Suzuki is credited with “Original Story” for the series, and one can observe some really uncanny parallels to Shenmue. Lan Di has pretty much Lau Chan’s role as head of Hong Kong’s biggest crime syndicate, and Ryu looks a lot like an early take at Chen Guizhang before a heel-face turn. The flashbacks showing Akira training with his grandfather as a kid are also very similar to the later scenes of Ryo Hazuki with his father.