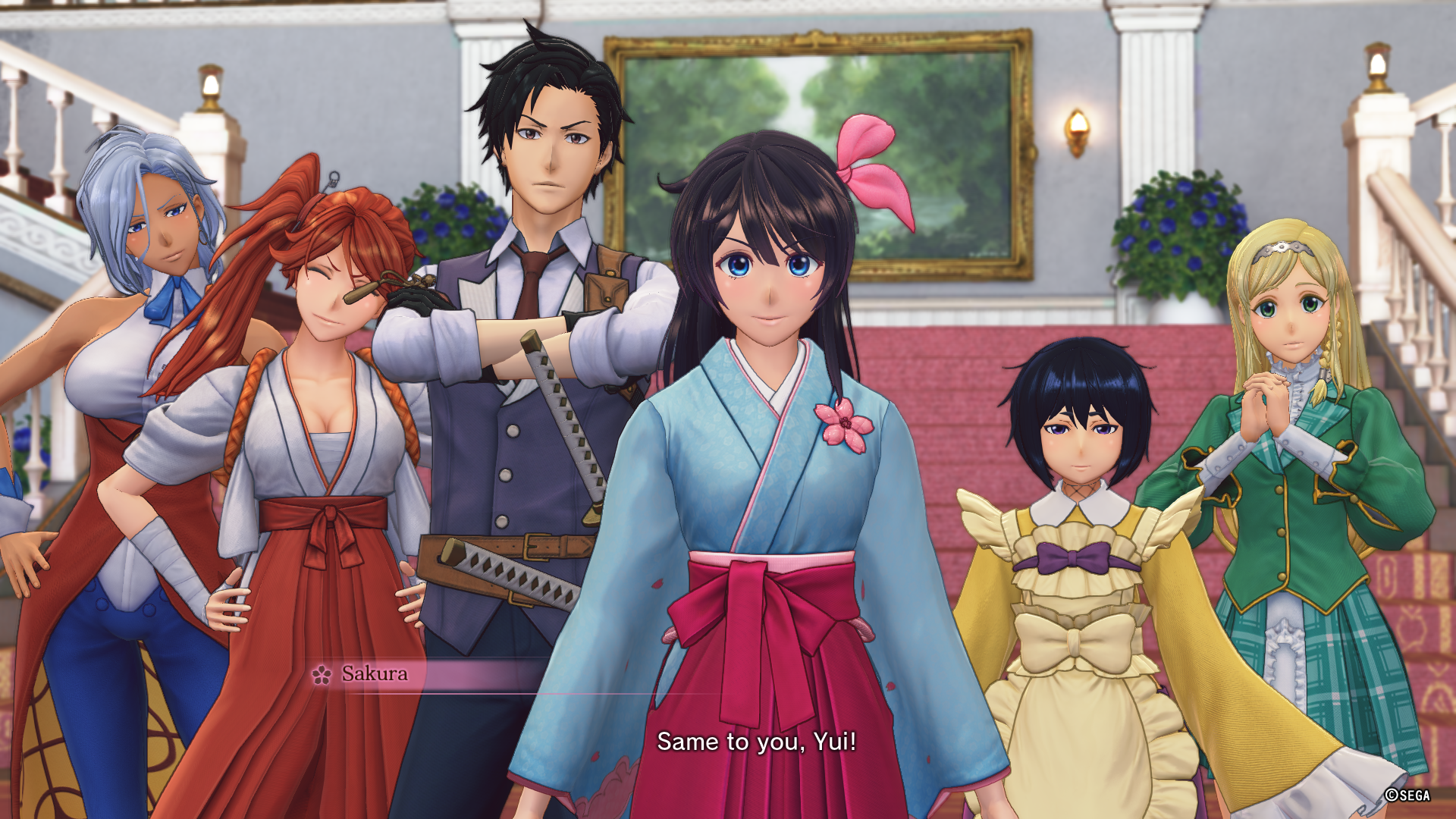 While the Sakura Taisen was a smash hit in the 1990s, the series never quite transitioned beyond Sega’s hardware, effectively dying with the 2005 Japanese release Sakura Wars V for the PlayStation. But enough time has passed that Sega decided to resurrect the series for a new era, with the 2019 release dubbed Shin Sakura Taisen for the PlayStation 4. With the international market more accepting of games with social sim elements a la Persona, it was also released outside of Japan the next year, simply called Sakura Wars.

The game is a soft reboot, in that it the keeps the canon of the previous games, but also seeks to start from scratch in regards to (most of) its characters. The story picks up about fourteen years after Sakura Wars V, after which Tokyo was invaded by demons, which was warded off by heroic efforts of the various Combat Revues. However, the new Tokyo Flower Division troupe has seen better days – the performances are floundering, sales have plummeted, and the theater is near bankruptcy. In order to whip everything into shape, Navy man Seijiro Kamiyama is brought to lead the squad, much the same was is Ichirou Ohgami before him. The cast members are also all new, with the exception of Sumire, the sole returning member of the original crew, who is now the Flower Division’s commanding officer, occupying a similar role as Ikki Yoneda from the first game. 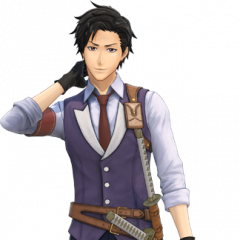 A member of the Imperial Navy, who initially considers it something of a demotion to be assigned to lead the Flower Divison, but quickly warms up to their scrappy charms. As the player guides his actions, he can either be a proper leading man or a mildly lecherous pervert.

The heroine of the story, she idolizes Sakura Shinguji, who saved her during the Tokyo demon invasion when she was a child. Her confidence is shattered through the course of the game, with her friends jumping to her aid. 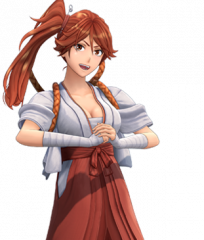 A shrine maiden with a rough-and-tumble attitude who talks like a gangster but has a big heart. 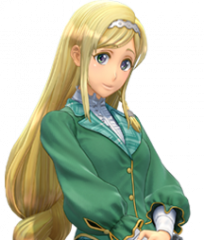 A member of Luxembourg nobility, Claris comes from a family that uses the power of libromancy, which she views as a curse due to its great destructive power. She also enjoys writing self-insert fan fiction. 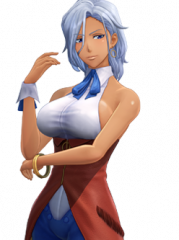 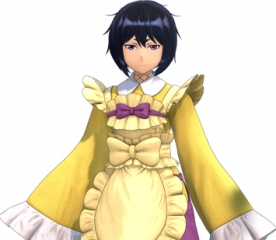 A 13-year old girl who claims to come from a rural Japanese village and has mastered the way of the ninja. Also has a sweet tooth, as most kids do. 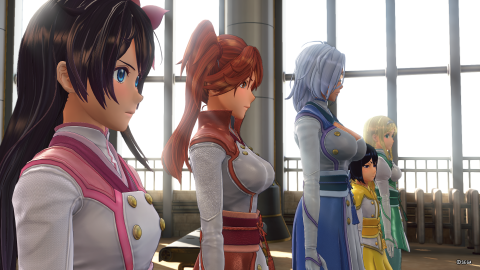 At the beginning of the game, the WLOF, the organization that oversees all of the regional Combat Revue teams, has decided to hold a battle competition. The losers will be disbanded, and merged with the winning team, so the Tokyo team needs to whip themselves into shape in order to compete effectively. Even worse, demons have resumed their attack in Tokyo; one of their leaders, Yaksha, bears a strong resemblance to Sakura Shinguji, who disappeared in the decade prior. How could the old heroine betray her team?

The flow is similar the old games – you spend most of the chapters exploring the theater (and the surrounding areas), triggering events and interacting with various members of the Flower Division team. At certain points, you can respond with three dialogue options (which are time limited), which affect how those members feel about Kamiyama. As their trust grows, the more effective they are in combat. One major difference is that you can walk around all of the halls of the theater, instead of just guiding your character on a map. While this gives it more presence, it also slows down the pace, especially since there’s no quick travel between the rooms. The technology of the era has apparently advanced far enough to allow for steam-powered smartphone equivalents, which is used as a map and database, as well as a device where other characters can call Kamiyama. There’s also a minigame where you can challenge various characters to the card game Koi Koi. 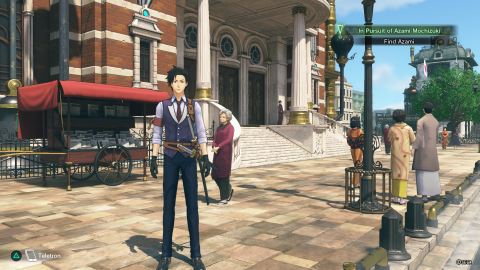 This game also ditches the visual novel-style presentation style of the older games in favor of 3D cutscenes. For the most part, this is an improvement, as they’re much more cinematic than just watching a character portrait while text pops up. However, voice acting is restricted to only important scenes, with secondary bits being text only. In practice, this isn’t much different than similar titles, except since this one is fully animated, it looks and feels weird having these characters pantomime their actions with no voices coming out. The international release is also restricted to Japanese voice acting, as it was viewed as too niche for an English dub. Like Sakura Wars V, there are eight chapters in total, with the overall length is comparable to the older games, taking about 15 hours to complete.

While the previous pentalogy of Sakura Wars games had art by Kousuke Fujishima, his role was replaced by Tite Kubo (Bleach), at least for the main characters. While it’s a stylistic change for sure, Kubo is still a talented artist, and the new designs are excellent. Other illustrators provided designs for other characters, including the members of the competing Combat Revues; these are less successful because their style doesn’t really jell with Kubo’s, and having them interact with other seems like you’re watching two characters from completely different games. It’s already weird enough when you have posters (or bromides) of Fujishima’s characters peppered around.

But beyond all of this, the biggest change is the shift from SRPG battles to 3D real-time combat. Based on the Sonic Forces engine, you directly control the Kobu mechas from an over-the-shoulder perspective, engaging in simple musou-style combat, where you take down hordes of enemies at once, interspersed with occasional platforming challenges. 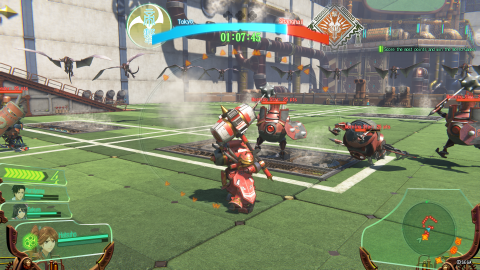 Conceptually, this isn’t actually a bad idea – there was nothing wrong with the old SRPG battles but it’s also alright to update things to keep it from feeling crusty – but it still could’ve used some improvement. You can only control either Kamiyama or (depending on the level) one or two other characters, most of which are restricted to the scenario. It’s hard to feel like you’re bonding with your squad when you barely see them in combat, and it feels like you’re just meant to experiment with them in the simulator side-missions.

The action itself is…okay. It’s fine. There are a few different combos, character specific special attacks when you build up enough meter, and partner abilities if you’ve built up the appropriate relationship; there’s also a Bayonetta-style effect where you can slow down time if you dodge an enemy attack at the right moment. If you perform well, you can also increase morale, boosting your squad’s abilities. However, fighting is also never particularly interesting. The framerate is limited to 30 FPS so the action doesn’t really feel satisfying, and it’s simple enough that you can handily beat it without engaging with any of its (already rather limited systems). Throughout the eight chapters, there’s also a small variety of arena types, and barely any enemy variation. The nicest thing to say about them is that they don’t last very long, nor are they particularly frustrating, so least bearing with them isn’t asking a whole lot.

But there are other issues with this new Sakura Wars beyond the combat. The story is very strong thematically – like the status of the franchise, the new squadron is beaten down, attempting to not only resurrect itself but also prove itself as a distinct entity. But the actual narrative device of the tournament is just really stupid, and very obviously the conceit of nefarious villains. It also makes sense that the game also wants to give the new cast a chance to shine without shackling it down too much to the old crew. Except the in-game explanation is that every single character from the previous games (except for Sumire) is currently stuck in an evil alternate dimension, conveniently removing them from the universe. That’s a harsh fate for these characters, and there’s no real explanation for what actually happened to them through the course of the game. 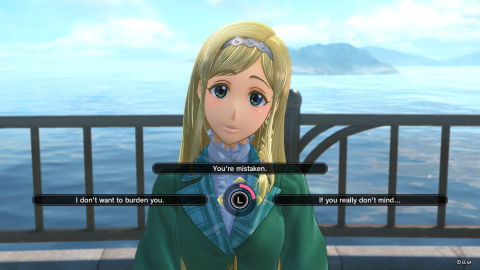 Similarly, other parts of the narrative feels incomplete, or at least undercooked. Even though Sakura is the heroine, a little too much attention is placed on her at the expense of the other characters. With the competing World Revues, even though they battles in trios, only two are shown, with the third just being a nameless character. The Shanghai, London, and German teams are featured, while a Moscow team is mentioned but never shown. A few characters reveal themselves at the end, before they can do much of anything. Much of this seems to be because Sega doesn’t look at Sakura Wars as just a video game but a multimedia franchise; the anime TV series that aired in Spring 2020 is a direct sequel to the game, and helps expand and fill in some of those blanks, but on its own terms, it feels like it’s just establishing things rather than standing on its own.

There are many issues with the overall game, but the experience is satisfying in spite of them. The Flower Division team members may fall into well known character types, but they’re all just so darned likable; it still maintains the same feeling of camaraderie (and light romance) that made the previous games so successful. It also has a fairly laid back vibe, thanks to its light difficulty and nonrestrictive structure, as well as the gorgeous soundtrack, supplied by series veteran Kohei Tanaka. The concept is still novel (particularly for those who never played the previous games, which is probably most of its audience) and its universe is such a delight to inhabit, that its pleasantness makes its other problems easier to deal with.

It’s hard to measure the success of Sakura Wars‘ rebirth, as it won’t really be felt until Sega makes future plans for it. They’ve definitely set down a good foundation, even if there’s plenty of room to grow, and it’d be a shame of this iteration was the last we saw of Kamiyama and crew.

Kitty on Your Lap