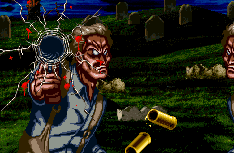 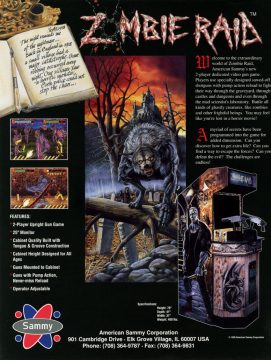 There’s no genre more cathartic than the simple arcade light gun shooter, a sort of game which merely requires you fire at nearly everything that moves. It is also one of the oldest genres of electronic gaming, predated by solid state machines using sensors to simulate a target being shot. It wasn’t until this premise was converted into a virtual medium that shooting games could begin to simulate the actual violent consequence of living targets blown away by bullets. The first known shooter to heap on buckets of viscera was Exidy’s Chiller, a severely controversial game that involved racking up targets by mutilating not-quite dead humans in various methods. The most popular blood-laden light gun series is Sega’s House of the Dead, where you wage war on generic zombies by blowing off their limbs and eyes. Somewhere between these two milestones of gun-based gore was Zombie Raid, an unassuming shooter by the ever-obscure Sammy corporation that is more or less House of the Dead Zero despite having no direct affiliation with Sega. While not the most original video zombie assault experience out there, it does at least offer a fun ride fraught with gibs every which way. 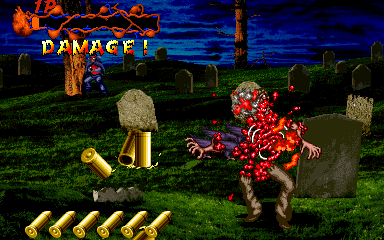 In the year 1918, your role is that of Edward Windsor, a self-described “miserable detective” whose idea of investigation involves obliterating everything with a shotgun. Edward grumbles about a tip about strange goings-on in a distant village, and while it doesn’t sound like a job he’d normally be interested in, he needs the money badly. On the way to an ominous castle, Edward is joined by Charles, an errant monster hunter, and they team up to take on a bizarre purple man who sounds exactly like Peter Lorre. The vague narrative thread the game attempts to follow is quickly overshadowed by the sizable blood-to-screen ratio that occurs within the first few minutes and never lets up. 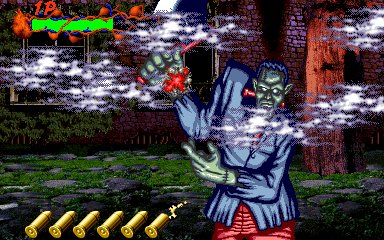 Zombie Raid is the bloodiest light gun shooter since SNK’s Beast Busters, another pre-House of the Dead zombie blastfest. Every single zombie you hit bursts open with organs and blood splotches flying about everywhere with ribcages and brain matter exposed. The enemy sprites are well-drawn and are juxtaposed against digitized backgrounds, a move that looks a bit cheap but also makes the game feel darker and somehow creepier while giving it a decidedly unique look. Sadly, the sound design isn’t quite as choice. The compositions themselves aren’t any great shakes to write about, and they’re furthered hampered by poor recording quality which makes it even less remarkable alongside the many gunshots you’ll be incurring. There is a very sparse bit of voice acting in surprisingly clear English, though it mostly serves to enhance the cheese factor alongside the typo-laden text. 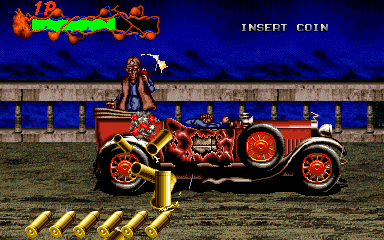 The most prolific feature of Zombie Raid‘s design is sadly lost on emulators, as the guns originally designed for it are pretty darn awesome. The cabinet features a pair of sawn-off shotguns mounted on a stand akin to Operation Wolf, with reloads being carried out by a sliding pump. Those with quick fingers can potentially turn the shotgun into a semi-automatic tool of destruction with unlimited ammo by pulling the trigger and spamming the pump. Zombie Raid is quite a cathartic experience with lots of enemies to blow apart, like the basic shotgun zombies, stockier ones with handguns and bombs, more typical-looking brain-exposed zombies that throw stakes, gargoyles with acidic puke, bald zombies with giant cannons, and other ghastly ghouls ready to be terminated at your gun. While your default weapon is enough to cause suitable damage, you’ll be able to pick up automatic bullets that can be fired in greater capacity before reload, widespread shotgun shells, damaging fire bullets, and even an incredibly rare lightning weapon that can only be found in hidden nooks. 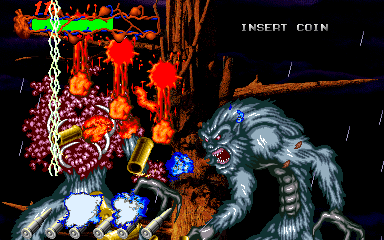 The stages themselves are fairly long and take you through a cemetery, a stormy road, a courtyard leading into an underground cave, a castle foyer, a crumbling bridge, and an insane laboratory. Some setpieces admittedly drag out a bit long, but the action doesn’t often relent long enough for the game to get boring. Aside from the zombies, you can also incur mass amounts of property damage by shooting at background objects, adding to your score and often dropping handy power-ups. A few brief interludes allow you to calm down, like Charles speaking to you, the game’s mysterious antagonist taunting you, or the bit where a photorealistic corpse drops down in close view with maggots writhing all about it. That last one isn’t so much relaxing, but it’s interesting to see the game do more than just chuck wave after wave of undead at you. 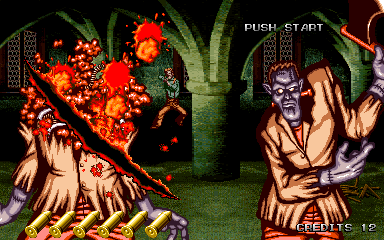 Easter eggs are abound at certain points if you know where to shoot, such as hidden rooms which offer unique and not-commonly available powerups. There’s also a fair spread of weirdness floating about, like a random cartoonish female in the graveyard or a cute one-eyed goblin peering out of a well, though you really have to dig around to cause that weirdness to pop up. You can’t be too hasty to shoot also, as unwilling citizens and prisoners will cause you to lose life if shot. Beating hearts restore your life, but bad potions labeled “Drink Me!” will sap it. 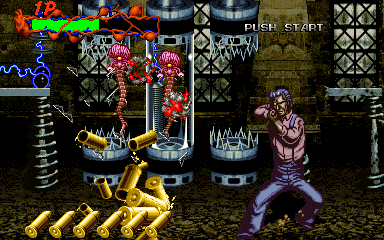 Every now and again, you’ll face off against a massive boss monster of which there are four, each of which takes an unholy amount of punishment to turn into bloody goop. The final boss in particular is a real quarter-draining meanie, but you might not live to see that fight if you’re unlucky. There are three colored crystals which unlock the door to the final boss, the green one which you automatically get after destroying the penultimate boss. The red crystal requires you to slay every zombie coming off of the elevator at the end of the cavern level (easier said than done as these zombies are tougher than normal), and the blue crystal needs you to destroy a weird statue with three mini-crystals on it. This statue and a couple of other places in the game denote the order in which the crystals need to be placed when you get to the last gate. 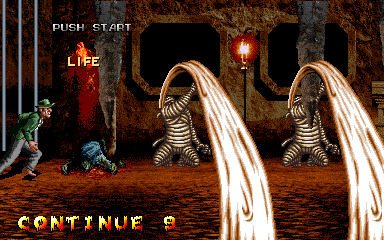 If you fail to find this trio of MacGuffins, you are cruelly denied from the final boss and unceremoniously dumped into a spiked pit, preventing any more continues on to the end. If you forget the order or screw up due to nerves, you also get killed without a real conclusion. While it’s a novel concept to add this extra element of awareness besides just shooting semi-living targets, it feels more like an annoying imposition preventing you from really beating the game. 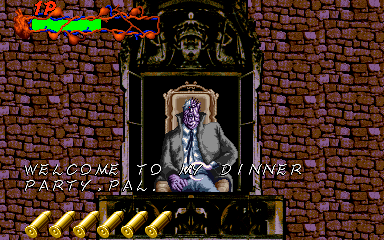 Still, this bizarre crystal-hunting requirement is probably the most annoying thing about Zombie Raid. That, and it’s incredulously tough, requiring the consumption of much quarters to see the end which you may even fail to see despite coming so far. It may be a pain to play if you’re seriously looking to beat it, but if you take it for what it is, Zombie Raid is a fun and gory game that was released in a time when “gamesploitation” was at its zenith. With Mortal Kombat and Splatterhouse having gained notoriety in the media and a myriad of violent-for-the-sake-of-violent games beckoning the creation of the ESRB age rating system in console titles, the arcades continued to churn out disturbingly visceral games of many genres including light gun shooters. This would lead to House of the Dead two years later which would become the definitive zombie arcade shooter, but before its prominence, Zombie Raid was the unknown forefather that could have paved the way for HotD if Sammy weren’t such a perpetually obscure company. Still, they had a better handle on the arcade shooter genre than the one-on-one fighting genre (the obscenely terrible Survival Arts, to wit), and Zombie Raid is an overall amusing and high-energy game which any horror lover can enjoy. 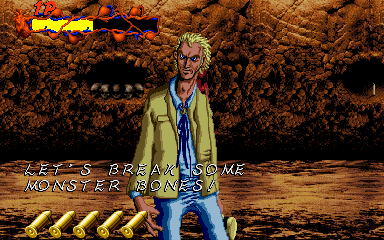