Pugley’s Scavenger Hunt is based on the 1992 The Addams Family animated series and is even more difficult than the previous outings. As the title states, there aren’t any high stakes for Pugsley, he just has to explore the Addams mansion in order to find six items for his scavenger hunt, but everything in the house is out to murder him (it ties in with the characters’ masochistic nature). Unlike the previous titles, the areas are much more straightforward and the exploration is very limited. The basic gameplay is the same as the other 16-bit titles, though: jumping on enemies’ heads, walking on or headbutting blocks to make walls disappear, avoid myriads of spikes to reach the bosses and jump on their heads to defeat them and obtain the items (which don’t even appear and are just checked off of a list). On top of that, Pugsley doesn’t even have any weapons to fight the enemies with. 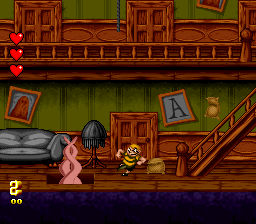 Being based on a cartoon, everything looks much more colorful and animated, and the graphics underwent a big technical improvement, with several parallax levels and various effects. The most interesting one is the stage that looks like it’s being seen inside Grandma’s crystal ball, with the old crone being in the background at all times. The geometric style of the underwater sections is also cool, while there are very few enemy types and several of them are lifted from the previous Ocean game with a new coat of paint (the underwater kittens are kind of funny though). The character sprites perfectly recreate the cartoon’s 90s style.

However, all that graphics display only makes things even harder, since the game is all about platforming precision, and it’s not easy to concentrate on enemies and hazards while flashy effects and animated backgrounds distract you. In the crystal ball stage mentioned above, everything is so cramped and the scrolling whizzes by so fast that it is very easy to get impaled on spikes over and over again. Though it’s amusing to see a shrunken Pugsley travel along the tables of Fester’s lab among beakers, or a surprisingly clean bathroom full of bubbles. However, other stages such as the attic or the basement are really boring and drab-looking. Also, there’s almost nothing that ties the game to the animated series, save for an appearance of the Normanmeyer family, the Addamses’ neighbors in this continuity.

The game is also unforgiving in that there are no continues or passwords, you just have to do it all on one sitting, and expect to see a lot of times the game over screen with Pugsley getting boiled alive in a cauldron. There’s only the option in the beginning to choose the number of lives and hearts to start the game with. And when you complete it there’s not even an ending proper, just a few lines of text. Damn you Ocean! It’s difficult to turn an animated series like this one into a game, but they managed to make it a generic borderline-masocore platformer with not much that makes it really worth it to be played today, unless you’re a masochist like the Addamses.

About the NES and Game Boy versions of this game: they are actually downscaled ports of the 16-bit Addams Family title, with Pugsley in place of Gomez (so he’s not really scavenging anything), the typical downgrading of graphic and sound elements (monochrome backgrounds and no BGM at all), and to add even more frustration to the mix, some doors don’t always bring you to the same locations every time. Funnily enough, these versions of the game have both passwords and unlimited continues.

The Pugsley sprite looks fairly creepy with his slanted black eyes and huge mouth. He also has to pick up various sweets instead of money, since in the TV series he was portrayed as an overweight boy with a sweet tooth. Not to mention that the pose he takes whenever he’s jumping, combined with the weird sound effect, makes him look like he’s farting all the time.