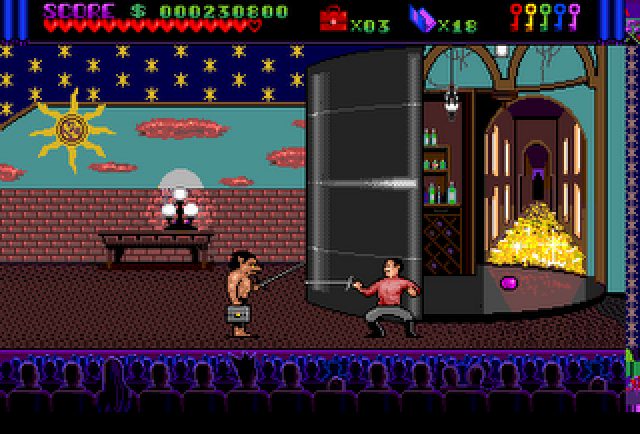 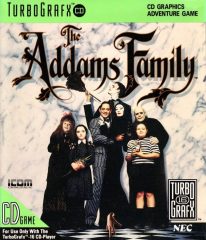 The TurboGrafx-16 CD version of The Addams Family, developed by ICOM Simulations and published by NEC Technologies, is unrelated to most of the others. For one, it flips the premise around: the protagonist is not Gomez, but Tully Alford. His mission is not to save anybody, but to explore the Addams mansion in order to find their fortune, and the Addamses this time are enemies. The CD support feels wasted: the graphics are ugly and poorly drawn, and the disk space is seemingly used just for some grainy stills lifted from the movie, a few digitized speech clips and the theme tune ripped directly from the TV show (not the movie). For the rest there are annoying 8-bit-ish sound effects and a number of ambient noises among the sparse soundtrack (some of which are fairly creepy, such as the screams in the “torture cellar”). Also, for whatever reason, the whole game is set as if it were a movie theater with rows of people watching under it, not too unlike Namco’s Wonder Momo which was set as a theatre play.

The concept of the game again has the Addams manor as a hub level, set as a sort of metroidvania like the side-scrolling 8-bit games, where one needs to defeat bosses (the Addamses) and/or find colored keys to unlock doors; in theory it could be an interesting idea, however the poor gameplay and dull game design make it not worth the effort. The beginning is already indicative, with Tully wandering through a drab-looking moat and having a hard time avoiding the various enemies and the golf balls being launched by Gomez far in the background: unappealing and frustrating. 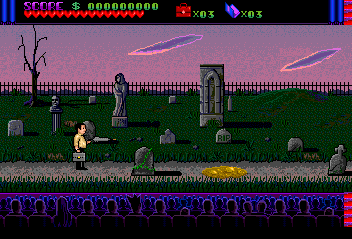 Tully is slow and his jumps are floaty, and his only weapons are an umbrella that can shoot bullets and can be slightly upgraded, and a blade that has to be picked up in order to get fencing against Gomez. Some rooms only have treasure in it, others nothing outside of random monster sprites, others are traps that take us back to the start, to make a fairly short game artificially longer. The collision detection is poor as well and in general the game is fairly unimpressive and monotonous; the only interesting things are some bizarre moments like when, after defeating Pugsley, Tully drinks a potion that turns him into a werewolf (?) which works like an additional life. Despite all this, the game has a small cult following in some corners of the net, perhaps just because of how bizarre it is.