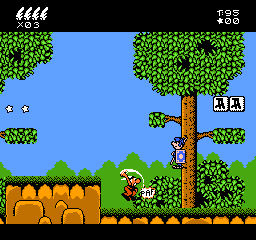 It’s almost amazing to think about, but Astérix games had been steadily released since the early ’80s, yet it would be as late as 1993 before any of them graced a Nintendo console. To make up for this puzzling absence, French publisher Infogrames released their new Astérix game on all Nintendo consoles at the same time. Developed by Spanish Bit-Managers, each game would be different from each other while sharing the same basic storyline and setup. This time around it’s Obélix that has vanished from the village! So it’s up to Astérix to rescue his lifelong best friend before the Romans throw him to the lions.

The NES version takes a page out of Sega’s book and returns to the more simple and colorful look of 1991’s Astérix on the Master System. The locations are vibrant, the mood is more upbeat and the punch has thankfully a wider reach. You visit four acts, which take you through Gaul, Helvetia, Spain, Egypt and Rome, with each having 3-4 levels within them. Each of these worlds offer staple hazards from the platforming genre with ice making you slide, boulders crashing down on you and massive amounts of fire jumping around the ground for you to avoid. The enemies range from Romans to Egyptian soldiers, but the majority of enemies you face are actually from the animal kingdom – sparrows, piranhas, snakes, spiders and, of course, wild boars. It might sound like this game is going in the same direction as Astérix and the Great Rescue, but in reality it’s actually quite fun…and damn funny, in fact. It’s aimed at younger gamers so the difficulty isn’t suffocating, but it still packs a challenge with some good level designs and accurate controls to guide you along. On all the stages you’ll find big A blocks which can be punched in order to get stars for points or other secrets. You can also find a magic potion bottle which gives you invincibility for a short run. After each act, you also got a bonus round, which is either you breaking barrels thrown at you by a pirate, or log rolling at sea. There aren’t any bosses to be found outside of the last boss, Briseradius.

What really makes this game stand out is the soundtrack. Alberto Jose González had formerly worked on minor titles on the ZX Spectrum, MSX and the Amstrad CPC but this would be his first soundtrack for a big title on the world’s best selling home console of all time. His debut couldn’t have been any better, as the soundtrack pushes the NES sound chip in a new highly fresh direction. With inspirations from Tim Follin, David Whittaker and Ben Daglish, it offers a sound somewhat reminiscent to titles like Solstice. It’s an insanely catchy soundtrack with unusual percussion elements, groovy bass and feet tapping melodies. It also offers almost unrivaled emotional content for an NES soundtrack. The Game Over theme is one of the most cerebral tunes you will find on the console, and the Credits is has a great sense of reminisce going for it. Whether or not the game itself tickles your fancy, the soundtrack is of such quality that it becomes a must have for that alone and stands up with the very best of what the NES has to offer. Gonzales would go on to score numerous Astérix games for Infogrames and also handle other franchises like The Smurfs, which are some of the most amazing game music unheard by most gamers.

Astérix on Game Boy was released near simultaneously with the NES version and plays very similarly. The locations, enemies and order remains the same but in order to make up for the smaller screen, the layout is completely changed to make it more portable friendly. The backgrounds have also seen a change and boasts more detail than its NES counterpart. They even added bits of parallax scrolling to the background, which is impressive, though the use of it is minimal and doesn’t distract nor really catch your eyes often. The difficulty in terms of enemy behavior and patterns are easier here, and there seems to be more extras to be found to further give gamers a slight break, but the controls are strangely unresponsive at times, especially when it comes to jumping. It’s a shame that the controls would take a hit, because it had quite a bit of potential, and at times feels similar to Super Mario Land. Gonzales is the man behind the soundtrack on this version as well, and it is changed up with a few new tracks. The game sounds fantastic on headphones, though it feels like it plays more by the rules of the genre, while the NES version has a bit more of an experimental sound.

The Super NES version differs greatly from the 8-bit versions in a number of ways. Following the same story of rescuing Obélix, all the stages have been redone, the graphics have gotten a major boost and the game is much much longer than any of the 8-bit games. Developed internally at Infogrames, it feels quite different too as Astérix controls somewhat heavier than before. He is also considerably slower, and that is the flaw that really brings this game down. Astérix’s jump is exceptionally slow and will usually not reach over to your preferred landing location. You can do a running jump to gain more air but the run takes too long to get up in speed, leading to many frustrating deaths, often from falling into pits because your jump simply did not reach.

The levels looks vastly different too, and acts more like an open playing field for you to find the exit instead of just simply walking left to right. Some stages drag on for way too long, and there is no password or save feature, so it’s quite a chore to get through all 50 of them and find the often non apparent exit. A few new items have been thrown in, such as the green magic potion which lets you fly Mario 64 style with the wings on your helmet. You can also find bones to call Idéfix in and take out some Romans on screen, or a lyre so Assurancetourix flies in on a cloud and freezes everything on screen. The enemies are the same bunch of angry animals as before. It’s such a puzzling choice to resort to unoriginal animals when in the comics Astérix fights such a wide arrange of different characters. It seems so lazy by the programmers to just make Astérix punch defecating crows and porcupines. The art style is also somewhat strange, with some enemies and backgrounds being fittingly cartoony and colorful to suddenly seeing others drawn in a photo realistic style as if they were just taken from another game. Astérix himself looks good, at least. The ending is also one of the biggest anticlimaxes in game history as you simply find Obélix sleeping in the middle of the last level. No end boss, no last obsticle, just walk over him and fade to the ending. The music was not handled by Gonzales but by Alone in the Dark composer Frédéric Mentzen. It’s good with some good bass lines keeping it interesting, but doesn’t come close to what Gonzales scored for the NES and Game Boy. 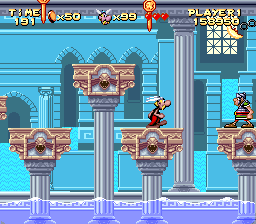 The SNES version was planned for a US release in 1994 but was cancelled despite ads popping up in game magazines. While no reason has ever publicly been given, it’s a good guess that Electro Brain, the planned publisher, just didn’t believe in the name value of Astérix to sell in the US. None of these titles redefine the platforming genre nor do they screw them up entirely. It doesn’t really retain any of the humor from the Astérix comics or movies but in the case of the 8-bit releases, you get two fun easy to pick up and play games with some fantastic music.

These games started a unique promotional deal where if one purchased either version of the game, the box could be taken to Parc Astérix for a free day pass. Most releases throughout the mid ’90s would use this marketing tool. They usually expired by the end of the release year. 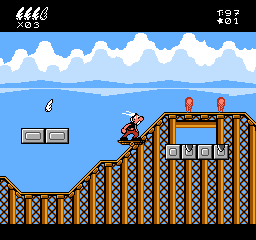 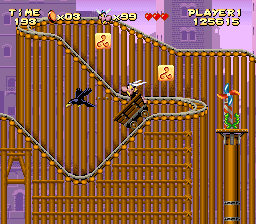