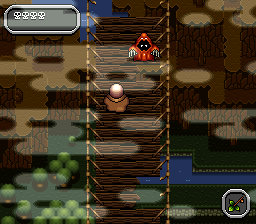 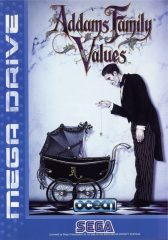 The 1993 sequel to the movie was fairly well received and as such Ocean made another video game out of it, but as a top-down action adventure game rather than yet another masocore platformer, though it’s still quite difficult. The plot, as it happens, has just the tiniest resemblance to the movie: psycho killer Debbie Jellinsky kidnapped baby Pubert and locked the family outside their mansion, now it’s up to Fester to look for clues in the middle of swamps, deserts, lava caverns and such, by completing quests and unlocking several dungeons.

Fester needs to find the other members of the family looking for Pubert in order to receive hints, trade items and get more life points. The most helpful family member is Grandma who will bake for us different kinds of cookies, with effects varying from replenishing the lifebar to invincibility; their usefulness however is hampered by the fact that Fester can still get attacked while eating them and that Grandma will only ever bake two for every kind, and then only when a dungeon is completed. Quests are really bizarre even for the Addams’ standard and include things like escorting a talking man-eater plant (that later turns into a boss) and helping a Q*Bert-esque creature to find its voice that was stolen by a witch.

Fester’s only means of attack for the first third of the game is a lightning bolt that comes out of his hand, Palpatine-style: it sounds great but it’s much less effective than it appears. For starters, Fester stops in his tracks every time he uses it, and enemies are quite mobile and faster than him; also, every time he gets hit, the lightning bolt becomes shorter and less powerful, thus forcing him to get closer to enemies and much more likely to get hit again. Speaking of enemies, they essentially come in two flavors, big and small. Big ones take a lot of hits to get blasted, while small ones are very fast, sometimes unpredictable in their movements, and often they hide behind the scenery, meaning that they appear suddenly when it’s too late to avoid them. Dungeon bosses aren’t too difficult for the most part, but the problem is getting to them, since most dungeons are labyrinths of portals, switches and puzzles.

The overworld isn’t much better, since the geography of the areas is confusing, Gomez’s map isn’t too useful and there’s the risk of running in circles, not to mention that the other members of the family aren’t always in the same place after you beat a dungeon. Other design choices make the game much harder than it should be: continuing after Fester gets defeated places him near the latest entrance he reached, but with the same amount of energy he had when entering it, and since enemies rarely release half-points of energy after defeat and the few energy-restoring “A” emblems scattered here and there aren’t that useful either, he could be as good as dead. There are passwords to save progress, but the only way to get them is to find Cousin Itt who is hidden in one part of an area, making even a simple thing like saving the game needlessly complex. On top of that, the game’s manual isn’t helpful at all, listing some items that don’t exist in the game proper and leaving out others that are actually needed! 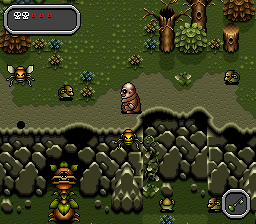 It’s a shame that Addams Family Values is so frustrating and unfair, since the actual gameplay is solid, while not revolutionary, and the rest is very polished. The graphics are quite detailed in that typical European sort of way, with lots of transparency effects and a round cartoony style for all sprites (the digitized actors’ photos that appear in the dialog boxes actually feel out of place) with nice shading and volumes. The soundtrack by Keith Tinman is amazing and for the most part would be more at home in a “serious” horror game rather than this campy haunted house-style adventure. It’s eerie, creepy and atmospheric with lots of ambient effects like water drops, chimes and digitized laughter. One of the tracks seems to be based on the theme for the 1979 horror movie “Phantasm”. Even the jolly Addams Family theme in the title screen turns into a dark, echoing tune after a while! The decidedly British sense of humor in the dialogues is also quite amusing and helps selling the weirdness of the characters, with Fester either being annoyed by those who would help him or treated like an idiot by the various monsters and creatures populating this strange world.