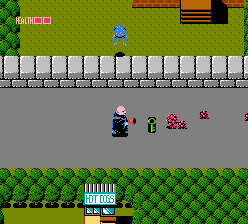 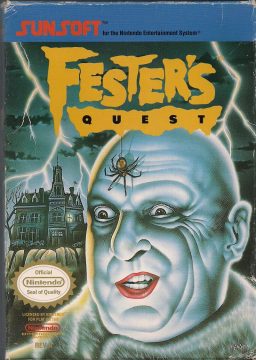 The Addams Family, the oddball and macabre characters invented by cartoonist Charles Addams for The New Yorker in the 1930s, have spawned a multimedia franchise that still goes on to this day. First there was the 1960s TV sitcom, which named the characters, gave them clear relationships between them, and was the basis for all subsequent adaptations. There were a 1970s animated series, a 1991 Hollywood movie treatment, which then spawned the best-selling pinball table of all time, and its 1993 sequel; they were followed by another animated series in 1992, a sitcom remake in 1998 (The New Addams Family), a direct-to-video movie in 1998 (Addams Family Reunion), a Broadway musical adaptation in 2010 and a 2019 CGI animated movie with an upcoming sequel.

Naturally, these incarnations also had a number of tie-in video games, though the first one of them wasn’t really based on any incarnation in particular, except maybe pure insanity. Most of them are also somewhat better than the usually mediocre games based on other properties, but for some reason almost all of them are also punishingly difficult and rife with obtuse and inexplicable gameplay choices.

Fester’s Quest (or “Uncle Fester’s Quest” according to the title screen) starts with an animated intro featuring the titular Addams moonbathing while wearing a wizard hat. Suddenly UFOs appear, beam down aliens in his neighborhood and also kidnap his brother Gomez, so he gets his blunderbuss and starts chasing the space creatures. This bare-bones plot sounds like a bizarre dream, and in fact, according to an interview with the producer and designer published on Kid Fenris’ website, it more or less was. That’s the reason why a game about these characters was developed in the 1980s, when the popularity of the sitcom had almost waned and the films had yet to come. On top of that, it was developed by a Japanese studio, Sunsoft, whose members didn’t really know (or care) about a 20-year-old American TV program that was so culturally alien to them. All this to try to explain why the game came out the way it did.

The game is a top-down action shooter with Fester picking up power ups, blasting blobby aliens, navigating the maze-like environments and finding the big bosses to get to the next area: in practice, it’s a mediocre version of Sunsoft’s own Blaster Master (the development team was the same), without the side-view platforming sections and everything that made that game good and interesting. The weapon seems to actively hinder the game’s progress, since some of its upgrades make it shoot in a wave pattern, and then swirling bullets, that miss enemies more often than not; also, walls cancel bullets and, since most of the game is set in cramped corridors, it makes this sci-fi weapon useful only at maximum power, when it shoots in an almost straight way. Fester also has no real advantage on the aliens, being pathetically slow and starting with a mere 2 energy points (with additional 2 hidden around the stages), while the creatures respawn as soon as the screen scrolls, and some of them even multiply. The only positive thing is that, among the items, there are invincibility potions and nooses that are used to summon Lurch (“You rang?”), who functions like a smart bomb. Then there are the bosses, bizarre humanoids that take ages to get taken down in battles of attrition where they repeat the same attack pattern endlessly, with no real strategy to them. (Luckily, there’s a glitch involving items that immediately defeats them) 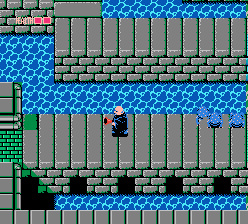 Fester alternates between the overworld and the dungeon-like sewers to find the way to the bosses and get on board of the mother UFO in the center of the map, which is the final gauntlet; he needs to find other family members to get items, collect from dead enemies light bulbs (one of the few nods to the source material: Fester was able to light them up in his mouth) that let him see while in the sewers, and keys to open the doors of the houses in the overworld. Entering these houses switches the graphics to a first-person perspective. These pseudo-3D mazes add nothing of interest to the game: they are totally empty, have choppy scrolling, and they just break the pace of an already lethargic gameplay.

But that’s not even all: dying makes Fester go back to the very beginning of the game, albeit with all the items and upgrades you picked up until then still in the inventory. Given that he has no extra lives or ways to save progress, this is almost guaranteed to make one tear out their own hair in frustration and turn bald like Fester himself. For a Sunsoft game, this is also surprisingly full of slowdowns and sprite flickering; the only thing that is up to the company’s standard is the cool soundtrack by Naoki Kodaka, with several rocking themes and an interesting calypso-flavored rendition of the Addams Family theme on the title screen.

Everything about Fester’s Quest seems made to confuse and frustrate the player. However, despite the nonsensical plot, absurd difficulty (even mentioned in the TV commercials!), repetitive and rage-inducing gameplay, dull graphics, disturbing cover art and the fact that in the 80s not many still really cared about the Addams Family, the game incredibly managed to sell around one million copies. Luckily for European players, though, their version of the game was modified to be easier, specifically making bullets go through walls and making enemies less tough in general. The game was not released in Japan at all.

There apparently also exists a probably unfinished homebrew Atari version of the game made in 2011 by a Polish developer named “Gonzo”, that however is not a remake but a more standard side-scrolling platformer, with graphics seemingly ripped from other NES games like Faxanadu.