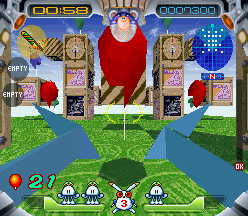 A year after the first Jumping Flash!, Exact released a sequel. This time the plot is even more ridiculous. After having been defeated by Robbit, Baron Aloha retreats to the home planet of the MuuMuu, Little Muu. In an act of cosmic comeuppance, Little Muu is attacked by Captain Kabuki, a planet sized phallic monster, who takes chunks of Little Muu and imprisons them in glass bottles. The Baron, being a tax-paying constituent entitled to government benefits, calls Universal City Hall. UCH sends out Robbit to get the Baron his planet back. Cue new characters.

Robbit’s on-board A.I. is back and literally looks like a bear this time (“Kuma” means bear in Japanese. “Taro” is a typical male suffix in Japan). However he’s several times more annoying, as he seems to talk much more frequently. When the game is beaten, a second onboard computer that sounds like the Kool-Aid man becomes available. 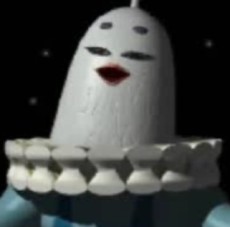 Known as Capitao Suzuki in the Japanese version. The ginormous villain of Jumping Flash! 2 who likes to steal chunks of the planet Muu and bottle them. He talks in a campy manner and in every cut-scene makes an awful rabbit pun. 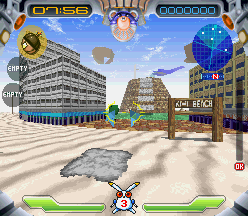 Jumping Flash! 2 is very similar to the first game, a fact that didn’t escape critics when it was originally released. Many of the stage themes are barely altered. Instead of a town we have a beach, circus instead of carnival, another “space level”. There are no major revisions to the play mechanics, nor is Robbit’s jumping utilized in any new ways. You have the standard “jump higher” stages, as well as the “roller coaster” and “underground bunker”. And while they’re fun, there’s the creeping sense that this is all too familiar.

It seems that the developers took note that gamers said Jumping Flash! was “too easy”, but instead of making it more challenging, the developers simply made the game more annoying. The stages are taller, there is less solid land on the lower levels, and the platforms in general are thinner and much more segmented. Also, most enemies no longer naturally fall within Robbit’s laser sites. They hover maddeningly above or below Robbits sights. The invincibility power-ups suffer the most from this transition, as the areas are small, so enemies never group together. You never get the heady thrill of dashing straight into a herd of enemies knowing they can’t hurt you. 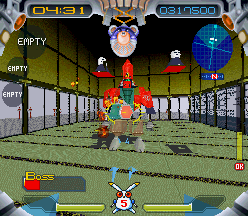 Instead of collecting Jet pods, this time you’re rescuing three Muus per stage. The visuals have been improved slightly, with better differentiation between objects and convincing effects when Robbit goes underwater. The draw distance is also improved. Expanding the size of the stages however accentuates the game’s biggest flaw – most of the stages are incredibly symmetrical. Large structures show up in parallel on stages, as if there was a imaginary line drawn through the middle of the platform. Exact compensated for the larger size of the levels by increasing the time limit (to as much as 12 minutes for some levels). More than making sure the player gets lost, in every level there is at least one Muu that is so far flung, that they never appear on the screen or radar while wandering around the main play area of the level. The player’s only hope is to either happen upon a time stop or wait until the timer runs under three minutes.

Jumping Flash! 2 has more of a storyline this time. After each level plays a short CGI scene where Captain Kabuki makes a rabbit pun and Baron Aloha complains. Like before, there is an extra post-game, however, the developers upped the ante. The extra game has a new subtitle “Two faces of Baron Aloha,” with new CGI cut-scenes between the Worlds, which is an impressive amount of effort. 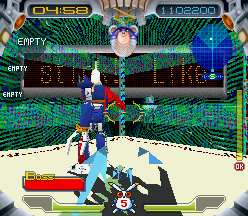 It’s not a bad game at all. But it suffers from sequelitis, the problem of diminishing returns. If Jumping Flash! is a game that is just on the verge of greatness, then Jumping Flash! 2 is two steps below greatness.