In the early 1990s Sunsoft was at its best, developing many fine platformers, several of which were even licensed properties. Its Batman games were almost all excellent, especially the Game Boy release, which combined Mario-style platforms and blockbusting with gunplay. Much of Sunsoft’s NES catalogue is also fondly remembered, with titles such as Blaster Master, Journey to Silius and, despite its obscene difficulty, Mr. Gimmick / Gimmick! to name a few. Trip World for the Game Boy is another Sunsoft goodie, regularly featuring on lists for obscure or overlooked games and, in the US at least, lists for import exclusives. Released only in Japan and Europe in small quantities, a boxed copy of the original cartridge now sells for ludicrously high prices.

Trip World at first appears to be like any conventional platformer – perhaps a little too conventional. There’s an intro showing the Maita Flower from atop Mount Dubious being stolen from an elderly Shabubu who is also kidnapped (a bunny-like creature not to be confused with the culinary shabu-shabu dish). Cue the old creature’s grandson, Yacopu, to venture out, save his grandfather and retrieve the flower, thereby bringing peace back to the world. 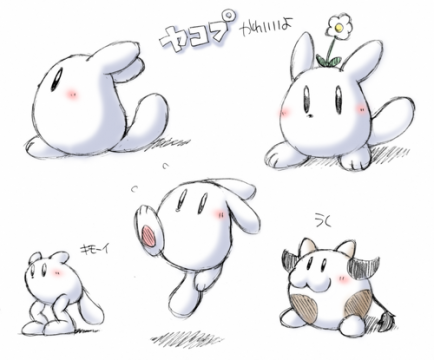 Players move across the screen, avoiding spike pits, jumping along collapsing platforms, and karate kicking enemies… Except the enemies don’t seem to fight back. Very few of them in fact cause any damage at all, with only the bosses posing a genuine threat. Apart from the harmless enemies, it’s all very standard. Yacopu can collect fruit items which imbue him with special powers: the ability to fire paralyzing seeds that sprout from the skulls of enemies; a bouncy ball power-up; and a third which allows him to attack with his tail. These powers are timed and soon wear off, but in some stages it’s possible to collect an additional power-up which, when combined with the first, grants something entirely new. The best of which causes Yacopu to sprout legs and gain the ability to fire instant-death projectiles.

Many sources try to emphasize a connection between Trip World and Sunsoft’s earlier Mr. Gimmick for the NES. This is unwarranted though. If there is a connection, it’s tenuous at best. Both games feature a cute styling, and they do have some similar visuals in places: the first stage of Gimmick! has some castle sprite-tiles which vaguely resemble the final level in Trip World, there’s a single instance of an enemy in Trip World which sort of resembles a bird in Gimmick!, and a couple of random enemies in Gimmick! also kind of resemble characters in Trip World.

Otherwise both games are functionally very different. Trip World features a distinct transformation mechanic, allowing the main character to switch between a fish and helicopter-type creature, while the hero of Gimmick can charge and shoot stars to attack enemies, along with rebounding them off walls and using them as makeshift platforms (easier said than done). Gimmick! is also maliciously difficult, even for a NES game, with some very slippery physics and painful platform locations, whereas outside of bosses there’s no challenge in Trip World at all. You don’t even need to play through the stages, since tapping the Select button at the title screen brings up a level-select menu. The two games were also developed by entirely different teams, with only Tomomi Sakai, designer on Gimmick!, being credited as “advisor” on Trip World. Toshihiko Narita meanwhile, chief designer on Trip World, is credited with special thanks on Gimmick!.

It’s difficult to criticize Trip World, since it doesn’t actually do anything wrong – it quite justifiably warrants inclusion on lists of cool, overlooked and import exclusive games. It also has some of the best visuals on the monochrome GB, alongside vertical shoot-em-up ZAS by T&E Soft, and some great music, as you’d expect from Sunsoft. The visuals really do need special mention, since there’s a tremendous amount of single-use animations for enemies. Most creatures and backgrounds are encountered only once, and only briefly, lending the game a perceived quality.

The problem is, Trip World barely qualifies as a “game”, at least in the traditional sense. There’s just not much gameplay to it. Which sounds harsh, and will be met with derision from collectors and GB enthusiasts, but the levels come across as being akin to tech demos. They look really nice as you walk through them, seeing the unique single-instance sprites and characters, but that’s it. You can kick the owl off the bridge in the first level, and watch the humorous animation as he falls down, but it serves little purpose, and is amusing only the first time you see it. The only challenge comes from the bosses, and even these are fairly easy apart from the last one. It’s quite possible to finish the entire game, seeing everything it has to offer, in a single hour-long sitting. A few players may get stuck on the last three bosses, fought back-to-back, but it’s not an insurmountable challenge.

A couple of levels, notably the last one, have multiple paths through them, but it doesn’t add much to what is an anemic experience. The multiple forms Yacopu can change into are never really needed, and even when you do use them, there’s no strategy to it. Yacopu can turn into a fish at will, even on land, without any penalty. So why not just allow his standard form to swim freely? The actual transforming doesn’t add anything apart from a few frames of animation. The entire game feels like it was started with the best of intentions, but development was suddenly cut short, forcing them to tie up the loose ends and put it out as is. It feels like a collection of fantastic but unfinished ideas. The fact there’s so little to Trip World isn’t even the problem, really, it’s the expectations placed on the game by being on all those “must play” lists, coupled with the high price of an original copy.

Bizarrely, the sprite frames for Yacopu were found on FDS development disks belonging to Sunsoft. This bit of trivia is courtesy of LostLevels.org. As stated by Skrybe: “These FDS images came from a set of 19 dev disks that DreamTR obtained from Sunsoft several years ago. They were dumped by rbudrick, who worked his ass off to get good copies of the things – copying a FDS disk isn’t as cut-and-dry as copying a cartridge. Although there were 19 disks, several of them had identical files on them, and several were blank. Weeding those out, we were left with the files below.”

Rbudrick added on the LostLevels forum: “I had to go through some ass-busting trickery to get these things to dump right, including weights (coins) on the felt-tipped disk arm cleaner thingy in the drive and in some cases, hundreds of runs of the disk in FDSLoader, along with inventing my own calibration techniques for very finely tuning/refurbishing a FDS drive (figuring out with a micrometer the exact spacing of the disk head). In some cases, I think I had to tune the drive to NON-optimal settings to get certain blocks to read.” 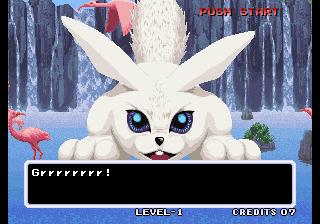 Both Yuuichi Ueda (chief director & programmer) and Toshihiko Narita (chief designer), would later work on Galaxy Fight, a 2D versus fighter, and it’s clear they had a soft spot for Yacopu, since he appears as a shape-shifting boss. 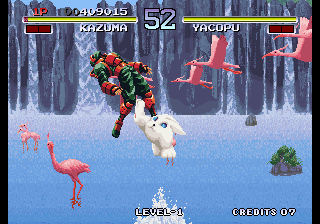