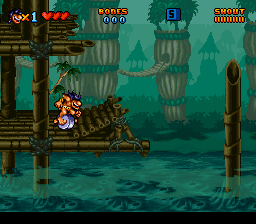 Prehistorik Man‘s console adventure (published by Kemco in Japan as P-Man) is technically a remake of the second game, but it actually expands on it on all accounts: it plays better, looks better, sounds better, it’s longer, more challenging and adds an actual plot and new characters. Simply put, it’s the best entry in the series.

Our caveman hero has been renamed Sam and is asked by the village chief to do something about the tribe’s food supply, that has been stolen by a bunch of dinosaurs. The chief remembers an ancient legend about the dinosaur graveyard, that lies beyond the frozen northern lands: since bones are the main form of currency in this primitive world, reaching that graveyard means that the tribe could buy back all the food and much more. So Sam embarks on his quest, helped by the chief himself and some of the tribe’s most important members (Hunter, Metalsmith, Inventor and the Chief’s daughter, who will become Sam’s bride if he succeeds). 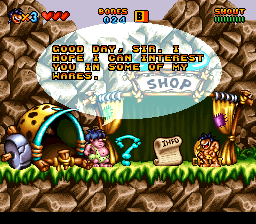 Sam will meet those characters during the levels and they will act as tutorials or brief him on the level’s objective/fetch quest (Chief, Hunter, Daughter), give him new weapons (Metalsmith) or new means of transportation (Inventor). He himself is much more agile than before, being now able to swing his club in an arc, jump higher and run on all fours to gain momentum and overcome the platforming challenges, and also has a new ability: a deadly scream that kills everything on screen but takes some time to be recharged. He’s also able to look (scroll the level) in all directions around him, to spot where he needs to go.

Most levels are huge and even more packed with alternate routes, hidden alcoves and secret bonuses; with 23 of them, it’s quite long for a platformer, but the things to see and do are varied enough that it won’t become stale. The hang-glider is back, courtesy of the Inventor, who also built a pogo stick and a mono-wheel a la B.C. from the comics: these vehicles make platforming harder but more unusual and compelling. The level progression also makes sense: after the volcanic eruption stage, Sam will traverse a giant tree on flames and a burnt forest, which leads to the hidden treetop village of the Ape-men; the last few levels are frozen wastelands, since the dinosaur graveyard is said to be located in the frosty North.

There are still all the bonuses and bonus stages from Prehistorik 2, as well as the end-level tally; this time however it’s not just for score, since getting enough points means gaining extra lives, and the game becomes challenging fast so you’ll need them. Also, the village chief will either berate or congratulate Sam after the tally depending on the percent of items collected. Unfortunately, for such a long game, there still aren’t passwords or save states: the only way to save progress (and only in some levels) is to find the Shopkeeper hidden somewhere in the levels and pay a hefty sum of bones collected from defeated enemies. However not only having to find the shop and paying it is cumbersome, but the progress is only saved in the current gaming session, meaning that you will still have to complete the whole game in a single session. The Shopkeeper also randomly sells more continues, hints on the levels’ secret areas, the opportunity to outright skip a level or funny but useless trivia about Sam’s world and its inhabitants. Just like Prehistorik 2, there are two difficulty levels, but playing on Easy will cut the game short at level 14. 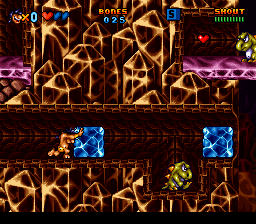 While there’s still some recycled enemy sprites, the graphics are quite clean and well illustrated, with several parallax levels and some nice effects, for example the fire and smoke or the varying luminosity in the forest stages, to give the impression of light filtering through the leaves. The giant boss sprites are nicely animated, as opposed to the stiff ones from the prequels. The soundtrack has a jazzy and relaxed feel that avoids the usual stereotyped tribal drums and percussion.

Prehistorik Man is an example of competently made platform game, which however passed almost unnoticed, mostly for two reasons: in 1995 people thought of 2D games as outdated, and it came out for a system, the SNES, which was already overloaded with fantasy platform games of all sorts, making it impossible for Sam to stand out. And those who did notice probably thought of it as a Joe & Mac rip-off, which obviously is not. 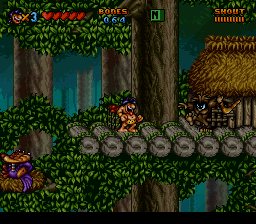 The more recent Game Boy Advance and DSiWare ports weren’t very well-received, though: the GBA one has somewhat more grainy and zoomed-in graphics, while the DS one suffers from slowdowns, imprecise hit detection, and the lower screen used to display a map of the important stuff in the levels that however is mostly useless. And the tacked-on stylus controls should be left alone. It added the opportunity to activate Sam’s screams by making noise in the DS’s microphone, though. The only real improvement is that both finally added reliable passwords. A bit of trivia: the DS port was published in Japan by ARC System Works in their “Arc Style” label under the title “ARC STYLE: Zekkyō Genshinin Sam no Daibouken”. 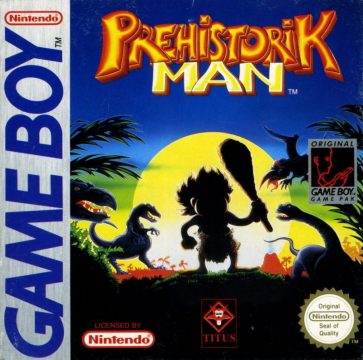 Despite the title, this Game Boy game is not a port, rather a game on its own that is mostly based on Prehistorik 2, because of the system’s technical limitations. It’s fairly dull and repetitive, with just 10 levels, and feels more like a computer than a console game, also thanks to its Amiga-esque chiptune soundtrack (apparently made on an Amstrad CPC and then converted). It has also other elements reminiscent of the computer demoscene, like the giant rotating words that appear every time you enter a door/stage or lose a life, or the level intros with Sam on the hang-glider floating above a text crawl of the level’s name in giant blocky letters.