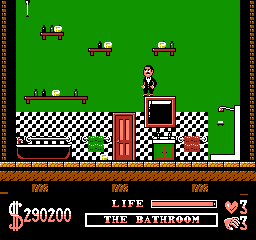 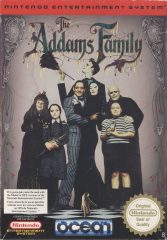 The 8-bit console version of the game, still developed by Ocean and distributed by Flying Edge, is different from the one for the 16-bit consoles and computers in that it’s less based on platforming challenges and more of a Metroidvania. Gomez still needs to find the other family members but this time they are not being kidnapped and there’s no bosses: they are scattered around the mansion and, after you get some items for them, will in turn give Gomez the keys to unlock the various areas that are not accessible from the start. You even need to find the key to open the mansion’s front door! The final goal of the game is still to rescue Morticia, who is still being locked in the Addams’ vault. The way to do so is to find everyone and collect all the loot (such as money bags, gold bars, diamonds etc.) in order to reach the sum of a million dollars, to open the vault’s door and fight the underwhelming final bosses (Tully Alford with his wife).

Gomez starts with five lives and also has a life bar, that however can get drained pretty fast, and the only way to replenish it is to eat the few slices of cartoon cheese (?) found here and there. Cheese and 1-ups are the only collectibles he’ll ever find besides Thing (that acts as a temporary shield), the loot and the items needed to complete the game, for example Lurch’s music sheets, a shrinking potion to get Pugsley unstuck and a wrench that will be used by Grandma (not Fester?) to repair a fog machine (?). Overall the game is shorter than the hundreds of screens of the 16-bit one, but it seems longer because it’s not always clear what to do and where to go, not to mention that the mansion’s layout is kind of confusing: the devs chose to convey a 3-D space in a 2-D world by representing the doors that lead to other zones with the word “DOOR”, several rooms are identical just with different coloring, and the absence of a proper map does the rest. Not to mention the many inconveniently-placed spikes and enemies.

The NES port is the worst of the lot, thanks to the sub-par graphics (with horrible character portraits and the Gomez sprite looking like Nick Diamond), annoying sound effects, the theme song endlessly repeated as the only BGM, and above all the floaty controls and poor collision detection that make playing a chore. The Master System version is slightly better, but still pretty mediocre and frustrating, while the Game Gear one is more or less the same as the SMS one but with a more zoomed-in view thanks to the small dimensions of the portable console’s screen, thus making exploration an even bigger chore.

The porting for the 8-bit computers is somewhat of a hybrid of the 8-bit Metroidvania game and the Game Boy platformer version, in that there’s still the need to go around and find the keys to the various areas, but the environments and the enemy sprites are more similar to the Game Boy game, plus there’s no money items to collect. It’s also barely playable by today’s standards.

It looks and plays like a mid-80s game rather than an early 90s one: the whole game is composed of flip-scrolling single screens, the gameplay is based on avoiding obstacles and the graphics, while colorful, are mediocre and confusing. This porting also has a fairly ugly portrait of the whole family on the title screen, something that isn’t found in the other versions. Other than the main theme on the title screen, there’s mostly (see below) no music outside of the enemies’ grating sound effects.

The main problem is that it is too difficult to the point of frustration: pixel-perfect positioning and memorization to navigate the traps, combined with the slippery controls common to all the incarnations of this title, does not a good game make. It is also hard to understand what is part of the scenery, what is an item or an obstacle. Most likely because of the systems’ limitations, whenever you find a family member you don’t have to face a boss, but Gomez is transported to a new screen where he has to “simply” survive various traps until the countdown that appears gets to zero. For example, you’ll have to try not drowning in quicksand while avoiding moving sparks.

The C64 and Amstrad CPC versions are almost identical, only that the latter adds a jingle whenever you find a family member and Gomez looks like a grinning doofus. Surprisingly, the best of the bunch is the ZX Spectrum one that has fluid animation for Gomez, more clear and varied sprites for enemies and obstacles, a catchy rendition of one of the 16-bit version’s tunes that can be heard during the intro (which gives vague info about the characters’ placement) and during the 60-second challenges, which also have a huge portrait of the person to be rescued in the background, a thing that wasn’t present in the other versions. It also has an ever-changing portrait on the left of the status bar. 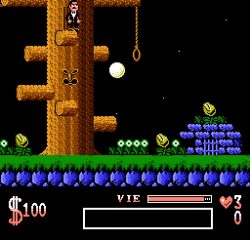 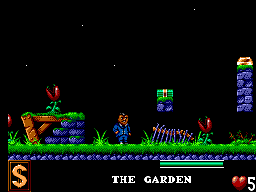 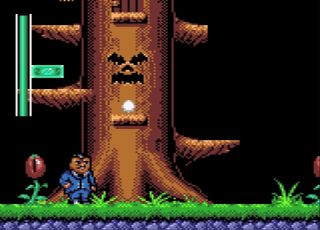 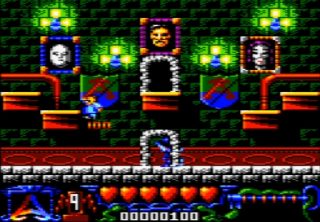 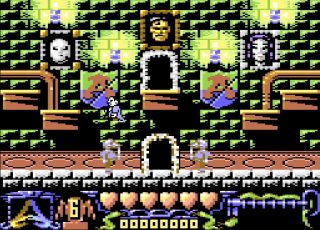 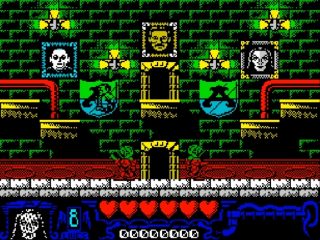