As it was common to most video games based on franchises in the early Nineties, the Addams Family video game is a platformer with loads of stuff to pick up and hundreds of enemies to jump on. It was developed by Ocean, the software house responsible of several other film-to-game adaptations of pretty low quality. In this case however, the result is a decent Euro-style platformer, which is at least playable if unoriginal and really difficult.

Gomez has to explore his mansion that turned into the hub of a sprawling world, in order to find and rescue the other family members who were kidnapped by Tully Alford, the family’s crooked lawyer introduced in the movie, and guarded by various monsters. The areas can be chosen in any order, defeating the bosses and saving each character gives us a password and a life extension, and saving them all will eventually open the final cavern area under the mansion, where the famed Addams treasure vault is hidden and where Morticia is being imprisoned.

Not only the Gomez sprite looks vaguely like a dapper Mario, the general gameplay is kind of similar to Mario games too: the Addams patriarch has to jump on the heads of enemies and occasionally pick up 1-Ups, icons that make him invincible or balls that let him throw projectiles a la Fire Flower, sneakers to go faster, and a fez that lets him fly for a while. He too collect tons of money (“$” icons) to rack up extra lives. He also can bash switches with his head to get hints, open up secret areas or make walls and other obstacles disappear. The only thing that puts him above Nintendo’s plumber is that he can pick up his fencing sword to skewer enemies. Speaking of enemies, they are more “kooky” than “spooky”, including things such as walking teapots and fishbowls, monkeys on unicycles, armless goblins, rabbits with spiky collars, penguins, floating yogis and clowns inspired by Tim Curry’s IT/Pennywise. The bosses are giant folklore creatures (a goblin, a witch…) with the final enemy being a gavel-throwing judge for some reason.

However, the game is not as polished as the Japanese titles mentioned above: Gomez moves in a slippery way, with too much momentum, and the collision detection is not always up to par, making the game even more unnecessarily difficult, with all the spikes and traps everywhere. The devs probably realized this and hid a lot of secret areas and invisible doors that lead to a huge amount of money, extra lives and items to make the ordeal somewhat more manageable.

The general design is quite clearly European, with every area having its own descriptive name on top of the screen (just like in many micro-computer games of the 80s), and with most zones consisting in either flip-scrolling short areas, huge maze-like areas with both horizontal and vertical scrolling or auto-scrolling obstacle courses like Gomez’s toy train tracks (one of the few nods to the film and the general franchise) and the gondola in the caves at the end. Graphics are typical of European games as well, with small but detailed sprites and equally detailed but repetitive backgrounds. The music tracks by Jonathan Dunn are quite nice and perfectly capture that feeling of harmless Halloween horror that the franchise’s main theme exemplifies so well.

The Genesis version that came together with the SNES one is more or less identical, while the Amiga one is kind of botched: it is missing the intro after the title screen and has nice scrolling but poorer graphics, with the backgrounds replaced by pitch black darkness, and also doesn’t have the names on top of the screen but only the point scores. The Atari ST one retains the backgrounds, but not the level names, the scoring points are at the bottom of the screen, but has the lives and energy indicators on a black bar on the left of the screen, thus having a slightly more cramped play area. However, the flip scrolling makes everything even harder.

The Game Boy version deserves a more in-depth mention, because it is a fundamentally different game: the basic concept is the same, finding the other family members while exploring the manor, but the gameplay underwent some changes. For starters, Gomez (whose sprite looks more like Oliver Hardy, to be honest) doesn’t defeat enemies by jumping on them, that merely stuns them, but rather by throwing knives. Because of the system’s limitations, the zones are much shorter, emptier and more linear as opposed to the infernal mazes of the 16-bit versions, full of baddies and traps, and there’s no points collectibles: the only items are vials that replenish the current weapon’s gauge, hearts for health and potions that turn Gomez into different personalities, such as a fish-man in order to swim underwater.

Freeing every family member grants us a different weapon from icicles to fireballs and blocks, and some of these can be used as tools to advance in the areas. This also means that the various areas can’t be tackled in any order you want, since some of them can only be opened after defeating certain bosses and/or obtaining certain items. Said bosses are different (including a giant squid, a huge teddy bear with a mace and an amnesiac Fester), the music is different, the enemies are mostly generic “creepy” critters and their sprites have a cutesy “Japanese” quality to them (also some elements of the scenery look gigantic if compared to enemies and Gomez, making them look almost super deformed), and the whole game is way easier and more linear than the other versions: if you know what to do and where to go it can be completed in about 20 minutes. 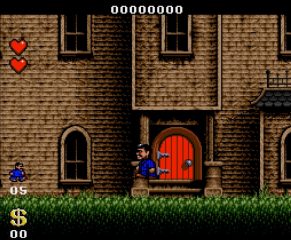 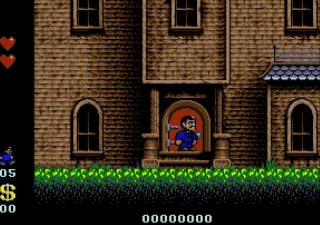 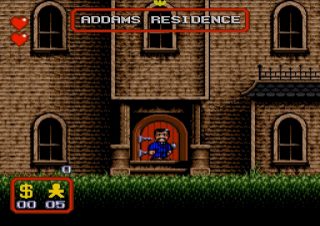