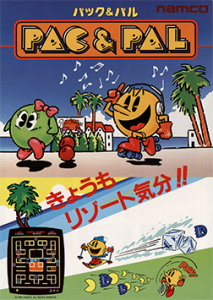 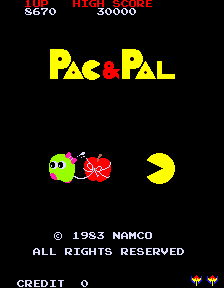 Despite the rather tepid reception Super Pac-Man got in arcades, Namco would see fit to release another sequel the following year. Instead of dialing back the new mechanics that set Super so far apart from its prequels, however, Namco would double down, changing up the usual Pac-Man formula even more. Sadly, Pac & Pal’s originality might also have contributed somewhat to its obscurity, a far cry from the multitude of ports previous games would receive. This particular rendition of the classic maze game remains one of the most forgotten in Namco’s lineup. It’s still a fine game on its own, however, and worth seeking out if you’ve grown sick of the more traditional Pac-Man experience.

To clear each maze, Pac-Man has to eat all the items scattered across the board. However, all of the food items are held behind gates, much like in Super Pac-Man. To open these gates, you’ll need to move over the cards scattered around the maze to flip them, with each one removing the gates around the item depicted. With each card flipped, the associated item will flash, and only three items can be flashing at one time. This means you can’t simply flip all the cards in one run, which makes things somewhat more difficult. Each maze also has a different card layout, meaning that some memorization will be required if you want to go for certain items first.

Complicating matters further is the addition of Miru, the eponymous “Pal”. A bow-clad creature that’s neither Pac nor ghost, Miru wanders the maze, picking up any items she can get a hold of. Once she has an item, she’ll attempt to carry it into the ghost pen, where it’ll disappear. The good news is that this still counts as far as clearing the level is concerned, but you won’t score the points you would have gotten if you had grabbed it. This adds a new question you have to consider as you play; do you let Miru do her thing at the loss of score, or do you risk getting caught trying to chase her down? 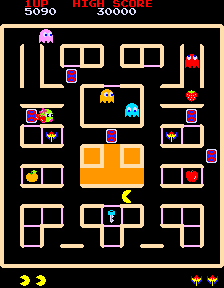 Finally, power pellets as we’ve previously known them are no more, instead replaced by two power items placed somewhere in the maze. When you pick one of these up, Pac-Man will turn blue, indicating you can now press a button to have him fire out a breath ray. Any ghosts hit by this will freeze in place and turn harmless for a time, as well as scoring you the points you would have previously gotten for chomping them. Not only do these power items last a lot longer than the pellets, but Pac-Man’s deadly breath will even shoot through walls, making it far easier to take down the ghosts. Pac-Man himself isn’t invulnerable even under their effect, however, and it’s very possible for Miru to snatch these up, as well. At times, it almost seems like she goes after them even more than the rest of items. 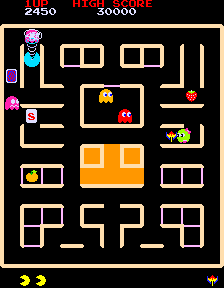 The maze itself has also had a few tweaks. No warp tunnels means it’s easier for an unprepared Pac-Man to be cornered. Of more dubious use is the opaque area in the bottom center, where Pac-Man will disappear from view if he enters. The ghosts can enter it too, but don’t move quite as quickly while they’re in there, given you a chance to slip away from them. The intermissions are also missing, with a quick bonus round taking their place every couple of mazes. You’re given an assortment of cards to flip, with some giving you bonus points, and one always hiding a round-ending ghost. These are generally nothing but luck, and there’ll be many a time when the ghost is the first card you’ll end up flipping. 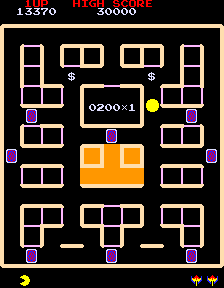 The overall experience is only similar to past games on a very basic level, but it makes for a unique experience that stands well on its own merits. It also makes for a much more challenging game, and thankfully not for any reasons like faster ghosts or invisible mazes. The game asks you to keep track of far more at once, from which cards open what, to what Miru’s currently attempting to steal away from you. Truthfully, the emphasis on memorization does harm the game somewhat, as it somewhat betrays the immediately clear, pick up and play nature that previous games handled so well. When you’re playing for the high score, however, Miru adds in an element of risk and reward that they never had quite as much of, either. 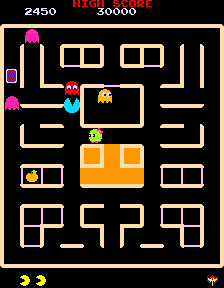 The graphics, while not a massive upgrade of those seen in Super, have some nice touches. Miru, for as simplistic of a design as she is, is cute enough, even if her design clashes somewhat with the classic sprites. The power items also change appearance every so often, and with them, their effect. Pac-Man can fire off a Galaga-style tractor beam, fire out smoke with the car from Rally-X, freeze them in place with the snowman, among others. It’s a nice  visual touch that helps encourage you to play further, which makes up somewhat for the loss of intermissions. For the first time in the series, Pac & Pal features a music track that plays over the game, a soft, generally pleasant tune that isn’t terribly long, but doesn’t ever get truly repetitive.

Overall, Pac & Pal is an exceptionally different game from its preceding sequels, and not everyone may be able to handle its changes. On its own merits, though, it’s a fun game that’s worth trying, even if its new features add in somewhat too much complexity. Sadly, this would be the last time Namco would ever experiment quite this much with their well-used maze game formula. While Pac-Man would soon move into new genres entirely, later maze games would choose to play it safe. Experimentation like this would never be seen in the series again.

Sadly, the game never even received a single port during its heyday, not even to the most obscure of European microcomputers. This was most likely due to its extremely limited Western release, where only about 300 machines reached Europe. This European version was retitled “Pac-Man & Chomp-Chomp”, and replaces Miru with Pac-Man’s pet dog from the 1983 animated series. Even among Namco’s many modern compilations, Pac & Pal ended up on Namco Museum Remix and Namco Museum Megamix, both only for the Nintendo Wii, and Pac-Man Museum for Windows, PlayStation 3, and Xbox 360. 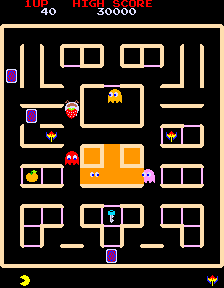