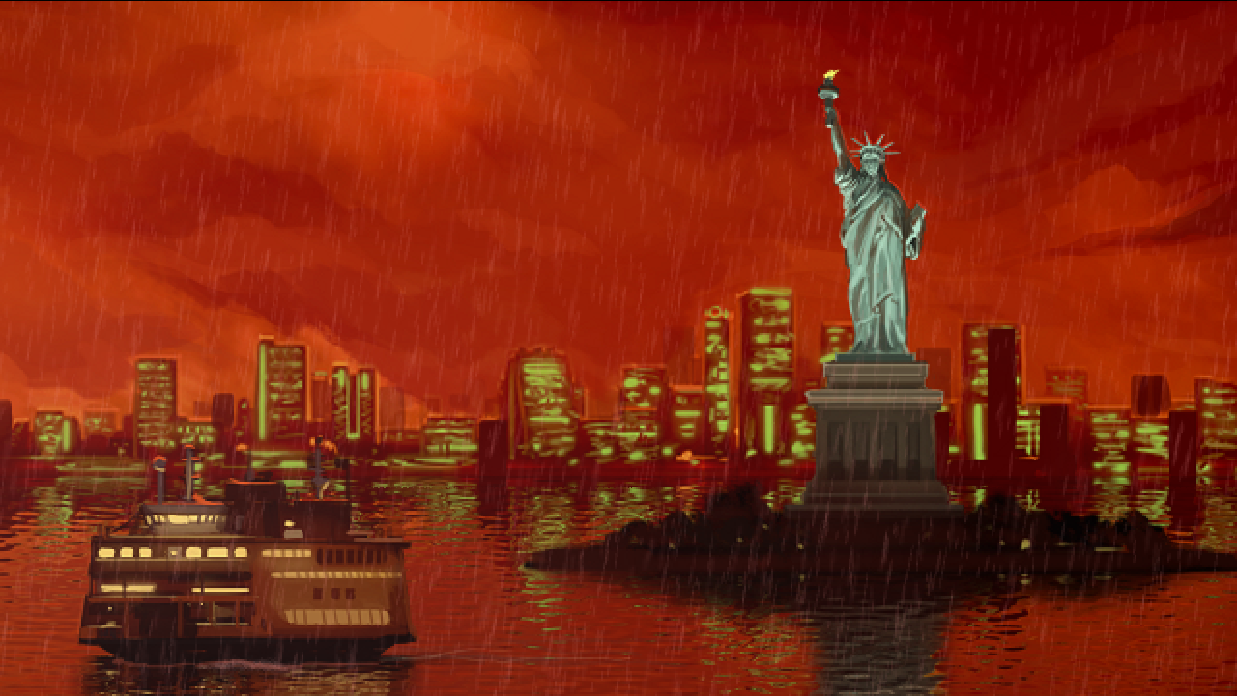 It’s been four years since Dave Gilbert last directed a game with the fantastic Blackwell Epiphany. Since, Wadjet Eye has helped produce three of the best point and click adventure games in the past decade, plus some of the studio talent has helped out on projects like Kathy Rain and The Charnel House Trilogy. They’ve been busy, but Gilbert hasn’t touched his Blackwell universe in quite some time. That finally changed with Unavowed, another entry in his connected New York stories and a sort of spiritual successor to what came before. The big difference this time is that The Shivah wanted you to think and reflect, and Blackwell wanted to tug at your heart strings. Unavowed changes the tone, and despite introducing some of the darkest elements and largest stakes in his entire library, it ultimately wants to leave you smiling. It also tries to introduce RPG elements into the tried and true point and click formula, and it works. 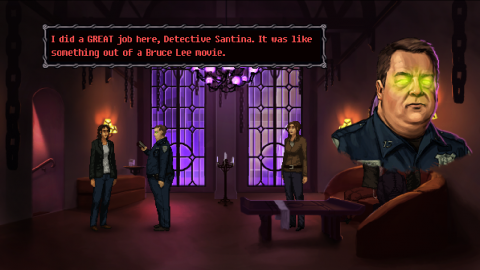 The game starts with an exorcism, as you are asked questions to define your player character, including gender, name, and one of three professions. You play through a flashback that shows how a demon possessed you, changing with the profession you picked, and then are freed of the demon in present time. You’ve been out of it for one year, and due to being wanted for your demon’s many murders, you are recruited into the Unavowed, secret guardians of New York City who deal with the supernatural. From there, you work with the team to solve cases and discover the plans of your demon, who managed to sneak away during the exorcism. Your team includes… 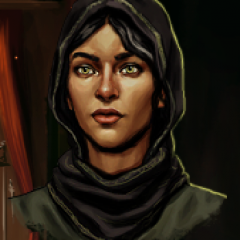 Mandana – The most senior field agent, a half-human, half-genie warrior who uses her pirate mother’s sword skills and physical ability on the field. Very goal focused but collected and sides with decisions that preserve the norm or help wronged supernatural beings. 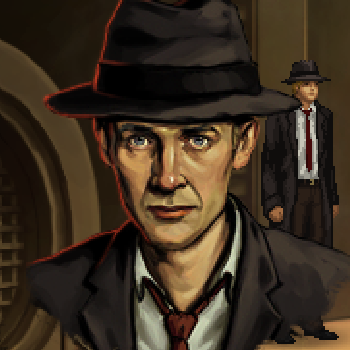 Eli – The second most senior field agent, a fire mage with incredible destructive power, plus a nifty trick that lets him read burned documents. He’s very emotional, deeply believing in the importance of family and values the humanity of himself and others, trying to keep everyone anchored. 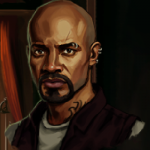 Logan – A spirit medium and recovering alcoholic. He joins after a case in the Bronx and is the most level headed and empathetic member, making him perfect for conversing with ghosts. Your character knows him beforehand if they were a bartender, and his spirit guide is Kaykay, the little girl Joey and Rosa helped move on in Blackwell Epiphany. 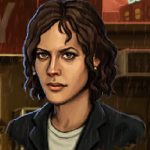 Vicki – A detective who survived a mass shooting and ended up joining the team upon helping solve a case on Staten Island. She’s the most blunt and direct member, able to help converse with cops due to her cop family experiences and uses her firearm when you need something opened. She was your character’s former partner if they were a cop. 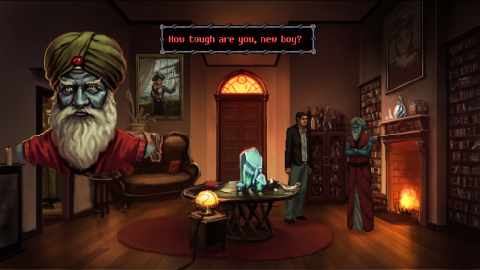 Unavowed‘s story is a strong one, which is to be expected with Gilbert’s strong handling of character. Not only does every single character, even the most minor, ooze personality, everyone with significance in the story has a thematic reason for being there and what they represent. Mandala and Logan both value progressive action and widening perspective within ethical limits, while Eli and Vicki place more faith in family bonds and keeping one’s feet directly in the present to deal with the current problem. Everyone has disagreements and makes interesting points in every situation, but everyone on the team ends up being good people at the core and represent the best possible versions of their own identities, even if they struggle with their own sense of self in the process. They’re easy to connect with because every one of them has a deeply relatable aspect to their core inner conflict, brought out strongly during the end of the Brooklyn case with whoever you brought along for it.

The game also has moral choices at the end of every case, and they’re surprisingly difficult decisions to make. Where most games default into clearly good and bad, Gilbert has written a series of complicated situations filled with parties who bleed into a questionable gray. The right and wrong choices ultimately come down to understanding the main themes of justice and responsibility, and even then some will make you freeze up. None of these situations have completely rosy outcomes, giving the fantastical adventure an anchor to reality. It doesn’t back away from human ugliness, but it doesn’t wallow in it either, finding a solid balance that grips and entertains. 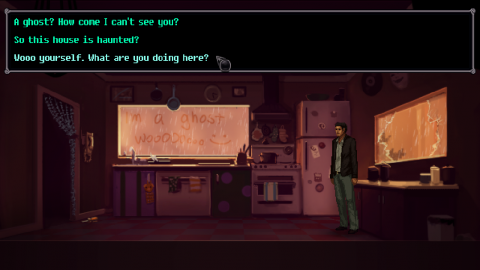 Being another great Dave Gilbert story would have been enough to sell the game, but Unavowed was in development for so long seemingly because of its design changes. The game takes from role playing games with its party system, letting you take two of your team into the field with you every case. The case structure allows the game to split itself into contained areas with their own mysteries, and once you’re in, you’re stuck with whoever you brought. From there, you can use your partners from the inventory, and dialog with other people changes based on who you brought along.

The game takes this into account with multiple possible routes in your investigation and multiple solutions to puzzles, which manages to encourage doing multiple ones, a rarity for the genre. The story and scene changes with your profession and case end choice outcomes just adds to this, making possibly the most involved game in the Wadjet Eye library. Said puzzles aren’t terribly difficult, mind you (though one password clue in the Wall Street case will trip you up I you overthink it), but they serve well to keep the pace going. There are also a few shake up bits to keep things interesting, with the Chinatown case having one of the coolest and most entertaining puzzles of all of Gilbert’s directed works. 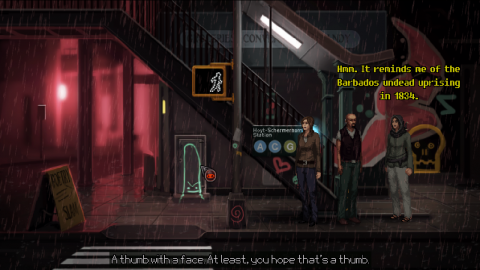 Special mention also must be made to Ben Chandler and Ivan Ulyanov, both long time regulars with the studio doing some of the best work in their careers so far. While there’s no Shardlight level stand out screen from Chandler this time around, he manages to put out some very detailed and absorbing scenes that take advantage of the urban fantasy angle, ranging from ice islands in the sky to monster sprites far larger than any human character. Ulyanov, on the other hand, continues to create exaggerated realist and expressive character portraits, giving everyone a very distinct presence the moment you see their face. The strong voice cast only adds to the effect, with Frank Todaro, Arielle Siegel, and Dave Gilbert himself standing out as Eli, Vicki, and one spoiler character. It would also be a crime not to mention SungWon Cho as Kalash, the head of the New York City branch of the Unavowed. Who knew the guy internet famous for making funny short videos making fun of anime and video game fans would be able to change his voice so much and so convincingly.

The game’s only significant shortcomings are the same ones shared with the Blackwell series. There’s not really a stand out puzzle in any of them, but it hardly matters in the long run. Gilbert’s strength as a designer isn’t challenging you with solving problems, but following leads and collecting information. It works well here as it always has, made a bit fresher with the party system, and results in a streamlined story that doesn’t overstay its welcome. It’s difficult to say where Unavowed stands against other Wadjet Eye releases like Technobabylon and Shardlight, but it’s certainly the best overall of Gilbert’s directed works. It tries to do new things within its genre, and it has one of the most brilliant twists in the past decade of indie gaming, yet builds on a safe foundation that has served the studio well. Definitely one of the best they’ve ever made, and well worth your time.