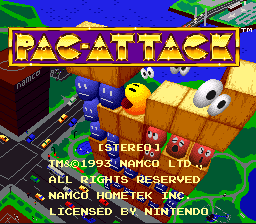 One of the greatest signs of success when you’re comparing video game mascots is just how many spinoffs they’ve had. All the greatest mascots will have a kart racer, party game, or puzzle games somewhere in their history. Pac-Man, possibly the greatest video game mascot of all, obviously has all three. Pac-Attack is hardly the most inspired or the most recommendable when it comes to the falling block genre, but it’s serviceable. It’s no Tetris, or truthfully, even a Klax, but it’s far from offensive.

Calling it a quick cash-in wouldn’t be far from the truth, as the game actually started life as a 1992 arcade game called Cosmo Gang: The Puzzle. The arcade game itself was a spinoff of a series of mechanical redemption games released by Namco, which only had a small presence in North America. In 1993, the game was released to American consoles with a Pac-Man reskin, with the Japanese release taking its original Cosmo Gang form. Aside from the changes in graphics and sound, however, the two games are mostly identical in gameplay.

The game’s main mode asks you to gather as high of a score as you can before your field fills up entirely with objects, much like in Tetris. You’re constantly given sets of three objects, each of which can contain one of three things. Wooden blocks disappear when you make a whole row of them, with more lines earning you more points. Ghosts can’t be cleared once placed however, unless you place a Pac-Man icon somewhere on the field. It’s Pac-Man himself that adds the biggest wrinkle to the proceedings, and knowing how to use him is where most of the game’s strategy comes in. He’ll generally try to move towards the bottom of the screen, disappearing if he can no longer move, but he’ll also turn if he hits a wall, meaning sometimes you’ll have to make ‘pathways’ for him to reach the ghosts you want to remove. 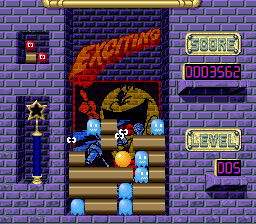 In typical falling block game fashion, the game keeps picking up speed the further you go, until you only have a split second to decide where to place things. The only mercy you’re given is a fairy that sometimes appears that’ll destroy all the ghosts beneath her once you place her. On the easiest difficulty level, you’re given one of these for free when you’re in trouble, while on harder levels, you’ll have to destroy enough ghosts to fill a meter first. There’s little else to the main gameplay beyond that, with the only real change being the gradual increase in speed. 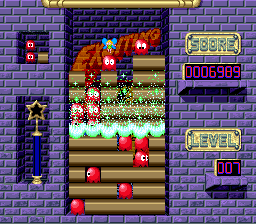 There’s also a puzzle mode that takes place over a hundred stages, where you’re given a partially filled board, a number of ghosts, and a limited number of Pac-Men to clear them all. Not only do you have to get rid of all the ghosts that you’re already shown, however, but you’ll also be given more to place onto the field. It can be tough even from the early stages figuring out where to place Pac-Man so he can actually reach the ghosts, so this helps to add a lot more replay value than the somewhat simplistic main mode. There’s also a versus mode for two players, in which the ghosts you clear send more towards your opponent to hassle them. It’s fun for a round or two, but the best two out of three matches take so long to play out that it quickly starts to get a little dull. 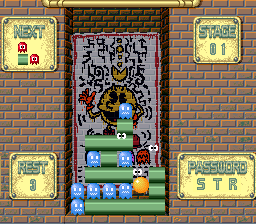 Overall, there’s not really terribly much to recommend Pac-Attack over the games it’s trying to imitate so hard. The only thing that really helps distinguish it is the puzzle mode, which, while challenging enough, only adds so much replay value. There’s nothing the game really does wrong, but against games like Dr. Robotnik’s Mean Bean Machine and Dr. Mario, there’s a lot less on offer.

The Super Nintendo and Genesis versions are nearly identical, aside from having a different menu screen, for some reason. The Game Boy & Game Gear versions are solid handheld ports, with the only real change being the forgivable omission of the versus mode. The game can also be found as a bonus feature on Game Boy Color’s Pac-Man: Special Color Edition, which is a colorized but no-frills port of the Game Boy version. The CD-i version, released only in Europe, features new art that replaces almost all of what little text the original game had. It appears on assorted compilations, including Namco Anthology Vol. 2 for the PlayStation. 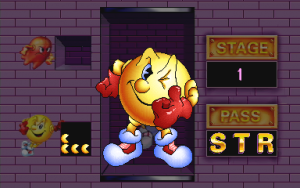 It’s not really an improvement. 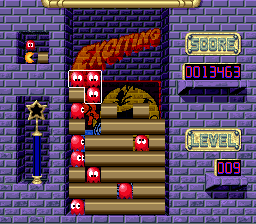 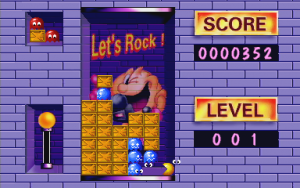 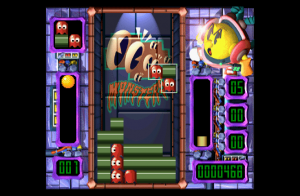