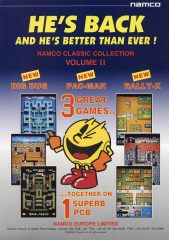 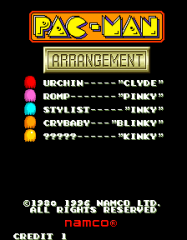 Namco, for any faults they might have, rarely gives up on their classic franchises, no longer how long it’s been since their heyday. By this point during the late 90s, they had already firmly established themselves with games like Tekken 2 and Ridge Racer. Despite the money they had been making hand over fist with games like this, they saw fit to make a new revision of three of their classic arcade titles. Pac-Man, of course, was one of them, and this update does decently well at keeping what kept the original a classic while keeping it from getting too stale.

Standard Pac-Man rules and mechanics apply; eat all the dots in the maze, don’t get killed by ghosts, and eat power pellets to eat ghosts. To add onto the basics, however, there’s an assortment of new mechanics to help and hinder your progress. For starters, you can now play the game co-op, which makes clearing the maze a little easier. You’ll find new powerups like a speed increase, one that makes a shadow copy of Pac-Man to help you eat up dots, and a pot that sends all the ghosts back to the center of the maze for a short while, among others. You’ll also find dash panels that let you quickly chomp down a row of dots while dashing right through ghosts, along with jump pads that teleport you around the board. 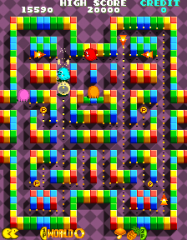 Making things more difficult is the addition of a new ghost with the rather concerning name of “Kinky”. Kinky isn’t dangerous on his own, as he spawns in a vulnerable state and will grant you the effects of a power pellet when you eat him. However, he can touch one of the other ghosts to combine with them, creating a super ghost with new abilities. With Blinky, he’ll charge down horizontal paths with incredible speed, Clyde lets him place down new dots, Pinky lets him leap around the maze at will, and Inky creates a shadow copy of himself that’s just as dangerous. If you can eat a super ghost while you’re using a power pellet, however, you’ll earn double the points you normally would. 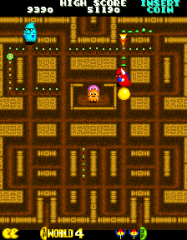 There’s a total of 23 mazes to get through, although you’ll probably have seen all the new features by the sixth of them. The game does constantly vary up the layouts and designs with each of the mazes, however, and the game isn’t long enough for it to get stale. At the end of the game, there’s even a boss fight of some fashion, where you’ll have to grab all the dots while avoiding a giant mecha-ghost. The core gameplay remains the same while you’re doing this, but it adds a nice bit of variety to cap the game off. The fact that the game offers unlimited continues means that anybody can see the ending, with enough effort, although your score will definitely suffer for it. 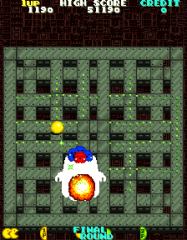 It makes for a far more chaotic experience overall, one where the ghosts are constantly doing enough crazy things that it tends to cancel out whatever advantages you can get. Even though the game runs out of fresh ideas fairly quickly, what it does have is enough to float the game for the half hour or so it takes to finish. It’s a fun game while it lasts, never growing stale, while staying just long enough to make going for the highest scores a real challenge. Trying to clear the game on one credit will definitely take some time, as even by the early levels, the ghosts get so aggressive that even finishing a single maze on a single quarter can prove to be quite difficult. 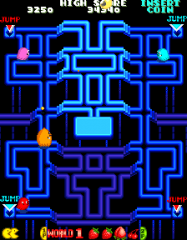 The graphics, while far from cutting-edge, have been updated enough to be satisfactory for 1996, with smooth animation and plenty of variety in the mazes. The music, however, is generally forgettable. Overall, for as many people have attempted to ‘update’ Pac-Man, Namco’s official try at it is a solid game that’s worth playing if you’re a fan of the series.

The game received a rerelease for Namco Museum on the PS2, XBOX, and Nintendo Gamecube. It was also included in Pac-Man Collection for Game Boy Advance. The GBA version is fairly accurate, but features the music in a lower bit-rate, as well as a scrolling maze. 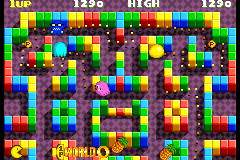