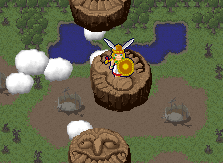 The Valkyrie series may have started with the Famicom action RPG, but its claim to fame was the excellent arcade game, Legend of Valkyrie. It may look like an RPG, but it’s really an action-adventure in the vein of Wonder Boy in Monster Land, combined with the frantic shooter action of a run-and-gun like Mercs. 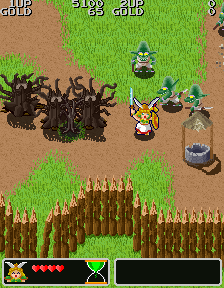 As the fair haired warrior maiden, it’s up to you to reclaim the Golden Seed stolen by the evil Kamooz. Two players can join in, as either Valkyrie or her green lizard friend Xandra. Valkyrie wields a sword while Xandra fights with a trident, but the difference is merely aesthetical, and they play identically. The default weapon fires out a ranged attack, which isn’t terribly powerful, but sure is a nice step up from the near-useless swords of the Famicom game. 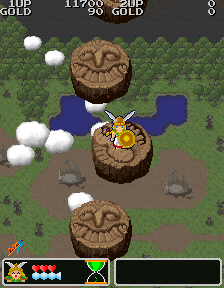 In addition to slaying hordes of bad guys, you’ll have to do a fair bit of platforming. It’s a little bit difficult given the overhead perspective, plus the fact that your jumps are a little hard to control, but falling just deducts from your health as opposed to killing you outright. Most impressive are the scaling effects – as you climb the mountain in the first stage, you see the ground shrink in the distance, giving a nifty illusion of depth. Later in the game, you’ll find a catapult that slings you across the entire stage, giving a bird’s eye view of the level. One of the bosses, a fire scorpion, is so  huge that the game has to zoom out just so you can see it. This is all pretty incredible for a game from 1989.

The Legend of Valkyrie isn’t just pure action though, and the RPG elements are what really make the game unique. You’ll run into a variety of colorful characters who will give you gameplay advice and occasionally reward you with stuff. Alas, not every person is just willing to give away items. Fallen bad guys will drop gold, which allows you to buy a variety of weapons from shopkeepers. Each weapon has limited ammunition, though the game doesn’t display the remaining uses. You can stock up several weapons, so they’re automatically replaced when they run out, though you can only buy one item per shopkeeper, so you can’t become too overpowered. 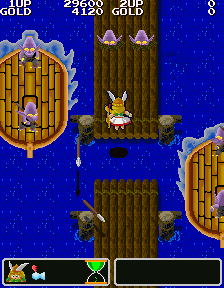 Other than assorted projectile weapons – three way blades, homing fireballs, bombs – you also have several magic spells, which allow you to summon mini-Valkyrie as Options, turn Valkyrie into a giant so her jumps create mini-quakes, or create an explosion to clear the screen of enemies. Once again, there are no free handouts – each spell is only found once, and they’re easy to miss. Each level usually has more than one path, and if you just take the quickest route through each level, you’re bound to miss all of the spells, plus miss a lot of potential cash and other power-ups, like items that permanently extend your health or magic meters. However, you’re still restricted to an extent – you can’t backtrack past certain points, plus there’s a timer which will drain your health if you dawdle. It’s only through several replays and looking for hidden areas can you find everything.

The first half of the game is fairly easy, as you’re given loads of extra weapons and plenty of cash. But shopkeepers become scarce in the later areas of the game, and also charge an exorbitant amount of money. Health replenishment are almost non-existent too. They’re also flooded with enemies, or have gigantic bosses which are difficult to dodge effectively. To be fair, you’re always equipped with the clone spell, and you can summon several of them at one time, so you’re never completely overwhelmed. In the arcade and PS1 versions you can immediately resurrect where you left off, or continue from the beginning of the level to rebuild your cash stock. 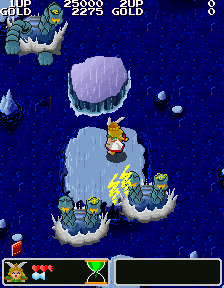 Still, even in its roughest moments, it’s quite a charming game. The protagonists never speak, but the illustrations between levels are fun, as are the portraits on the high screen. The NPC dialogue is limited, but it still presents a unique and strange fantasy world. One of the later “bosses” is a gigantic elephant that challenges you to either a test of brain or brawn. You need to fight if you pick brawn, but pick brain and you need to complete a sliding tile puzzle. The characters are distinct enough that it’s easy to see now Namco was able to develop both them and the world in later games. The upbeat main theme perfectly complements this too, though it does get played too often. The soundtrack was composed by Hiroyuki Kawada.

The PlayStation version, on the Namco Museum Volume 5 CD, is the only way to play the game in English. Outside of some quiz questions though, the dialogue isn’t essential. It’s a straight port of the arcade game, although the playing field been shrunk to only take up about 2/3 of the screen in order to maintain its original vertically oriented resolution. You can also activate the “tate” mode so you can rotate your TV and play the game full screen. 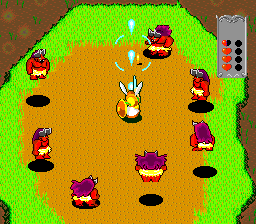 Prior to the Namco Museum CDs, the only home conversion was for the PC Engine. The graphics take a hit, although they still look okay, and the screen has been formatted for a TV rather than a vertical arcade monitor. The lack of scaling effects means that certain areas lose their sense of depth. The music suffers quite a bit too. The two player mode is gone, although Xandra and other NPCs show up more often to give extra items, and there are a few new subquests to get extra items. The health and magic meters are now extended by your score rather than finding items. You also need to answer quiz questions to get new magic. 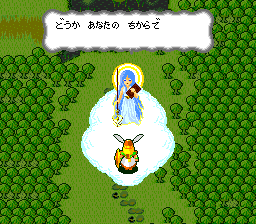 The magic spells have been altered – the clone spell is gone and instead you summon a Vakyrie duplicate for a twin shot – and there are some minor changes and additions to the level design. The order of two levels have been swapped and two levels have been combined into one. There’s also a new boss near the end, the Black Valkyrie. Although the volume of enemies has been toned down, dying will send you back to the beginning of the level unless you gained extra lives. A password feature has also been added as well as a separate status screen. In many ways it’s a richer, better balanced game than the arcade version, but the lesser visuals and music prevent it from being the definitive version. Still, it’s a classic either way. 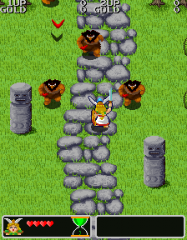 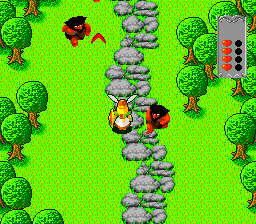 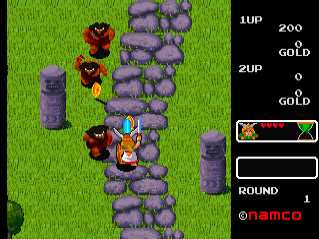