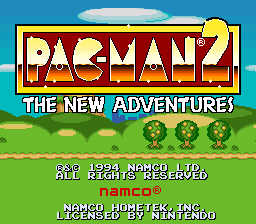 Pac-Man sat a difficult spot in the 90s. His sheer popularity by the start of the 80s had carried over long enough that he was still a marketable character on name alone. However, the maze-based arcade games he was known for had long since fallen out of favor, aside from the rare port here and there. The silver lining was that this allowed Namco to dip their feet into other genres with the character. It’d be games like these, starting with 1984’s Pac-Land, that would help keep the character relevant against the onslaught of lesser mascots that hit the 90s. Most of these efforts were decent in their own right, but Pac-Man 2 stands as the most memorable of them all. 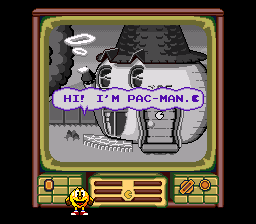 Pac-Man has now moved out to a small suburban town with his wife and two kids, a setup not too far removed from the 1982 animated series. The game itself takes place over four different missions, each of which begins with Ms. Pac-Man interrupting her poor husband’s relaxation time. The first mission is as simple as going to the nearby farm to get some milk for the baby, but as the game progresses, Pac-Man will have to trek further and further out from his home to accomplish his goals. All the while, Pac-Man’s nemesis, the Ghost Witch of Netor, sends out her spectral minions to prevent Pac-Man from the heroic quest of… running his errands. At least until the latter half of the game, when she decides to attempt at least some kind of evil plot. 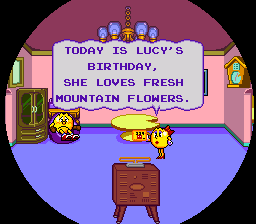 The actual gameplay would be best described as a point and click adventure, with one very important distinction. You don’t have direct control of Pac-Man himself, as he’ll wander around and interact with the world autonomously. You, the player, have control of a slingshot and a floating hand, which you’ll use to guide Pac-Man around the world. The hand is used to point left or right to get Pac-Man to move in that direction. The slingshot is used to get Pac-Man to notice specific objects, knock them over, or if you’re getting bored, to repeatedly pelt Pac-Man in the face with rocks. He doesn’t like that very much. 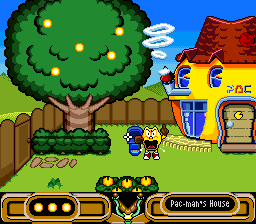 Indeed, Pac-Man’s mood and current opinion of you is a major gameplay mechanic, and determines how he’ll interact with the world around him. Various things around Pac-Man can occur to shift his mood, and he’ll often shift between several even without your input. Getting yelled at by the local farmer, for example, will sadden him, while having caterpillars fall on him will make him nervous of everything. There’s a variety of different emotions and degrees of which Pac-Man can feel, from ‘grouchy’, to ‘ear-steamingly, foot-stompingly enraged’, to ‘literally insane’, among many others. 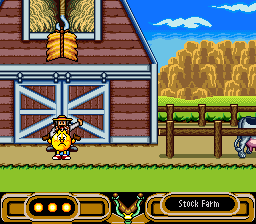 The way Pac-Man’s feeling also ties into how easy it is to get him to control. If he’s especially upset, there’s a chance he’ll ignore your commands until you manage to improve his mood. This can be somewhat annoying, if there’s something dangerous around you don’t want him to do. Many of the game’s puzzles also tie into Pac-Man’s mood, and having him happy isn’t always the solution. Pac-Man’s tendency to to kick things when he’s upset can knock certain things over and allow you to progress. It’s a fun gimmick, overall, but there there are times when having to manage Pac-Man’s mood swings can get annoying. When you can hardly get Pac-Man to do what you want, screens with things that can improve his mood seem further away. 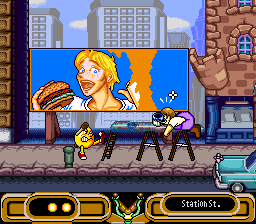 Even despite the slower pace of the game, danger still lurks all around. Ghost attacks are far rarer, but when they show up, they’ll harass Pac-Man to the point where he’ll pass out. To deal with them, you’ve got three Power Pellets your slingshot can fire. Once Pac-Man gets a hold of these, he’ll transform into the caped Super Pac-Man, capable of eating through ghosts just like old times. As a bonus, eating a power pellet will greatly improve Pac-Man’s mood. If you run out, there are various places to find more, but the most reliable source is the tree in Pac-Man’s yard, which can be somewhat of a trek. 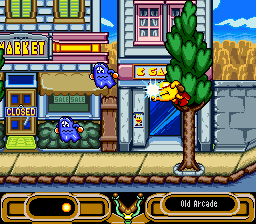 It’s not just the ghosts that you have to worry about, either. If you don’t have Pac-Man stop and look at a rock in his path, he’ll likely trip on it and knock a skateboard into the air, where it’ll fall on his head. Some failures are more obvious; tick off the guy selling hot dogs and Pac-Man won’t get anything except a faceful of ketchup. Thankfully, death is an inconvenience at worst and a fun easter egg a lot of the time, as it’ll simply place you back at the beginning of your current screen. There are rare times, however, when you’ll run into a loop where Pac-Man gets himself killed multiple times in the same way, which can quickly grow frustrating. 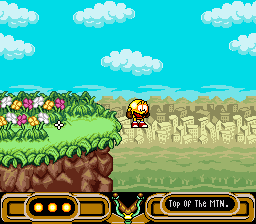 The game only clocks at about a couple of hours if you’re aware of what you’re doing, and the puzzles aren’t generally difficult if you’re willing to apply a little cartoon logic. The point where the game gets most difficult is a small action sequence where Pac-Man’s on a hang glider. This segment asks you to use the same control scheme you’ve been using to scare off ghosts and keep Pac-Man from crashing into things. Hitting the ghosts that appear can be difficult while they’re moving, and the fact that you have to keep an eye on Pac-Man and potential targets can definitely add to the game’s runtime. There’s a couple of other action segments, including the very end of the game, but these don’t get quite as difficult, thankfully. 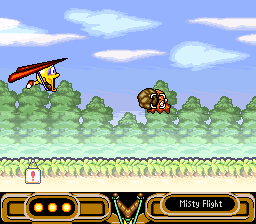 Despite the game’s somewhat short length, the game only offers a password system, giving you one each time you finish a mission. While the game’s just short enough you won’t lose too much progress, it is the sort of game where a save system wouldn’t have gone entirely amiss. Aside from the main journey, there’s also a sidequest to find pieces of a cartridge to unlock a secret minigame, which helps add a little more length to the game overall. You’re also encouraged to seek out all the potential interactions hidden with the game, as varying percentages of completion offer secret codes at the end of the game. For how short the overall game is, it makes up for it with density of content fairly well. 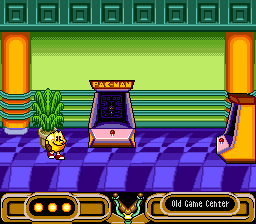 The highlight of the game would definitely have to be its animation, the game’s claim to be an “interactive cartoon” not entirely off base. Pac-Man might be one of the most expressive characters seen on a 16-bit system, and it’s a lot of fun to watch the multitude of interactions he can get involved in. While most of the effort was clearly put into Pac-Man himself, the sheer volume of animations he has more than makes up for it. The audio, while not generally noteworthy, has a few neat touches. The music’s tempo will speed up or slow down depending on Pac-Man’s mood, and the character himself has a synth that serves as his ‘voice’. It might not be a digitized sound effect, but listening to him ‘scream’ as he runs around flailing his arms is hard not to smile at. 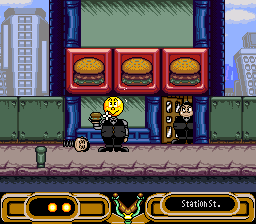 The best part of all are rare occasions when Pac-Man is doing really well, in which case he’ll start doing, er… this.

Overall, the sheer novelty of Pac-Man 2, both in its series and on its own merits, makes it worth seeking out. As one of the few point and click adventure games for either console, especially one with its own twists, it’s held up pretty well. Despite some frustrations, especially during the game’s short action scenes, it’s a shame that the idea wasn’t followed up further. As it stands, it’s definitely one of the highlights of the period when Namco was willing to do new and crazy things with their mascot. 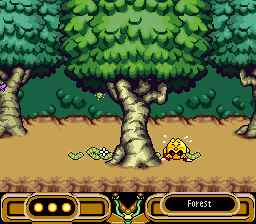 There’s only one major difference between the two versions, involving the hidden minigame. In the SNES version, you unlock the ability to play a recreation of Ms. Pac-Man if you find the hidden cartridge pieces. In the Genesis version, you instead unlock “Pac-Jr.”, starring Pac-Man’s cap-clad son. This isn’t a recreation of the earlier Jr. Pac-Man, but rather an graphical and audio edit of the Ms. Pac-Man minigame. A recreation of the original Pac-Man is available for play in both versions, however.