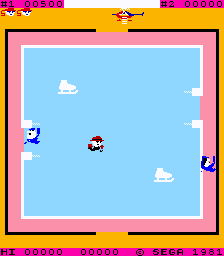 Even in their early days, Sega were always thinking of bold new concepts to innovate and evolve the field of video games. Ever wanted to play a gallery shooter modeled like Space Invaders? Carnival. A vehicle commando game that turns into a tactical maze shooter? Borderline. A train simulator-racing-shooting hybrid set to Rydeen? Super Locomotive. Granted, those all involve shooting of some kind, but it’s a simple game factor to understand: You good guy, shoot bad guy. Now what about a game from 1981 that doesn’t kill anyone you shoot, and you are assumed to be the bad guy fighting against the good guys? 005 (likely named as a tribute to James Bond’s codename of 007) was pretty radical for a game around that time, even if it was more interesting in concept than in practice. You assume the role of a spy taking mysterious briefcases to helicopters while avoiding the police and making a daring getaway yourself. No one knows if you’re working for a shady organization or if the cops themselves have been bribed by nefarious powers, but the fact that you’re going against the police makes this an early example of an anti-hero in interactive media.

Anyway, the game itself is billed on the Spartan title screen as “a game in four scenes,” advertising its main selling point of including four different types of gameplay. It’s one-fourth short maze game, 25% prototype stealth, a quarter of a frustration simulator, and the rest is a shooter. Yep, there’s that factor of shooting again, but the main emphasis for most of the game is not upon shooting even though your spy-guy has the means to do so. His gun does not kill but instead shoots a paralyzing gas, suitable for stunning the police who are the only enemy you face until the last scene. You first face cops in the “maze” segment, where you must hightail your keister into a building. Usually, you start out pretty close to an available edifice, so these mazey bits are really more of a hub where you pick either the “forklift” or “ice skate” building to tackle first. 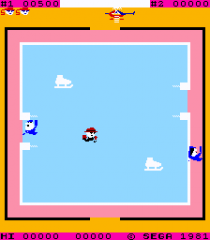 Choosing the forklift leads you to arguably the best part where you evade the cops in a dark warehouse. You must attempt to evade their flashlights while hiding behind crates and making your way to the exit to which the helicopter is closest. You’re not immediately busted if a flashlight grazes you, but the cops move faster; you also move quicker and must hurry up before you get caught. 005 technically counts as one of the earliest stealth games, even if the stealthing in question is only about a fourth of the gameplay. Another fourth is the far less gratifying “ice” level where cops attempt to surround you on the edges of a skating rink. You must head out onto the ice itself and attempt to avoid them, but as you can guess, skittering across the slippery surface is incredibly hard to control. The cops are merciless and have a much better control over the ice than you, homing in like angry hornets. These icy stages are significantly sloppier and more frustrating than the warehouse scenes, and beating them almost comes down to a matter of chance. It’d help if shooting the cops would actually clear them, but it only causes them to fall down stunned and IMMEDIATELY send in another policeman. The worst part is that you can’t even move over stunned cops, so it usually does more harm to fire away than to leave them go. This isn’t so bad to deal with in the warehouse, but it makes the ice rinks a real chore to clear. 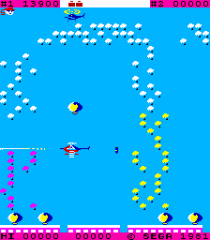 After you’ve completed both of these stages, you suddenly find yourself in your escape helicopter on what is the most bizarre segment of the game by far. This part is paradoxically described as a vertical shooter where you fire horizontally. That is to say, it would be much easier to hit your target (the rival helicopter at the top of the screen, presumably a police chopper) if you could shoot above, but helicopters don’t feasibly work like that. Instead, you must shoot down many weird objects (they look like trees hovering in midair?) that act as buffers protecting the helicopter as it drops bombs on you from above. As you thin out the floating thingies, the helicopter drops down and attempts to gun you itself, and it’s a pretty quick shot, but you get a big point bonus if you take it down before it can do likewise. If you take down the helicopter, the game thusly loops back to the beginning and ramps up the difficulty for the next play. As with all arcade games of this time, it keeps on looping over until your lives run out or you break the scoreboard and glitch the game out. Also with all games of the time, there isn’t much to say about the visual and sound design. The graphics are eye-stabbingly garish, where the primary colors seem to be consisted of your typical printer inks: Yellow, magenta, and cyan. The only semblance of music is in the warehouse segments, where a sort of mangled rendition of what may be The Pink Panther theme drones over. Neither factor is great, but they suffice even if the minimalist yellow title screen is rather violent on the retinas. 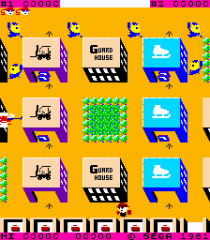 005 is certainly an interesting game, but whether or not it’s a good one is certainly up for debate. It certainly tried to do several things at once, though this sort of action/maze/stealth/skating/shooting mish-mash of genres may have done more harm than legitimate innovation. The maze segments feel too short to really have much actual weight, and the ice skating areas are nightmarish. The warehouse scene is alright, but the helicopter scene is quite weird and almost doesn’t fit the theme of the game. The game might have been overall stronger if it was just dodging cops’ flashlights in an endless chain of dark warehouses. Still, 005 at least gets effort for attempting to do multiple different things at once and is certainly one of Sega’s stranger early game concepts. 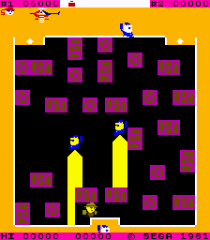