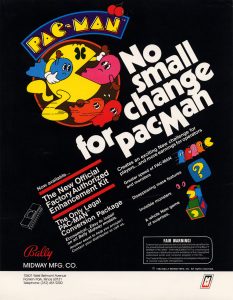 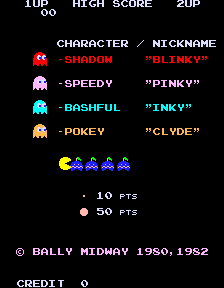 Released a full year after Ms. Pac-Man, Pac-Man Plus is Midway’s second attempt at continuing the franchise without Namco’s involvement. Unlike Ms. Pac-Man, which would feature new mazes and new intermissions to encourage further play, Plus is a simple modification of Namco’s original classic. The running theme is that it’s a far harder game than the 1981 original, so much so that even those well-versed with vanilla Pac-Man may end up having trouble. Beyond that, there’s little else to say about it and little to recommend nowadays, unless you’re desperately seeking the hardest version of the original game you can find.

For the first few moments, the game plays almost exactly like its original counterpart. You may soon notice, however, that the ghosts are faster and far more aggressive from the very start, making it much more difficult to reach your first intermission. Even from the first maze, any ghosts on your tail will inevitably overtake Pac-Man without the aid of a power pellet. Not that those will be much help, as power pellets start to wear off almost the moment you collect one. Far from content with that tweak, however, Midway added an assortment of extra surprises for those hoping for reprieve from the ghosts. 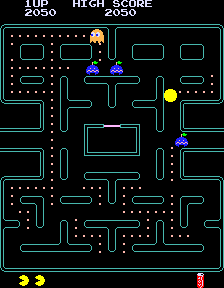 Upon grabbing a pellet, you might receive the usual effect, if you’re fortunate. If not, only three ghosts will become vulnerable, leaving the fourth still chasing after you. Other times, the ghosts might turn invisible, or either the dots, the walls, or even both may vanish entirely. Picking up a bonus item will also turn the ghosts invisible, but eating them in this state will offer double points. If you’re able to catch at least a couple in this state, it can be valuable for scoring at least a few more moments of playtime. 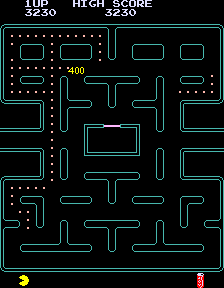 Aside from that, there’s little else to say that hasn’t already been said about the original game. There’s some minor cosmetic difference, like a different maze color and the way blue ghosts sprout a leaf and stem, but nothing groundbreaking besides the massive leap in difficulty. The entire game feels like it was specially engineered to force some poor child to give up their quarters as quickly as possible, and given the state of arcades at the time, that’s quite likely that was the overall intent. Nowadays, unless you’re eager to try and push your Pac-Man skills to the very limit, there’s little to recommend Plus over any other variant of the game. 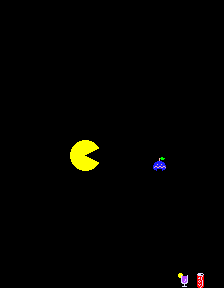 While the game didn’t receive any official ports during its heyday, it would make a few appearances among Namco’s many Pac-Man compilations. These include a mobile phone port, several Jakks Pacific plug and play consoles, and Arcade 1Up’s home-use arcade cabinets. Several homebrew ports were also made for the Atari 2600, 5200, 7800, and the Colecovision.