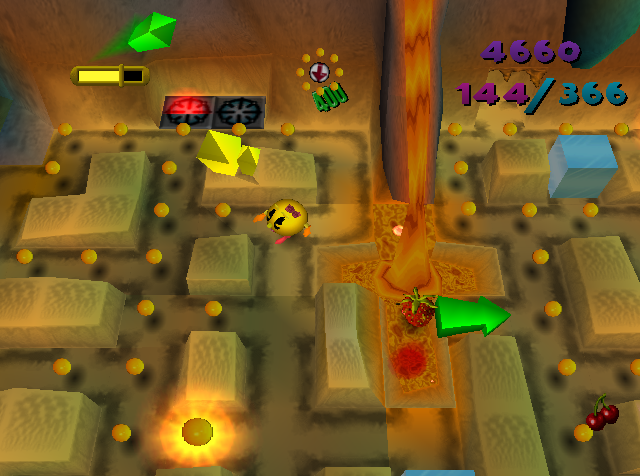 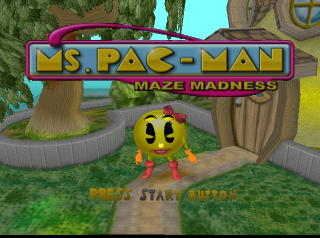 With the success of Pac-Man World helping to keep Namco’s mascot relevant in a world of 3D platformers, it must have only seemed logical to update his wife, as well. Instead of a platformer, however, Maze Madness takes the core of ‘eat dots, avoid ghosts’ and adds a massive amount of new features on top of it. The result, while not anything spectacular, still makes for one of the best games to come out of the ‘arcade game remake’ boom of the late 90s and early 2000s.

The plot is especially unimportant, even by series standards; an evil witch is trying to steal four magical gems hidden across four regions of Pac-Land. (The question is raised why Pac-Land contains its own versions of Egypt and China, but it’s best not to think about that.) To add slightly more to the stakes, resident source of exposition Professor Pac-Man has been kidnapped by an unknown force. It wouldn’t be a spoiler to say that a ghost witch is involved, the villain of choice when it comes to Pac-Man games. This one, however, seems to have no relation to the 16-bit Pac-Man games of the past. 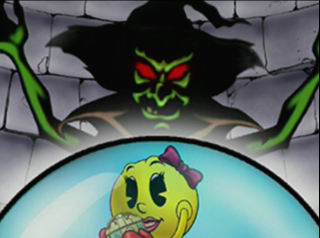 There’s 16 levels to traverse, each made up of a series of small mazes interconnected by various transitions. The goal of each stage is as simple as finding the exit, but as expected, it isn’t quite as easy as said. The primary blockades are gates that require a certain number of dots to pass through, giving you a reason to scour each level for as many as you can collect. Each level also has several stars to unlock bonus content and hidden levels, which you can earn for finding all the hidden fruit, beating the level’s time trial, hitting a certain score threshold, and finishing the stage itself. Somewhat annoyingly, you have to get a majority of these stars in order to unlock the final stage. 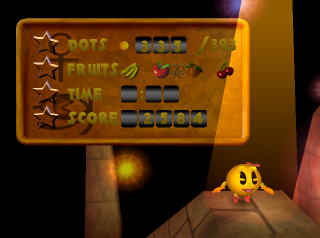 Unlike the assortment of new moves Pac-Man got for his newest outing, Ms. Pac-Man is only capable of moving around on the paths provided to her. Surprisingly, at no point during the game are any button presses even necessary, except for advancing dialogue boxes. Instead, everything you encounter in the environment can be interacted with simply by walking into it, something which makes the game incredibly simple to learn. Across the mazes, you’ll find bounce pads to get to other areas, dash panels for knocking certain obstacles over, and floating platforms to carry you across chasms. Aside from collecting dots, you’ll also occasionally need to hunt for keys to remove lock blocks that occasionally appear. 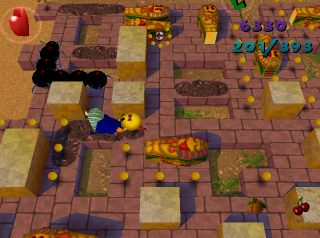 More than anything, though, you’ll be solving a lot of puzzles that halt progress to the next part of the maze. Sometimes you’ll be tasked with pressing buttons in a particular order, but most of the time, you’ll be pushing around boxes. You’ll need to move ordinary boxes around to create platforms and fill holes, and move TNT crates to destroy obstacles before they blow up. The game does a good job of introducing new concepts to the ones you’ve already mastered throughout the game, however. Lava needs ice blocks pushed into it to create safe passage, certain passages can only be entered from one direction, and certain ghosts will lay out gunpowder that needs to be lit by another enemy to take out certain explosive blocks. 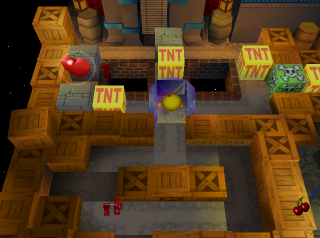 Of course, you also have the ghosts to worry about, which will require the traditional power pellet to keep off of your back for a bit. Along with the ghosts, each of the four worlds has their own unique foes to deal with, each of which offers new attacks to avoid. Cave-Pacpeople will blow jets of fire towards you, while the Anubis-looking monsters will charge up a difficult to avoid homing projectile if they’re left alive long enough. Unlike the ghosts, however, these special enemies only rarely respawn after you chomp them, making removing them generally your first priority. 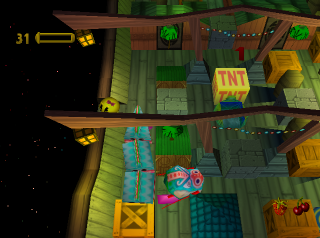 Ms. Pac-Man now has a health bar, with the ghosts taking a surprisingly low amount of it. What you really have to be careful of are the hazards, as no amount of power pellets will save you from blowing yourself up, among other dangers. Certain pathways will collapse into the abyss if they’re not crossed quickly, while sparks on the ground might set off an explosive block before you’re finished with it. The game does a good job of introducing new obstacles as well, even if they not usually especially hard to navigate. Health pickups and extra lives are very common, and you’ll find yourself with lives in double digits by the first few stages. 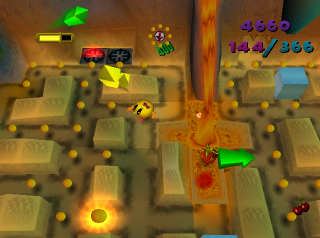 Even if the game isn’t especially difficult, it makes up for it at the pace it adds on new elements. To be truthful, while it’s hardly something on the level of Myst, there’s just enough thought involved that it’s fun working out how to reach that pretzel out of your reach. It’s certainly a lot more thoughtful than the points where you simply have to run the maze and collect the dots, since the ghosts are typically so non-threatening that it’s often easier to just run right through them. To add some variety, there’s also a couple of minigames. One of these is a sled race that might be the toughest part of the entire game, given how often you’ll be sliding right off the edge of the track. 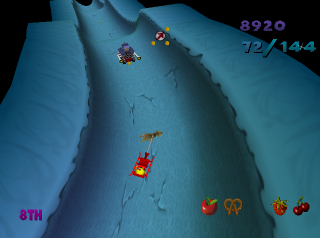 The collection aspect will certainly add to the game time as well, although perhaps not in the way you’d hope. Not only will you have to visit past levels to reach areas you couldn’t before, you’ll likely have to play through a few time trials as well. These can be far tougher than the regular game, asking you to navigate the puzzles while under a time limit, every hit you take only sapping your time further. At the very least, perhaps we should be thankful that you don’t have to collect every star. Once you’re reached a certain threshold, you’ll be allowed to face one of the game’s two bosses – a concept that works better than you’d think, given the lack of buttons.

Once you’ve tired of the single player campaign, there’s also a simple multiplayer mode for up to four players. There three different modes to choose from, taking across one of several single screen maps. One mode is basically tag with a ticking time bomb, another has you race to collect enough dots before everyone else. The final mode has you collecting dots as well, but with the twist that only the ‘Pac-Person’ can eat the dots, and the other players have to tag them. All three modes are fairly simple, and while it’s functional enough, it’s unlikely to really hold interest compared to a more specialized game for its purpose. 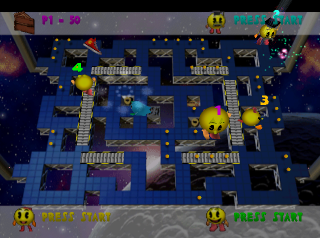 Graphically, the game features colorful graphics, detailed without getting in the way of gameplay itself. The models, while somewhat blocky, fit the cartoony style well. The music, while upbeat and fitting each of the areas well, is never especially memorable. Credit is due for the fact that the soundtrack never has to rely on the well-used series leitmotifs, however, something that couldn’t be said about Pac-Man World.

Overall, while it’s a game that seems to be geared to a younger audience, Maze Madness is still a game worth checking out for fans of the series. The puzzle element adds a lot to a game that could have been nothing but a simple retread. As an action/puzzle game, it stands well on its own, as long as one can stomach the collection aspect that eventually appears. A sequel for the next generation was apparently started, but never saw release.

The main console versions are mostly the same, with only slight differences. The N64 version has cutscenes made up of still images and no voice acting, which is hardly a major cut. The Dreamcast version is probably the definitive release, with somewhat sharper graphics and higher quality music.

The Game Boy Advance version most obviously features entirely redrawn graphics to fit the handheld, with everything now in sprite form. While it looks pretty good, the camera is also zoomed much further in, making it harder to see around you. The radar that showed you where the nearest dot can be found is also missing, which means it’s possible to end up losing dots that you should have rightfully found. Aside from those issues, the gameplay holds up well. Its fatal flaw is the music, which attempts to sample music directly from the Dreamcast version instead of recomposing it. Unfortunately, not only are most of the tracks missing, but what’s left is extremely crackly, making it highly unpleasant to listen to for long periods. 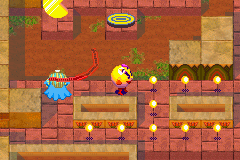