By now, everyone and their mom knows that Samus Aran, the interplanetary bounty hunter from Nintendo’s Metroid series, is a woman. Nintendo was praised for this choice at the time, however Metroid (1986) wasn’t the first title to reveal the hero’s gender when you complete it. This honor almost certainly goes to Baraduke, a shooter released by Namco in the arcades in July 1985, about a year before the seminal NES title. 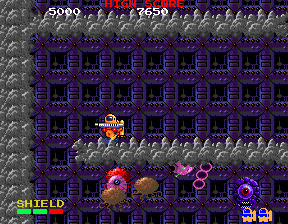 There is a number of oddly specific similarities between the two titles: in both you play as a faceless space soldier in a bright-colored suit who travels inside a sprawling complex of caves full of weird alien creatures. Some of those creatures look like jellyfish in both games, and the final boss of the Namco game even looks kinda like a cycloptic spiky deformed head. That still isn’t proof that Yoshio Sakamoto ripped off Namco’s title, however, since the two games play very differently. Most likely they were both inspired by the first Alien movie: what little plot is there in Baraduke (spaceman receives a SOS signal from a formerly peaceful planet) recalls directly the beginning of Ridley Scott’s film.

Baraduke also shares some similarities with Capcom’s arcade game Section Z that came out roughly at the same time. In both games the players control a free-range spaceman with a jetpack traversing a number of sectors scrolling both horizontally and vertically, with the difference that in Baraduke the player characters are affected by gravity and their gun’s recoil. (A bit of trivia about these characters: their names “Kissy” and “Takky” derive from the nicknames of Yoshihiro Kishimoto and Yukio Takahashi, respectively programmer and designer of this title) 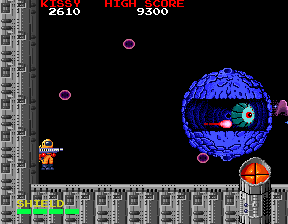 The very first thing you see after starting the game is a round, one-eyed, floating yellow creature that goes towards our player character, and proudly proclaims “I AM YOUR FRIEND!” in a garbled digitized voice (provided by Namco employee Junko Ozawa). This little guy is a Paccet, a member of the only alien race that is not hostile to you. The Paccets are being attacked by a race of blue aliens known as Octy. Kissy needs to explore all eight sectors of the underground Baraduke fortress, for a total of 48 levels, to reach the bottom where the Octy King resides, defeat him and save the Paccet homeworld.

Baraduke focuses more on the shooting than the exploration, which is there but to a minimal extent as opposed to Metroid‘s huge interconnected areas. The goal of the levels is to find and destroy the Octy to open the stage’s exit, a pipe that leads to the next stage. When the Octy blows up, they leave behind a capsule that can randomly contain a score bonus, a gun power-up, a Paccet, or an enemy looking like a veiny, mutated purple Pac-Man. Well, it is a Namco game. 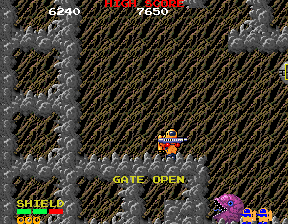 You need to pick up all the Paccets you can find because, while they don’t usually directly help Kissy, they are an important resource for her survival. She is able to withstand two points of damage before losing a life, but at the end of each level there is a roulette mini-game that lets her gain additional shields, up to a maximum of eight. She’ll need them, since the game gets pretty hard very quickly. The more Paccets are saved (up to eight), the bigger your chance of winning an extra shield becomes. Beware of the Octy tiles that remove a shield from your total, though. If you don’t land on a Paccet tile, you can keep all the ones you’ve got, but when you win a shield their number gets reset to zero. The total resets when you accidentally (or not…) kill one of them, too.

Every fifth level of a sector is a sort of bonus stage where the gates are already open and there are only several capsules scattered around and a couple enemies roaming the place. These levels are meant for Kissy to raise her chance to gain new shields in the mini-game, but she can still die in these. After that there is the boss area. Once you get to face the boss, all the Paccets you eventually still have decide to show their gratitude by suicide attacking the enemy (!!!), hurling themselves one by one against the creature in order to briefly stun it. To defeat the Octy King at the end of the eighth sector, after having hit his lone eye enough, you have to enter its mouth and then shoot his eye again, a detail that isn’t explained in the game or any related material. 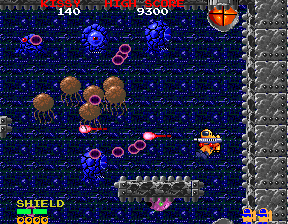 This is to be expected from a Namco arcade from the 80s, though: Baraduke is another brutally difficult game. Our spacewoman shoots at a fast rate, but only to the left and right, and there are no other weapons than the ray gun. The Octy are stationary, but they constantly spawn fast bullets and lesser enemies (some of which can shoot on their own), and sometimes they are placed at points that make them almost impossible to avoid. At times the game looks like a proto-bullet hell. Other aliens appear from nowhere and some of them have randomized movement patterns that make them hard to predict and avoid. There are just too many random factors, from the shield roulette to the capsules that must always be approached with caution, lest you get chomped to death. Also, Kissy’s invincibility time after a hit is almost nonexistent, and she can be destroyed in a couple of seconds. Plus, the machine’s default factory settings don’t even let you continue from the last level reached, forcing you to start from the beginning every time Kissy loses her last life.

As another typical facet of 80s games, it contains several esoteric scoring bonuses: one involves the massacre of twenty Paccets from the beginning of the game, which only makes the adventure even more grueling as you can’t get more than two shields this way. Some bonuses the game spawns are tiny version of the enemies or even bonuses from other titles such as Pac-Man and Dig Dug (strangely, the Galaxian flagship is absent this time). 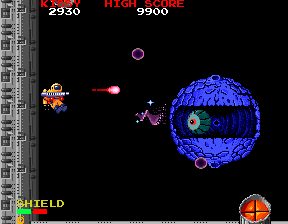 Baraduke is based on the hardware for Pac-Land and a video system derived from the one used for titles like Dragon Buster and Metro-Cross, that allows for pretty nice and detailed graphics for the period. The sound was handled by Yuriko Keino, who made things different than usual. Outside of the sound effects (including subtle stuff like the sound of Kissy’s steps on surfaces) and several brief jingles, there is no background music, only a continuous slow pulsing beat that becomes a bit faster when you are on our last shield. It actually adds to the subtle creepiness of the entire game, that however was phased out of the sequel, a more traditional horizontal shooter.

Baraduke is a bizarre, sadistic title that never became anything more than a cult classic for Namco, but still received the honor of an arcade-only sequel three years after. The company never ported the game anywhere until 1995, when it finally was released for Sharp X68000 as Vol. 13 of the Video Game Anthology series, in pretty much arcade-perfect form, courtesy of Dempa. Two years later it was added to the games featured on the fifth CD of the Namco Museum series for the PlayStation. In 2009 it also became part of the titles available for download on Wii’s Virtual Console. There’s also an alternate arcade version called Alien Sector, which only differs in the title screen graphics, since the game was already completely in English even in its original Japanese release. 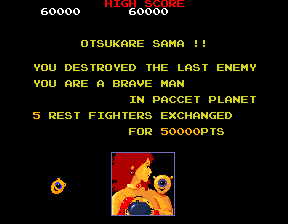 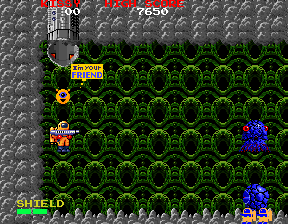 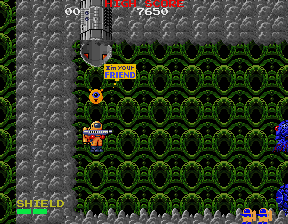