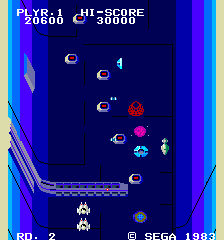 Namco’s Xevious was influential to the genre of shoot-em-ups and was instrumental in evolving the genre up from the cornerstone of Space Invaders. If not the first ever vertically scrolling shooter, it was definitely the most popular for its time and broke the notion that shooters had to take place on one controlled screen all the time, with the action scrolling over forests and plains and seas and other terrain while throwing aerial and ground-based enemies at you. Every other vertical shooter to be made after 1982 owes their existence to Xevious, although the genre would certainly evolve in directions that Namco wouldn’t have forseen. Take Star Jacker for example, an unassuming early Sega shooter that may not be the most exciting or outlandish shmup of all time, but it’s a solid product that takes the basic premise of Xevious and adds its own twist to the formula.

The big difference with Star Jacker is that all of your ships are controlled at once. You start out with three ships on a large docking cruiser and take off to infiltrate the enemy’s bases. Your “reserves” are flying out in the open for everyone to see, a double-edged sword that affects your firepower and your evasive ability. You control the flagship as the other two ships trail behind you in a similar fashion seen by the Gradius option spheres a couple of years later. Your ships are outfitted with cannons for aerial enemies and bombs for ground units. All ships fire in tandem, making it easier to hit enemies when you have your full squadron. However, the obvious caveat to having all three ships out is that you are more vulnerable to enemy fire. Your lead ship is most likely to be hit, but there is always a chance that any of your trailing ships can also be hit, causing the action to freeze and forcing the remaining ships to realign. If any ship gets hit, you carry on with one fighter lesser, making it easier to avoid shots and obstacles but giving you less firepower to beat the baddies. Obviously, it’s game over if your last ship is wrecked, but you can indeed get bonus ships. If you do well enough, you’ll gain a bonus ship when you finish a stage and return to the docking ship on which you started. It is possible to have four ships in your squad, and space on the cruiser even indicates the possibility of a fifth if you are good enough to earn it.

Star Jacker throws a decent variety of foes at you, from simple colorful dive-bombing spheres and standard enemy fighters to super-fast flying missiles and weird orbs that break into indestructible space debris when shot. There’s even a sort of boss enemy, a red-orange crescent ship that takes a lot of punishment. If you can destroy this ship before it flies away, you get a significant point bonus and instantly warp to the end of the level. There’s not a lot else to say about how the game plays, nor about its appearance. The graphics and sounds are competent, nothing too outright impressive but definitely colorful enough for Sega games of the time. A nice touch with the sound design is how the background music changes depending on when you are in outer space or flying through one of the enemy’s bases. Aside from that, the main reason why Star Jacker stands out its its simultaneous ship control, an interesting mechanic that not many other shooters have used, except for Sega’s prior vector shooter Tac/Scan. Aside from its prime gimmick, it’s a fast and fun space shooter that’s representative of the arcade golden age, when shoot-em-ups were popular and just about every game company contributed to the genre.

Like many of Sega’s early and simple games, Star Jacker made it to their SG-1000 console with a reasonably accurate translation, though with a few different points from the arcade. The most noticeable change is that you start out with four ships instead of three, giving you a slight offensive advantage early on. The graphics are obviously simplified but make a decent enough transition, and while the vertical scrolling is naturally a bit choppy, it’s handled pretty well despite the SG-1000’s low hardware power. The sound is relatively close to the original and even keeps the tune change depending on your location. The enemy placements are a bit different and the game isn’t really more or less difficult than the arcade version, though the extra ship you get at the beginning can be helpful. It’s usually quite difficult to screw up a home transition of a relatively simplistic game (Atari 2600 Pac-Man notwithstanding), and the straightforward Star Jacker‘s only known console port turns out quite well and faithful to the arcade original.

The most arcade accurate port was released on the Sega Ages Memorial Selection Vol. 2 for the Saturn. In order to maintain a similar vertical screen ratio to the arcade game, the action only inhabits the left 2/3 of the screen, while the score and other data are moved to the black side on the right. Other than some slight tinkering with the palette, it’s otherwise exactly the same as the arcade game. 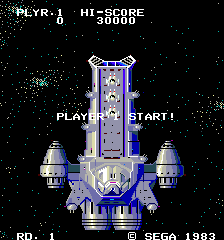 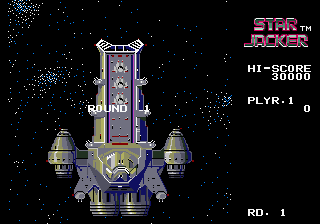 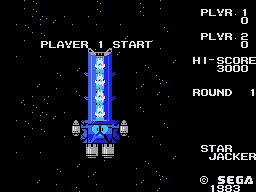 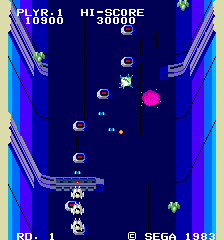 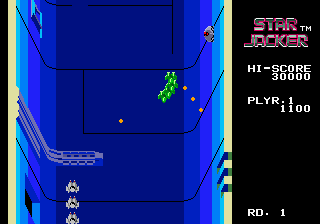