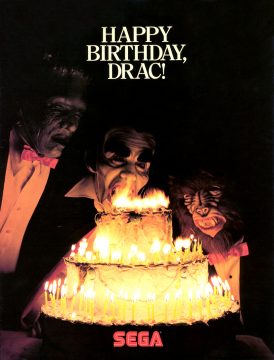 Sega’s little known 1982 arcade game Monster Bash puts you in the role of a young red haired kid named Little Red, as he takes on a trio of monsters. The first two screens take place in haunted manors, fighting against Dracula and Frankenstein’s Monster. The third screen takes place in a garden, fighting against Chameleon Man (which sort of breaks the whole “movie monster” thing that the first two bad guys had going for them). Each has some sort of gimmick to aid or complicate movement – Dracula’s stage has paintings that warp you around the screen, Frankenstein’s Monster’s level has pits which immediately drop you to a lower level, and the Chameleon’s garden has gates which flip in different directions, plus color swaps which will reveal the location of the villain. Upon completing all three screens, the game loops, and the difficulty increases. 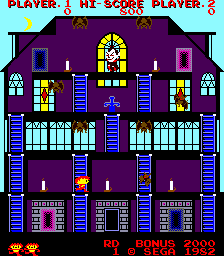 To attack, Little Red has a “zap” power, which lets him shoot little lightning bolts, but these only work against lesser enemies, while the sole boss monster in each screen is invincible. However, each screen also has a sword – if you light all of the candles, it will glow, and will grant a “Superzap” that can kill the main bad guy and let you proceed to the next stage.

There’s a reason why Monster Bash isn’t that well known, and that’s because it’s not particularly great. The minor enemies are all but inconsequential, and the first few loops are fairly straightforward. It only gets challenging around the third loop, when the boss monsters really start running away from you when you get the Superzap power, but at that point it’s more frustrating than fun, since they are far more agile than your character. The perspective changes are also perplexing – the manor stages are from a sideview, while the garden is viewed from overhead, yet graphically and mechanically they are essentially identical. 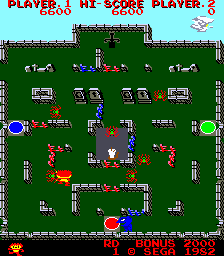 Only two real things make Monster Bash worth investigating. First off, the graphics are fairly decent, with a spooky yet cute atmosphere, and the melting animation when you kill one of the major bad guys is pretty neat. Secondly, it’s sort of a predecessor to Ghost House on the Sega Master System, which was released four years later in 1986. The first stage, with its ladders and warps and fighting against Dracula, is at least visually similar, though mechanically nothing alike. It’s as if one of the developers of the Master System version liked the concept of Monster Bash and took it in a different direction rather than porting or directly enhancing it. 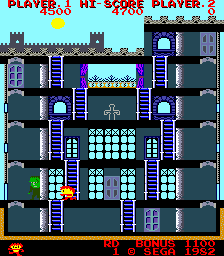 Monster Bash was designed and prorammed by Steve Hanawa, who was also responsible for a number of other early Sega arcade titles. Like Monster Bash and Ghost House, many of the themes, if not the gameplay, were reworked in various Master System titles – Tranquilizer Gun kinda sorta became Safari Hunt, Space Trek became SDI / Global Defense, and Space Odyssey became both Astro Flash / Transbot and Astro Warrior. However, Steve Hanawa was not involved in any of these console variations. He also developed the racing game Turbo (his most well known game) and Sindbad Mystery. Though there have been no official ports, a hobbyist programmer named Russ is creating his own version for the Colecovision.

Links:
Sega 8bit – Interview with Steve Hanawa Includes a look at some of his other arcade games.