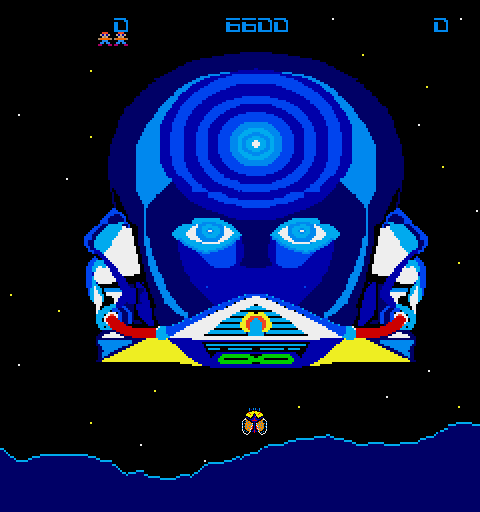 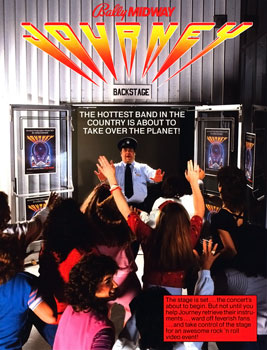 After Data Age bombed with their chance of a Journey game on the Atari 2600, Bally Midway decided to make a game based on the rock band for arcades in 1983. While this game improves on some aspects of Journey Escape, it still falls short of being something worth playing.

Some of the major improvements, other than better graphics and actually pretty nice music, is the fact that you actually play as the individual members of the band. And they actually look like they’re supposed to, as this game is actually the first game to use digitized sprites, specifically Black and White photos of the member’s heads placed on normal sprite bodies. Even through this new technology, the game is still pretty mediocre, and even the new technology creates some problems.

The plot involved the five members of Journey getting in their spaceship and travelling to alien worlds to get their instruments. The game is essentially a mini-game compilation, with one minigame for each of the five members of Journey, each involving two parts (get the instrument, get back to your ship). However, all of them have their own specific flaws. The player can select whichever stage they want a la TRON, but for the sake of the article they will be listed in clockwise order from the top. The song that plays in the hub world is “Lights.”

First is Steve Smith’s stage, which is one of the better ones, at least for the first half, and one of the worst for the second half. There are drums moving around the stage, and Steve has to jump on all of them to change their color from red to blue, all while not falling to his doom. It sounds easy enough at first, but once Steve gets his drums, the game starts throwing weird infinity symbols or bat things at him while he has to shoot them with his drums a la Galaxian. (All of the instruments are also guns. Go figure.) Again, it sounds easy enough, but more often than not another wave of bats will come out when you’re about to reach the exit and kill you, and the hitbox for your drums is huge, so Steve will probably get hit around this time pretty often. Often times Steve will be a couple pixels from the finish line and one of those bat things attacks him out of nowhere. Steve’s drum sprite would probably benefit from having one bass drum instead of two. The song that plays during Steve’s stage is “The Wheel in the Sky.”

Next is Ross Valory’s stage, which is probably the weirdest one. Ross has to jump on these escalating elevators in order to reach his bass at the top of the screen. Once that happens, the game goes full bullet hell and the elevators start shooting vinyl records at him, and Ross has to shoot back at the pillars with his bass until they are destroyed. The first half of the stage takes a while to get used to, and the flurry of shots with no clear pattern makes it difficult and often times impossible to dodge. The fact that the pillars regenerate don’t help either. The song that plays during Ross’s stage is “Still they Ride”. 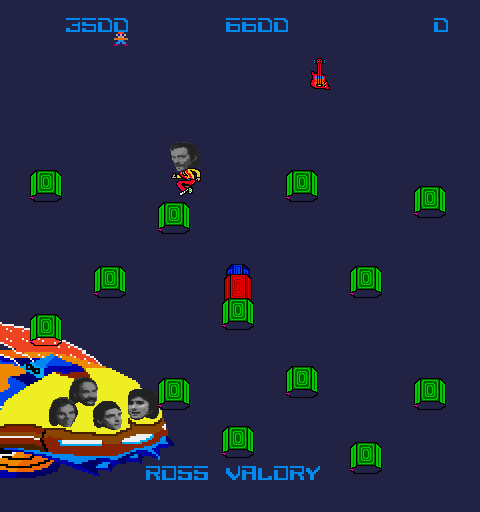 Afterwards is Jonathan Cain’s stage, which is probably the most derivative and one of the worse ones. Jonathan is essentially doing a reverse Donkey Kong, where he has to go down several slanted platforms to reach his keyboard, all while dodging these glowing beams that flash green and blue as opposed to barrels. After that debacle, he has to go back up to his ship while dodging and shooting at these various pink orbs with his keyboard. What’s tricky about the first half of the stage is that you automatically move in the direction you’re supposed to go, and jumping is done with up and really only raises your legs above the ground and doesn’t actually move you up. It isn’t so bad once you get used to it, but the second half is incredibly frustrating due to Jonathan moving so slow while having to dodge various obstacles, and the hitboxes for the keyboard and Jonathan’s head are huge, so he’ll often die from a projectile or object just barely grazing him in those areas. Overall, this stage is very frustrating, and probably amongst one of the worst ones. The song that plays during Jonathan’s stage is “Stone in Love”.

After that is Steve Perry’s stage, which is also one of the most frustrating ones. In it, Steve has to navigate through revolving turnstiles, the same from Cain’s stage, to reach his microphone. Once that happens, the turnstiles turn red and white, turn straight, and start moving downward, while Steve has to shoot them with his microphone. More often than not, this stage has the same problem of Cain’s stage in that the Steve’s head is huge, and often the turnstiles will lightly graze his hair and kill him. However, it is very easy to spam the fire button as there is no recovery time, so it’s a matter of making an opening for yourself and hoping for the best. The song that plays during Steve’s stage is “Don’t Stop Believin’,” which, sonically, is leagues ahead of the Atari version. 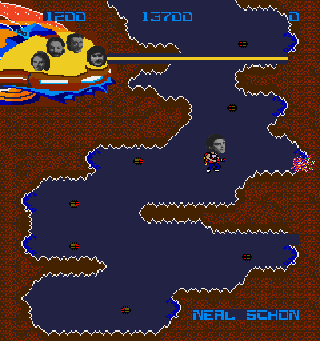 Finally is Neal Schon’s stage, which is probably the easiest in terms of both the first and second half. Neal has to navigate his way through a cave using a jetpack to get his guitar, while not touching any of the walls, afterwards, he has to get out and dodge these mini-scarabs. The mini-scarabs often don’t attack, and getting in and out is actually pretty easy if you’re familiar with games like Lunar Lander. The song that plays during Neal’s stage is “Chain Reaction.”

Once all the minigames are beaten and all the instruments are collected, Journey goes to their concert venue and starts playing a show. The player, meanwhile, controls Herbie the bouncer as he tries to block people from getting to the stage. If the concertgoers get to the stage, they take Journey’s instruments and scatter them across the universe, starting the whole game over again. In the original arcade release, a cassette tape player was hooked up to the machine that would play “Separate Ways (Worlds Apart)” during this section. When playing in MAME, you can download a sound sample to replicate this.

While the arcade game can be appreciated for its historical merit of its use of licensed songs and digitized sprites, both games feel very clunky, derivative, and overall very frustrating. A few years later, games such as Michael Jackson’s Moonwalker came out, which actually had decent game design in addition to starring real-life musicians. Today, most games starring real-life musicians are rhythm games such as The Experience and the Guitar Hero / Rock Band series. But what really needs to happen is a KISS beat-em-up. Why hasn’t that happened yet?