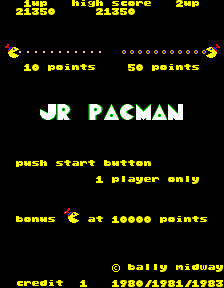 Bally Midway’s efforts to milk the franchise, Namco be damned, would march on with the release of Jr. Pac-Man. More of an expansion of what GCC had already done with Ms. Pac-Man than a true sequel, Jr. stands as a rather forgettable spinoff. It’s only really eclipsed in mediocrity by the baffling Professor Pac-Man and the cobbled together Pac-Man Plus. Even If it’s far from the lowest point in the early run of the series, that doesn’t mean it’s really necessary to seek out, unless you’re out to master every Pac-Man game you can find.

Jr. picks up where Ms. Pac-Man left off, with a scrolling maze and bonus items that move around the screen. The most noticeable difference are much larger mazes that now scroll horizontally. They’re actually about two and a half times the size of the maze featured in the original Pac-Man. This would be interesting, except none of these mazes feature any warp tunnels. Because of this, a single maze takes much longer to clear than in previous titles, which slows down the game’s pacing dramatically. 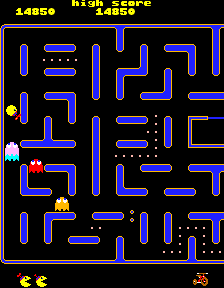 The moving bonus items also add a new wrinkle, as each time they pass over a dot, they’ll enlargen it. Bigger dots are worth more points, but will slow Jr. down a little as he eats them, which can give a chasing ghost just enough speed to catch up with him. Even more frustratingly, if a bonus item reaches a power pellet, it’ll hover over it for a few seconds. If you don’t grab it during this time, the bonus item will explode, taking both the item and the pellet with it. Even with two extra pellets above the usual four, wasting a pellet like this means that you’ll generally have to stop what you’re doing and go for the item. 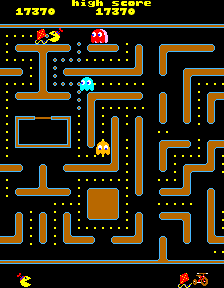 The result is a game with a lot of ideas that don’t lead to much beyond taking your quarter just a little faster. The fact that the mazes take so much longer gives the game a much more meandering pace in general, which doesn’t really fit with the more frantic pace of earlier games. If there’s really one thing the game improves on, it’s probably its presentation. The game boots up with an animated sequence of a stork delivering Jr. to his family, and the new intermissions feature a subplot of Jr.’s forbidden love with a ghost child. If there’s any reason to put forth the frustrations presented by the game, it’s probably this. 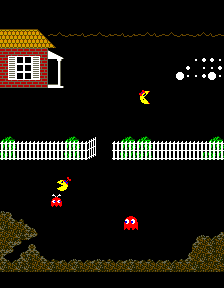 The port to the 2600 version suffers some obvious cuts to the graphics and audio, but still stands as a shockingly good port. While the maze now scrolls vertically instead of horizontally, it’s a minor change for something that keeps all the same beats of the original version. Even the jingles between stages manage to remain fairly faithful to the arcade version.

Much like Super Pac-Man, the 5200 port was never released, but can be found online. Like Super, it’s a very accurate port that even includes the full, horizontally scrolling maze. While the 5200’s joystick can be a source of the occasional death, it still stands at the best option to play the game, aside from using MAME.

The DOS version was made by the same programmers as the DOS port of Super Pac-Man, and it isn’t much of an improvement. While the framerate isn’t nearly as choppy, Jr. moves entirely too fast, and can easily catch all four ghosts every time he grabs a pellet. The maze no longer scrolls, but still has all six power pellets, which means that it’s far, far easier than the arcade version ever was, to the point where it only gets dull. Add in the same constantly playing PC speaker music from Super Pac-Man, and you have a port that’s best avoided. 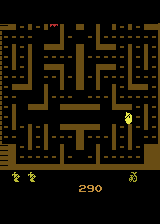 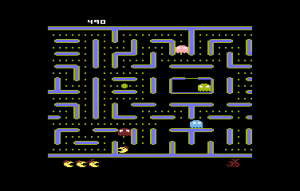