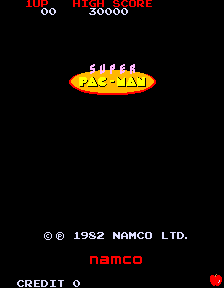 It took two years after the monumental release of the original Pac-Man for Namco to take the reins once more with the franchise. Perhaps they were too busy with their own many arcade titles of the time, or perhaps they were content taking licensing fees from Midway. Whatever the case, Super definitely feels like a true sequel to the original game, even more so than any of Midway’s attempts. There’s a lot of new ideas, so many that veterans of the original game might have to take some extra time coming to grips with them all. Even if it might not be quite as classic as that 1980 behemoth, it’s a fun game on its own and a worthy successor to the original game.

Instead of eating dots, Pac-Man is charged with certain food items, the look of which changes with every maze. While they’re far fewer in number than the dots, the task is complicated by the fact that many of these food items are hidden behind locked gates. To unlock these gates, you’ll need to pick up keys scattered across the maze, with each one collected making one gate vanish. In typical Pac-Man fashion, you’ll also need to collect all the power pellets as well, not only to progress, but to temporarily hold back the four ghosts wandering the maze. Replacing the bonus item is a star placed between two slots, and picking the star up when the slots are showing the same food item will award you some big bonus points. 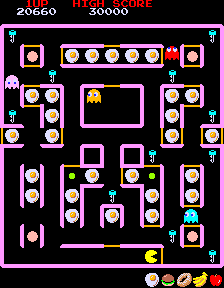 The biggest addition, and the one where the game gets its title from, are the two green “Super” pellets found on the board. Picking one of these up will double Pac-Man’s size, allowing him to eat right through gates without stopping. While you can’t eat the ghosts without also being under the effects of a power pellet, you can pass harmlessly through the ghosts while you’re enlarged, giving you some extra time to try and snag all the food. Super Pac-Man is also capable of reaching much higher speeds by holding down the new “Super Speed” button, letting you chomp through the maze with speeds so quickly that he becomes somewhat difficult to control. Finally, Pac-Man’s new form also plays a new role in the new bonus stages every few mazes. Here, you’re tasked with eating all the food items in a ghost-free maze, with faster times earning you bigger bonuses. 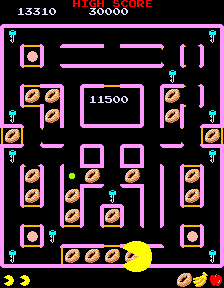 To be sure, this adds a lot more to keep track of than the original game. But it’s an ambition and a drive to break away from the familiar mold that really sells the experience. There’s layers of strategy far beyond the original game, for example, such as keeping in mind which gates you might want to open, and which paths you’d prefer to keep the ghosts from travelling down. It adds a layer of thought that doesn’t complicate the prime directive of “eat all the things” too much, the goal remaining familiar. Despite this, it still adds on to the general gameplay loop established by the original game by adding a couple of simple variables. 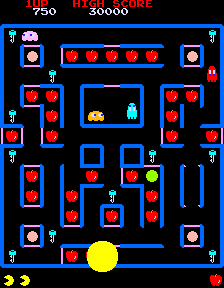 The graphics aren’t a massive leap upwards from the original game, but are serviceable enough. The fact that the ghosts turn thin and flat when Pac-Man turns super, supposedly to make him looks like he’s flying, looks somewhat weak, however. The new intermissions are amusing enough to make for a good reward for progress, as well. The game’s new sound hardware is put to good use with a few new jingles, although they’re mostly remixes of the original Pac-Man theme. 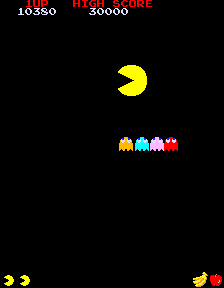 In the end, Super Pac-Man never got anywhere close to the adoration shown to the original. Super might certainly lack some of the timeless simplicity, but it’s still a fun game on its own merits. The number of ports is strikingly limited compared to Super’s predecessors, although there are still a handful.

The port for the Atari 5200 and 8-bit computer was never released, but prototypes can be found fairly easily. Aside from a minor graphical downgrade and a few times when the 5200’s analog joystick can lead to some wrongful turns, it’s a solid port that’s worth seeking out a reproduction for, if you have the hardware. The Commodore 64 version looks fairly accurate, and at first glance, it plays well. However, it’s far more difficult than the arcade game from the very start, with very aggressive ghosts and power pellets that wear off almost right away. It’s far from the best option, but it’s still best avoided.

The Game Boy Color version didn’t receive its own release, instead being included with Ms. Pac-Man: Special Color Edition. To compensate for the GBC’s smaller screen, there’s two different views to select from. One is closer to the arcade game, but has the maze scroll as you move around, while the latter sacrifices detail to get the maze to show on one screen. Since you have to keep more information on hand at one time, the zoomed out view is generally preferable. If you can get past that particular hurdle, it’s a perfectly functional port.

A version for Java phones also exists, featuring enhanced graphics similar in style to the later Pac-Man Arrangement. Aside from the graphical tweak, there’s nothing else in the way of extra features. It’s still far from the worst option, if you can find something that’ll play it. 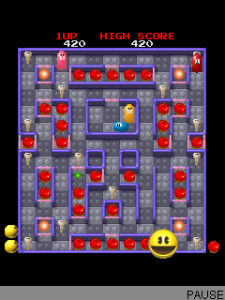 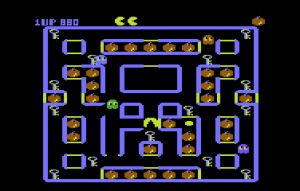