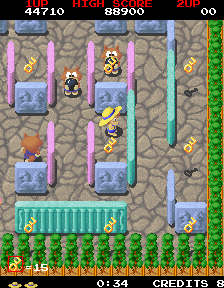 Released in 1989, Rompers is one of the last games to come out of Namco’s System 1/System 87 arcade hardware and is a bit of an obscure title for the company. The game was never ported to contemporary consoles, though it did later receive ports to the PlayStation, Wii, and Japanese cell phones. Given the visually and mechanically simplistic nature of the game, one could assume the game would have fit comfortably on the PC Engine, Mega Drive, or X68000 alongside more popular System 1 conversions, like Splatterhouse, Dragon Spirit, and Galaga 88, but no such ports were made.

Which is a bit of a shame! While not exactly a hidden gem, the game is a fun… well, romp filled with bright and colorful graphics, embellishing a game that’s taxing for both mind and reflexes. Rompers puts an interesting twist on the maze game genre Namco helped make popular with Pac-Man and The Tower of Druaga, turning level geometry into the player’s most useful weapon. 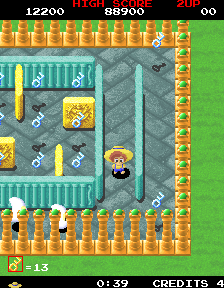 Rompers stars a young chap named, appropriately enough, Chap, on a quest to save his girlfriend Lumina, who has been kidnapped by Gurerin, a pale-haired, madman who resembles Kid Dracula, and his lovely devil girl familiar Tsukaima (or “Familiar,” if one were to translate her given name). The dirty pair have taken residence in a labyrinth of monsters and dubious structural integrity, and it is up to the player to take advantage of the latter to survive the former.

Chap’s primary action is a shove in the direction he’s facing. This does nothing to the enemies by itself, but a well-timed shove on one of the game’s slab-like walls will crush most adversaries, and occasionally reveal hidden gems and other point items. Also strewn about the levels are keys, and the stages end when all these keys have been collected. Levels also have a time limit, and when that runs out, the enemies speed up, and an impervious Tsukaima flies in to gently nibble on Chap. Whether he dies due to having his blood drained or from extreme infatuation is up to the player’s interpretation.

Now, this being a maze of monsters, the other enemies also have their own methods of killing the player, methods beyond just ramming into him. Many move just as fast as the protagonist, which, combined with the sprites having large hitboxes, makes careful and calculated movement a must. Some enemies have other abilities; helmet-wearing Nachibo need to be squashed twice to kill, while the rolling armadillo-esque Gororin can outpace the player and knock over walls with its rolling attack. The giant spider enemies on stages 10, 20, 30, 40, and 50 lay webs throughout the level, which can trap the player and leaves them helpless until they can wriggle out with the joystick and button. There are also bomb-throwing wolves, pink dinosaurs that breathe fire, seals that breathe ice, and slow-moving blob enemies in both smoking and non-smoking varieties. 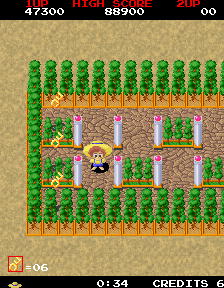 There are also quite a few treasures hidden throughout the labyrinth, uncovered by pushing walls onto certain empty spaces. Most of these are jewelry, which give points. Some levels have large amounts of high-scoring jewelry which can be collected after every death, which those looking to bolster their score or earn extra lives may take advantage of. Other hidden items include a catfish icon, which (given the common association between monster catfish and earthquakes in Japan) causes an earthquake to paralyze foes for a few seconds. There are also spinners which the player can freely walk over, but they will reverse the movement of any enemy that might try to walk over them.

The key to survival in Rompers is utilizing the walls defensively, and while many of the walls in the beginning are small and easy to avoid or utilize, longer walls and more complex wall placement make later stages more difficult to negotiate; one may find that a wall can’t be pushed from their side due to an obstructing wall being on the other side, and if there’s no obstructing wall on your side, enemies may very well push said wall onto you if you’re not quick enough. Taking stock of the level layout and acting accordingly is crucial

After every 10 stages, there are short cutscenes involving the game’s cast in mildly amusing situations. One features the player chasing Tsukaima, only to fall in a puddle. Another has a smoking enemy ask another monster for a light, only to be incinerated by the helping beast’s fire breath. One has Gurerin trying to sneak a peek at Lumina’s panties, which goes about as badly as one would expect. Not exactly comedy gold, here, but it breaks up the monotony. 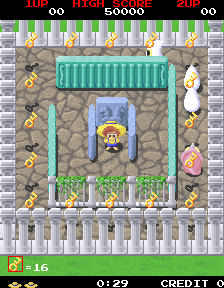 And while the core gameplay is solid, Rompers can get repetitive during its 61-stage run. That’s not to say the game doesn’t try to mix things up; it takes until Stage 31 before the player’s seen the game’s entire rogues’ gallery at least once (besides the final boss), and the occasionally clever level design, where a death or two will make you want to smack your forehead and go “oh, NOW I get it!” also keeps things from getting too stale.

The gradual, subtle changes to the level graphics also give the game some staying power. The game never looks like it’s not taking place outside of some ancient ruins, but you’ll notice grassy patches and vines giving way to trenches of glowing lava and watery aqueducts, and Greco-Roman pillars giving way to red brick and golden gates. 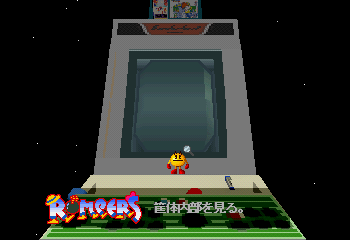 As mentioned before, Rompers was passed over for home conversion until 1997 and Namco Museum Encore, the sixth, last, and Japanese-exclusive of the PlayStation’s Namco Museums. This is a very faithful conversion of the arcade original, albeit with some of the sound effects being slightly downsampled, and the score and lives counters moved to the side to fit most 4:3 horizontal TVs (a tate option exists for those willing to turn their TVs on their side, however, allowing for a near arcade-perfect look). 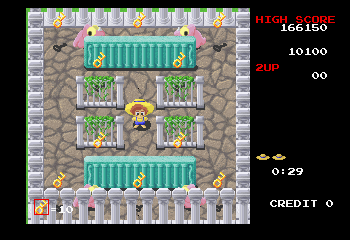 The game saves not only high scores, but also various stats and details about the player’s play tendencies. This includes total playtime, average playtime until death, the furthest a player has gotten, and even an alphabetical grade on your playing depending on how much and how well you’ve played. The compilation also features a polygonal rendition of the game’s arcade cabinet, photos of the game’s flyer and instructional panels, and access to the game’s dip switch settings. There’s no elaborate game room or museum to be perused here, though that’s due to the more streamlined-down nature of Encore itself, compared to the other PS1 entries. 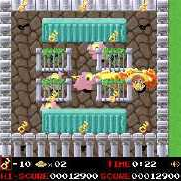 There was also an i-mode port for NTT DoCoMo phones, released in 2007, but it does not seem to be preserved or able to be emulated in any form at the current moment. The only evidence available that points to its existence is a broken link on the game’s Japanese Wikipedia page, and a couple of low-resolution screenshots, though the game does appear to be visually faithful to the original at least. 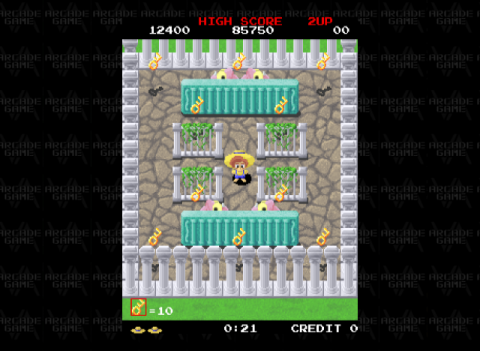 The Virtual Console version, released in 2009, is a more bare-bones affair than the earlier Namco Museum entry. The game keeps its vertical resolution in this version, with the rest of the screen surrounded by a generic Virtual Console Arcade border. The copyright screen has also been updated to not only reflect the release year for this version, but to also credit “NBGI,” Namco Bandai Games Inc.

Despite being a generally fun game, Rompers continues to be a footnote in Namco’s arcade history, and while that’s certainly a shame, it’s understandable. The game is fun, but repetitive, and the game’s characters, while cute, don’t quite have the fan appeal of, say, Wonder Momo or the power couple of Ki and Gil from the Druaga series. It’s still well worth a playthrough for anyone browsing MAME ROM sets or those interested in Namco’s arcade presence, a novel, action-y take on arcade maze games.