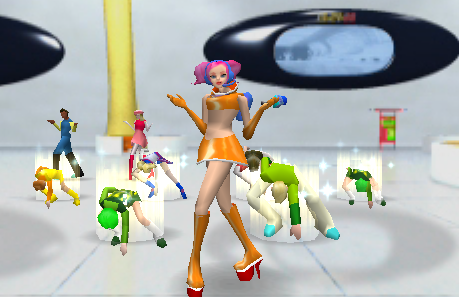 During the short life span of the Dreamcast, Sega published a number of truly fantastic, innovative games. Despite the system selling rather well initially, Sega’s horrible sense of marketing made sure that many of these titles went unrecognized, leading to the system’s eventual downfall. Thus was the fate of SEGA’s attempt at a rhythm game. Space Channel 5 is the brainchild of Tetsuya Mizuguchi, head of the 2nd party studio United Game Artists, who went on to create Rez, as well as the PSP puzzler Lumines. United Game Artists (UGA) later merged into Sonic Team, when the company was being restructured after Sammy took over Sega. 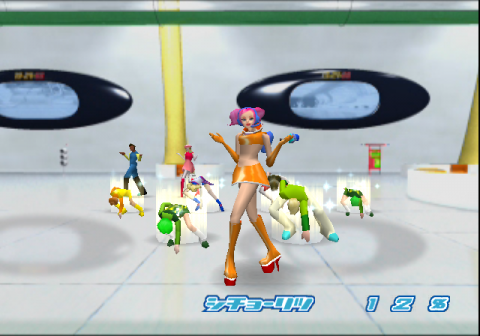 With its North American release in June 2000, Space Channel 5 was backed by a full-on advertising campaign, and subsequently flopped very hard. Pretty sad considering its semi-innovative gameplay, resembling of the earlier Parappa the Rapper. While the setting was futuristic, taking place in the year 2499, the art design and music was distinctly inspired by ’60s chic, swing and disco, making it feel right at home with the likes of Austin Powers or No One Lives Forever. All of the game’s areas boast bright colors and a certain natural, appropriate groove.

The story involves an alien invasion through the colorful little race of the Morolians. Their sinister plan? Force everyone to dance against their own will. Space Channel 5 is not only the title of the game, but also the name of what used to be one of the top broadcasting networks in the game’s universe. But its popularity has quickly diminished as other networks have stolen the ratings. Now the foxy reporter Ulala is Space Channel 5’s last hope to regain their popularity. Supported with advice by the channel’s director Fuse, her unseen constant companion, she sets out to investigate the morolian invasion. She ends up not only having to keep the show on the air, but also to defeat the Morolians and save mankind while she’s at it.

Age 22. She was saved from an explosion on a space station by a Space Channel 5 reporter when she was 12. Inspired by this incident, she became a foxy investigative reporter for SC5 herself. Unfortunately, her career hasn’t exactly taken off, yet. Yet she’s the channel’s last hope after all the other reporters have been captured and forced to dance. She likes to wear plastic mini skirts and high heels, and damn she can dance. Voiced by Apollo Smile.

Age 35. He’s on the edge of his career as Space Channel 5’s director, being pushed aside as the network went downhill. As his last resort, he supports Ulala when she’s the only reporter left, always leading her through the investigation. His name goes well with his short fuse as he gets mad at Ulala for dancing poorly. Like Charlie from Charlie’s Angels, he is never seen at all, but is only known through his groovy voice. Voiced by David Nowlin / Kerry Shale (Part 2).

Age 19. A former teen idol turned reporter, she’s quite jealous of Ulala, who’s stealing what little fame she has left, and declares herself her rival. It’s just too bad she needs saving later and has an annoying voice. Her role is somewhat expanded upon in Part 2, but thankfully her voice isn’t as soul-crushing, anymore. Despite the rivalry, she still turns to help Ulala when needed. Voiced by Sumalee Montano / Larissa Murray (Part 2).

Age 35. He comes and goes mysteriously like a ninja, but he is actually a space pirate out to sabotage the broadcasting establishment, apparently represented by Space Channel 5 and Ulala. He eventually comes through to help her, though. Always in search of truth, which gets him in quite some trouble in Part 2. Voiced by Jeff Kramer / Tom Clarke Hill (Part 2).

These cute little creatures usually “attack” in groups. They’re mischeivious, yet possess high intelligence. They’re often seen plotting by using super space creatures (the end level bosses), only for their plans to be quickly by Ulala. In the end it turns out they’re merely brainwashed through subliminal messages on their TVs, with a more sinister force behind the scheme.

Age: Over 500. Midway through development Michael Jackson expressed an interest in the project. All what became of it in the first game was a brief cameo in the final level, but he’s given a far more prominent role in Part 2 as the head of SC5. In the Japanese versions, he alone speaks in English with subtitles. Voiced by Michael Jackson. 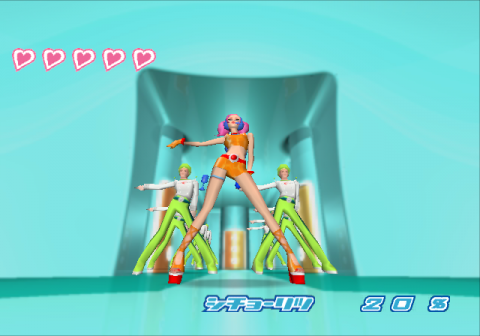 Space Channel 5 is essentially a rhythmic variation on Simon – first the opponent does some dance moves, and then Ulala has to copy them. They’ll call out any of the four cardinal directions – Up, Down, Left, Right – or “CHU!”, which means a button press. Unlike vaguely similar games like Parappa the Rapper or Gitaroo Man, there’s no visual indication for the timing of button presses – so the player not only has to remember the moves, but also be able to replicate their rhythm. If even a single move is missed, Ulala fails the segment and drops in rating (or loses a heart during “battles”). Since all this is technically a TV show, it’s essential to keep the ratings up. There’s a minimum quota that has to be met at the end of each stage, lest it starts from the beginning. The dance moves in between gameplay sections are all dependent on the current rating – at a very low rating Ulala just shakes her head in despair, while she starts prancing about more vigorously the higher her rating gets. At 95% or above (usually only achievable in the final level or on a second playthrough), Ulala starts to glow fiery pink. Naturally, all of this happens to the rhythm of spectacularly groovy music. 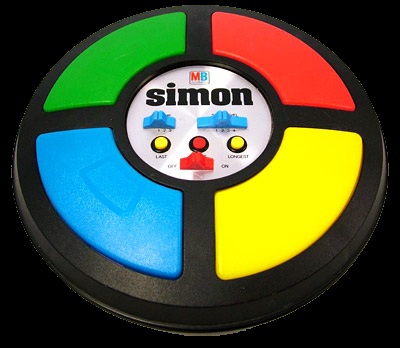 Throughout each level, Ulala either dances to defeat Morolians and save a variety of dazed hostages, or uses her gun, equipped with a stun mode for the aliens and a “love” mode for the hostages, but the controls remain the same in each segment. Once freed, the people join Ulala and march behind her in unison. When playing well, she’ll have a screen wide choreography by the end of each stage. Some particular hostages even add extra beats to the music. Every saved character is also added to a profile list, which has lots of useless, if humorous, descriptions about every NPC. At the end of each of the game’s four reports stands a glorious boss battle. All of them are broken down into numerous sections, as the boss changes its strategy before going down.

However, Space Channel 5 has one major problem: It is incredibly short, and an experienced player can easily play through its entirety in less than one hour. For a little more replay value one would expect some sort of 2-player or non-story modes, but there are none. It’s genre only appeals to a certain niche to begin with, so SEGA certainly jumped the gun when they sold the game at $30 for what looks like less than two hours of entertainment. There’s some replayability found in extra mode, but it’s essentially the same levels with some more difficult paths taken to reach the boss. 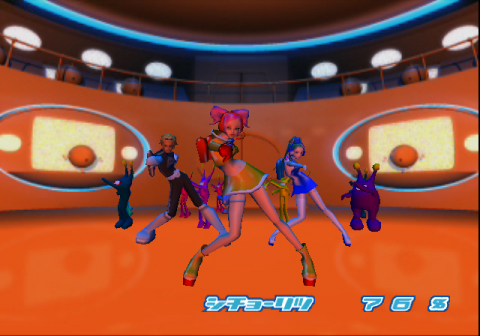 The presentation, however, is gorgeous. Most of the characters are realtime polygon models, while all of the backgrounds are prerendered FMVs. The dance moves are all choreographed quite well. They feel fluid and alive, never looking robotic and clunky at all. Progression from area to area is smoothly done, as Fuse guides Ulala along. The English voice acting is done professionally and sounds as natural as it gets, given the setting. Because of her fame at the time of being a “Live Anime Girl,” Apollo Smile was chosen to voice Ulala, and she does a terrific job. 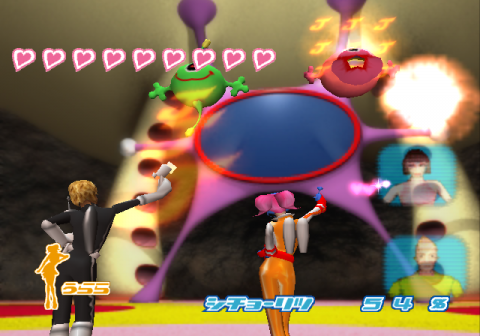 After the Dreamcast met its demise, SEGA went on to port Space Channel 5 to the PlayStation 2 for Europe in March 2002, with a Japanese release following in December. It later came out in North America as part of Space Channel 5 Special Edition, released by Agetec in November 2003. The game is exactly the same, for the most part. The Dreamcast version, however, had an issue with the pre-rendered backgrounds, which had a tendency to lose sync with the characters – although this wasn’t fixed entirely in the PlayStation 2 version, it’s far less noticeable there. There’s also a handful of additionaal voice samples for Fuse. Contrary to its sequel, the original Space Channel 5 never received an HD-makeover. Maybe SEGA doesn’t have the original data used to create the low-res background videos, anymore, or it’s simply not considered worth the effort to re-process everything. 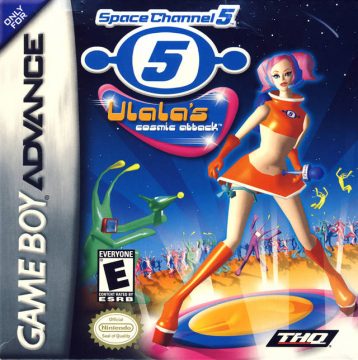 SEGA had made agreements with various development houses to create Game Boy Advance versions for many of their franchises, all to be published by THQ in North America. This resulted in some decent to great titles (Jet Grind Radio, Sonic Advance) and some not so decent ones (Crazy Taxi: Catch a Ride, Revenge of Shinobi, Altered Beast). Space Channel 5: Ulala’s Cosmic Attack ultimately falls in the latter category, but not for lack of trying. 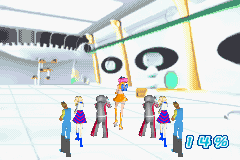 There is actually very little different from the console version of Space Channel 5. The story is the same, all 4 levels are still intact (even extra mode), character profiles are the same, even most dance patterns are the same. It’s the same game made portable. Naturally the experience suffers from the extreme downsizing, which is expected, though still disappointing. All of the characters are animated sprites, but the backgrounds have been turned into static pictures. Unfortunately, they suffer much from the lower color depth and resolution, and the result pales in comparison to the original. Also rescued hostages cycle through pretty quickly. No longer does Ulala have large groups of people dancing along with her, but only a handful of the most recently saved.

Besides a few short samples and the dance moves, the voice acting is gone as well. All the lines appear in color-coded text (pink for Ulala speaking, green for Fuse, etc.) Sometimes the text is poorly timed, so it’s hard to read it all before it disappears. Easily the worst loss, however, comes with the music. The songs all sound like crappy midi tracks, which is disappointing considering a game like Golden Sun could pull off such impressive orchestral music on the little machine. 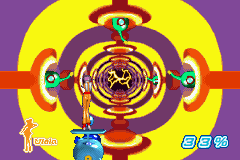 There’s not much else to say. Much like Rez, the appeal of Space Channel 5 lies in its style, presentation, and music. Tone all that down and there’s not much left other than a barebones rhythm game. Ulala’s Cosmic Attack still does have the charm of being portable, though, and only appears awful in comparison to the original. 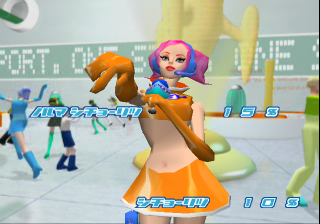 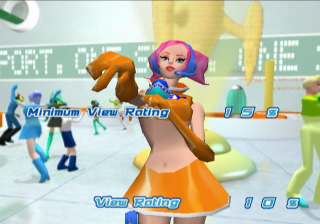 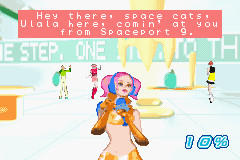 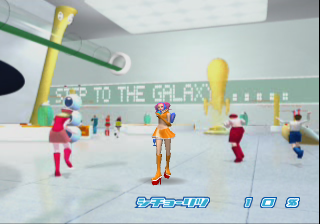 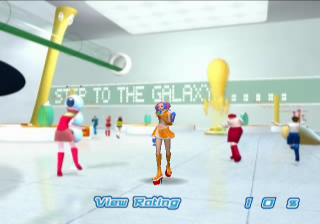