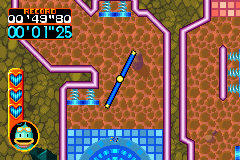 Kuru Kuru Kururin was a launch title in Europe and Japan for the Game Boy Advance in 2001, created by Eighting (originally Raizing, known for shoot-’em ups lie Soukyugurentai or fighters like Bloody Roar) and published by Nintendo. Kuru Kuru Kuruin is usually dubbed a “puzzle” game, though that’s classification doesn’t quite fit. Rather, it falls into that nebulous “other” genre, the kind of bizarre thing you’d find in the arcade back in the mid 80s. “Kuru kuru” is Japanese onomatopoeia for the sound or shape of an object spinning, which is what this game is all about.

Kururin is inspired by a carnival-type game in a Japanese game show called Ucchan Nanchan no Honou no Challenger (ウッチャンナンチャンの炎のチャレンジャー). This was later adapted officially into games for the Neo Geo (Uchhannanchan no Honoo no Challenge: Ultra Denryuu Ira Ira Bou, or The Irritating Maze in English), N64 and PlayStation, the latter of which was brought to America (somehow) under the title Irritating Stick. Your job in Irritating Stick is to guide a single stick through huge wire mazes, each filled with narrow passes and tight curves. If you touch the edges or run out of time, you lose, so it requires the kind of steady handed skill you’d need to win a board game like Operation. Irritating Stick is just as obnoxious as its title implies, but Kuru Kuru Kururin takes this basic premise and expands on it greatly. 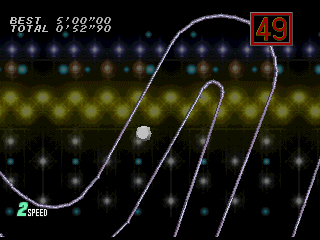 In Kuru Kuru Kururin, you must guide your hero – a little duck name Kururin, who’s piloting a helicopter called a Helirin – through a series of mazes. Unlike Irritating Stick, where the stick was static, the helicopter is always rotating. In order to survive, you need to meticulously time your movements so the blades don’t hit the walls as you deftly squeeze around corners, coordinating with the Helirin’s rotations. You can control the speed of your helicopter, and in some of the games also the speed of rotation, although you can’t stop spinning completely. You can, however, change the direction of rotation by running into springs, which are positioned strategically in many stages. Figuring out when and where to use springs plays a vital part in winning many of the stages in Kururin.

Ramming into an edge will cost you a heart, in addition to adding three seconds onto the timer. Lose all your hearts and you need to start the stage over, although there’s usually at least one “heart” section in every stage that regenerates your health. There’s no time limit per say, but you’re ranked on how fast your get through each stage, and you’re encouraged to beat them as quickly as possible. Other than some gimmicks added into the later stages – moving pistons, floating spiked balls, rotating fans, various types of enemies – that’s about all there is to Kururin, but its simple concept leads to some brutally difficult situations as you get further in the game. All of these elements make it far more interesting than Irritating Stick, which focused solely on speeding through each stage as fast as possible. 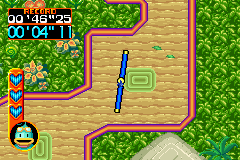 Like many Nintendo games, the world of Kururin and his family is filled with bright and colorful graphics, which works pretty well with the dimly lit screen of the original Game Boy Advance. It’s also amazing how much some pastels can brighten up a game and make it interesting compared to the terminally bland Irritating Stick. The cutscenes mostly consist of nonsense, with Kururin chatting with his pals, or being taunted by villains. These scenes are cute but can be skipped if you’re not in the mood.

There are only three titles in the series – two Game Boy Advance games, and a single console game for the Gamecube. The Kururin titles are cute, enjoyable games that exude a simplistic appeal while still providing a challenge for those who dig into it. Who knows why they never came to America – they’re overly cutesy, but that’s not something Nintendo has ever shied away from. Maybe it’s just due to their brief length – the original GBA game and the GC game can be beaten in roughly two hours, although there are still plenty of challenges to undertake to keep the game going for much longer. They’re all dirt cheap and easy to come by, so they’re definitely worth experimenting with. 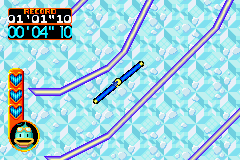 Kururin’s first adventure is pretty straightforward – tackle thirty-five levels and get to the end. The controls are simple, too – pressing either A or B will speed up the Helirin, while pressing both simultaneously will give an even quicker speed boost. The trigger buttons make funny noises, but that’s about it. It’s a cool enough game, but the problem is that it’s over before it really begins. Those thirty five stages fly by pretty quickly, and it’s not until the latter third of the game that the difficulty really picks up. Certain levels have hidden objects that may require venturing off the main path, but they’re just useless little bits that change the color of the Helirin, or little birds that perch themselves on the blades. There is a multi-player mode that allows you to connect up to four GBAs together (with a single cart) to race each other to the finish line.

There’s also a Challenge mode with a whole bunch of extra stages, but these are all really short. Additionally, there are three super difficult stages that can be unlocked by getting perfects on all levels – but that entails finishing each stage without getting hit at all, which is significantly more challenging. Still, the payoff isn’t really worth the effort, and as a result, Kuru Kuru Kururin feels like a title that was rushed for launch. It is, however, the only game in the series available in English, as it was released in Europe, but passed over for American release, at least initially. When Nintendo starting bringing GBA games to the Wii U Virtual Console, they finally released the game in North America.