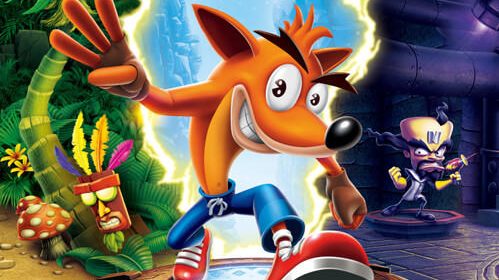 After Activision’s turn with the franchise, the last anybody had seen of the bandicoot was a somewhat dull character action game that had little of the charm of the games that followed before it. It seemed unlikely that Crash would get another game, especially in a climate where 3D platformers were such a rarity out of Nintendo’s realm. Which is why it was a rather pleasant surprise when a modern remaster of the original three Crash games were announced, perhaps with the hope that good sales would lead to a brand new entry in the franchise. Since Naughty Dog has long distanced themselves from the series, the remastering job went to Vicarious Visions, who had previously done a commendable job bringing the games to the Game Boy Advance. While this particular remaster isn’t a perfect copy of the PS1 games, it’s still a fine purchase for series newcomers and old fans alike.

Inside the trilogy are remasters for the original Crash Bandicoot, Cortex Strikes Back, and Warped. Each of the three games, while most unchanged in terms of gameplay, come with entirely redone visuals and audio, along with a few quality of life improvements. The most noteworthy change is that the original Crash now allows you to save your progress whenever you’d like, much like its sequels, and this reduces its frustration factor immensely. It’s also no longer necessary to clear a stage perfectly to earn its gem except for a small handful of levels, which makes earning full completion a lot easier. It’s still far from an easy game, but this alone makes the original version much more difficult to return to. Time trials are now available across the entire trilogy, but thankfully, you won’t require the relics you’ll earn for full completion of the first two games. It does, however, make a fun extra challenge, especially if you’re the sort who likes to compete on online leaderboards. There’s also a downloadable level for the original game, Stormy Ascent, which was cut from the original game for being too difficult.

One other change is that the physics have been tweaked somewhat, so that they remain consistent among all three games. On the plus side, this gives the original game the tighter controls that its sequels would improve on, which makes it a little less jarring to get into. However, the hitboxes have also been changed, and there are times when this can cause some annoyances. Difficult jumps now require even more precision than before, and there are times when you’ll move into a hazard or enemy that didn’t quite seem to connect. This is most evident when you’re playing the original Crash, where the platforming challenges are far more thick with enemies and obstacles to avoid.

The updated visuals do help to make up for this annoyance, however, and the power of the PlayStation 4 helps to make these games look closer to a particularly well animated CG film. The bright colors and zany art stylings still show through well, with a lot of extra, previously unseen details that add even more life to the game. Miss too many boxes in a level of the original Crash, for example, and the rain of unsmashed crates will now pummel the poor bandicoot into unconsciousness. Crash’s sister Coco is also available for play in of the platforming levels throughout the trilogy, and while she has all the same moves as her brother, she comes with her own unique set of animations that give her far more of a personality than even the original games imbued her with.

Overall, while there are a few issues to this trilogy that the miracle of patching will hopefully fix, there’s still a lot to enjoy here. Its relatively cheap price and all the bonus features on offer mean that this is probably the best way to look at what makes the series great.