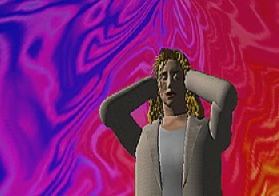 Kenji Eno is legendary. His company WARP, which only developed about 8 games, is equally legendary. The number of games increases slightly if you count subtly varied re-releases and unreleased titles, but only 4 made it to the west across a variety of systems, with WARP supporting underdog hardware such as the 3DO, Saturn, unreleased Panasonic M2 and finally Dreamcast. Eno even infamously snubbed Sony at a Sony press event, having their logo morph onscreen into Sega’s during a crowded announcement, to signify his switch of allegiance.

With everyone complaining these days about a lack of originality and experimentation, it’s interesting to realize that, apart from a puzzler and mahjong sim, WARP was relentless in its pursuit of the unusual and unique. This was perhaps its downfall, since it ceased development more than a decade ago. Over the short period that WARP operated (1994-1999), Eno pushed the boundaries of survival horror, sound usage, violence and sexuality in his games (sometimes via illegal means), while integrating disturbing surrealism in his stories. Whether it was matricidal cannibalism, a mechanical vulva, or including a free condom with games as omake, Kenji Eno deserves prideful place alongside Swery65 and Suda 51 as one of the finest examples of Japan’s WHIMSICAL★MADMEN™. 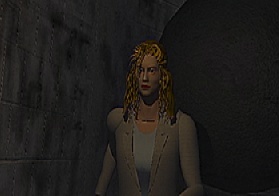 Ignoring Trip’D, a Puyo Puyo-styled puzzler on 3DO, WARP is known in the west for its D series: D, Enemy Zero, the unreleased D2 on M2, and the restarted-from-scratch D2 on Dreamcast. None of those eventually released were directly connected other than by the names of the main characters, and apart from D2 they’re almost unplayable today, but they represent an untamed slice of gaming history and offer a combination of unusual mechanics and storyline which has no equivalent.

D takes the form of an FMV-heavy adventure game, analogous to but perhaps less substantial than 7th Guest. It also introduces the blonde protagonist of Laura, an unrelated variation of whom appears in subsequent games. Released on 3DO it was then ported to the Saturn, PS1 and later PC, and released in both America and Europe. At the time it received a lot of publicity, with several full page adverts in magazines, and did reasonably well despite Sony failing to manufacture enough units for the PS1 version. 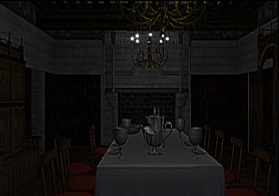 Unfortunately today D is best described as a slow two hour romp through a deserted and mostly uninteresting medieval castle – and that’s an enforced time limit, since you’re only given two hours to complete it before Game Over. There are only a few puzzles, none of which are too difficult, meaning everyone should be able to complete D on their first try. Making it equivalent to a feature film that back in the day cost an exorbitant $60 / £40 – or as much as any other, more substantial game.

The story is a disjointed mess, which isn’t inherently a problem, but it does waste a potentially very exciting opening. It starts with Laura Harris being told by police that her father, a doctor, has gone insane and barricaded himself in Los Angeles hospital. He’s also murdered everyone inside. Of course Laura goes to investigate and, once beyond the sliding doors and having witnessed the carnage, is mysteriously warped to a medieval castle in some alternate reality.

Here you’re given control of Laura, and the game plays like most adventures. You can choose which direction to go, watching a slow FMV of your footsteps there, after which you’re greeted by a static CG location you can sometimes interact with. Occasionally you find items which need to be used, and Laura can use her make-up compact to get clues. What follows is 2 hours of tedium, containing a series of increasingly asinine puzzles with an emphasis on slow backtracking between locations. 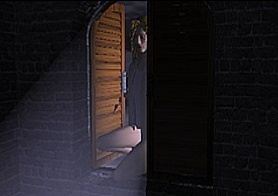 There are three main endings and the story is told through flashbacks, which for the most part feels disjointed from the game itself. The reason behind this, as revealed by Kenji Eno in an interview with Shane Bettenhausen and James Mielke on 1UP, is rather fascinating:

When I was first making D, it had no story. The game was already almost completed, so to put a story in the game, I had to insert it as flashbacks. D has cannibalism, which was a total taboo back in the day! But I wanted to put this in the game, so what I did was I didn’t show anyone else in the company those scenes. You submit the master, and they put a sticker on it, and this gets sent to the US to get printed. There was a penalty you had to pay if you’re late in submitting the master, and you’d also have to deliver it by hand. So I submitted it late on purpose. I submitted a clean one and got it approved. Then I had to bring it to America. So on the plane, I switched the discs and submitted it to 3DO, and it got manufactured like that. 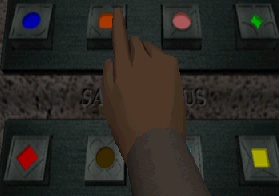 The Myst-style puzzles are very simple

The full interview on 1UP reveals a lot of fascinating anecdotes about D‘s creation. Initially just a standard adventure, the gross-out violence was added later to make it stand out. As is revealed by the end, Laura and her father are descendants of Dracula, both of them developing a craving for human flesh with the eventual outcome being transformation. In the end Laura can choose either to allow her father to eat her and transform into Dracula, or she can shoot him with a pistol and revert back to the real world. Once he dies, the alternate reality created by his mind vanishes, leaving Laura back in the corpse ridden hospital. 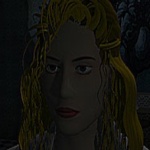 Working at a school in San Francisco, she hears of her father’s murderous rampage and drives to Los Angeles to investigate. When Laura was just a girl her mother was violently murdered and had her limbs removed. She carries a compact as a reminder of her mother. By the end it’s revealed that it was Laura who killed her mother, and she’s shown eating the limbs. 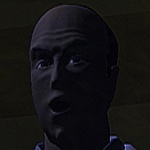 A quiet man, his sudden murderous lunacy surprises those who knew him. As it turns out he was well aware of his vampire lineage, and after Laura kills and cannibalises Mrs Harris he removes that part of her memory. In the end he reveals that, as a doctor, he was curious to see how the transformation would change him. 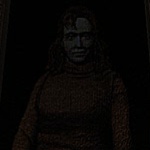 During flashbacks it’s revealed that she was in fact stabbed by her own daughter, Laura, who then proceeded to eat her. 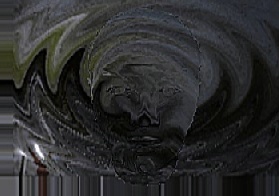 Although it retains some cult popularity on the internet, the first D just isn’t much fun by today’s standards. Beyond the extremes of its cannibalistic story, there is nothing to recommend it over any other adventure game released prior or after. Unless you’re a Kenji Eno junkie, and we’re a special breed of aficionado, anyone curious is better off watching a walkthrough on Youtube.

A 3DO re-release titled D’s Diner: Director’s Cut came out in Japan, purporting to contain additional content. It also came with an extra disc of Kenji Eno’s music from D.

Special Thanks:
Shane Bettenhausen and James Mielke of 1UP, for writing the definitive Kenji Eno interview
Rockin-B’s E0 page
Dextremes for the E0 guide
This Flickr account for hi-res E0 images
Unseen 64 for screens of the cancelled D2
GameFAN scans courtesy of Topdrunkee
xMehL on Youtube for providing an E0 walkthrough video. It’s better than playing the actual game!
Marc Lalonde for his D2 script dump.

Justin Hall for his Photo of Kenji Eno
Also, check out Dieubussy’s interview with Kenji Eno on Coregamer.
Plus, additional scans of interviews with Eno courtesy of TeamAndromeda on NTSC-uk.